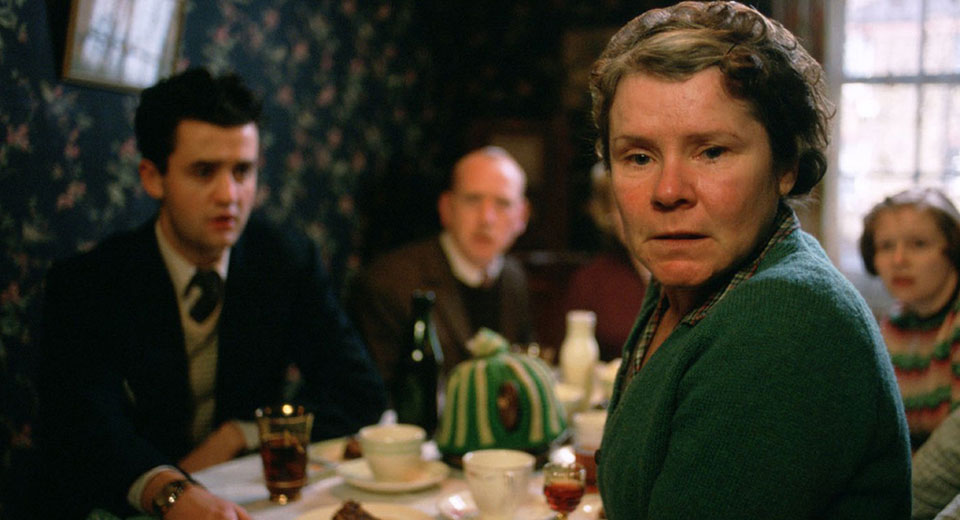 In the UK, abortion was legalized in 1967 (except in Northern Ireland, which currently has the strictest abortion laws in the EU). But in 1950, when Mike Leigh's Vera Drake (2004) is set, abortion was subject to Section 58 of the Offenses Against the Person Act of 1861, which we hear a lot about as we witness the workings of the British criminal justice system from investigation to sentencing.

Shot on a modest budget in Super 16, Vera Drake immediately strikes the eye with the grit of postwar London, all wool and brick and soot. Vera (Imelda Staunton) is the bustling matriarch of a working-class nuclear family so wholesome it'll make you want to make Britain great again. She cleans posh families' houses while her husband, Stanley, runs an auto repair shop. Her son, Sid, is a tailor, and her daughter, Ethel, works on a lightbulb assembly line. Postwar belt-tightening is palpable; they live in a cramped two-room flat and gasp in horror when aunt Joyce wants to drop £35 on a television. Iconic UK consumer products like Vim, McVitie's, and Typhoo will transport you to the other side of the pond, as will the British knack for dry understatement, like when Stanley says of the war, "It wasn't cozy for anyone, was it?"

Postwar England was a little like present-day New York—everyone had a side hustle. Sid trades nylons and cigarettes on the black market, and Vera "helps girls who are in trouble." Her equipment is rudimentary (a Higginson syringe, a vat, some carbolic soap), her patient approach a bit casual ("All you need now is a nice cup of tea"), and her motivations rather nebulous (when asked why she did it, she sobs "I had to"). Her family has a hard time understanding what drove her, but Stanley supports her categorically ("Whatever she's done, she done it out of the kindness of her heart"). There is something so heartbreakingly earnest about Leigh's characters. Although Vera Drake is glossier than High Hopes or Meantime, fans will identify Reg and Ethel as a traditional Mike Leigh couple—painfully awkward around each other, lacking the most rudimentary ability to express affection, yet truly and honestly caring about one another.

I wish there were a sequel. Will Vera join the ranks of the tough repeat-offender abortionists she meets in gaol, or will her punishment be the deterrent the magistrate hopes?