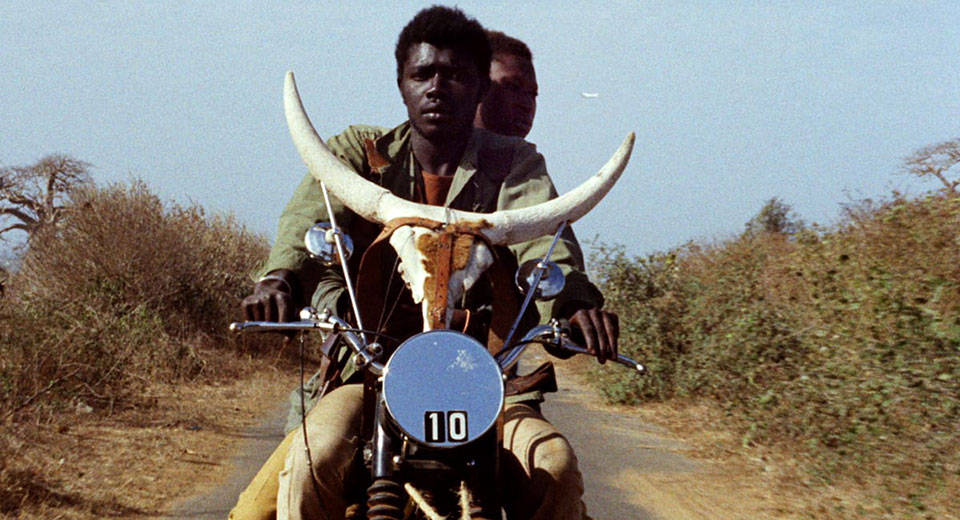 Today BAM screens Djibril Diop Mambety‘s anti-colonial post-Nouvelle Vague crime romp, Touki Bouki. Counted among the most important works of West African cinema, along with those of fellow-Senegalese Ousmane Sembène and Mali’s Souleymane Cissé, Touki Bouki is a formally adventurous take-down of the futile dreams of wealth and refinement that French colonialism never tired of imposing on the populations of its outre-mer territories. Through associative montage, layered narrative temporalities, and a thoroughly liberated use of sound, Mambéty has crafted an enigmatic yet jaunty picaresque that takes us from the slums around Dakar to its European-capital-simulating center.

The film follows Anta and Mory (Mareme Niang and Magaye Niang), a couple of hippy-marginals who make their living by hustling and whose dissolute life-paths incur the resentment of their families. They’re marginal even with regard to the margin: they reject the pitiful ways of earning one’s keep left to the inhabitants of the Medina (the “native quarter”) and decide to fake it ‘til they make it, to steal and cheat their way to the appearance of success. For them, Senegal is an obstacle to happiness, empty and unworthy of care. The colony is nothing, while the true life to which they are entitled awaits them on the other side of the Mediterranean. “[They] do not dream of building castles in Africa; they dream of finding some sort of Atlantis overseas,” Mambéty said in a 1998 interview. This attitude is a result of one of the most violent and insidious operations of colonialism: the de-valuation of the colony to the level of a perpetually inadequate imitation of the metropolis.

One of the most striking features of Touki Bouki is its colors (thanks, no doubt, to the abundant beneficence of Martin Scorsese’s World Cinema Foundation). In the opening sequence, the credits roll over a tranquil image of a young boy herding water buffalo down a country road, accompanied by the playful sounds of indigenous flutes. Then, an abrupt cut to the same buffalo in a slaughterhouse. The flutes are gone, replaced by the naked sounds of chains and frightened animals. A buffalo is wrestled to the ground and its throat is slit (neither swiftly nor gracefully). The images of its hot blood rushing out and its legs twitching are out of focus, possibly mimicking the perception of slaughterhouse employees accustomed to such brutal visions. The motif of animal sacrifice recurs, as when Mory’s persecution at the hands of sexist student revolutionaries is intercut with images of villagers slaughtering a goat, its blood spurting onto a bright yellow piece of scrap metal. And plastic has never been as beautiful as when the shantytown’s women flock to the communal water line with buckets in half a dozen bright colors, the refracted sunlight dancing through the translucent plastic as the pails bob up and down on the women’s heads.

We see several signifiers of industrial capitalism dotting the landscape—from Mobil oil tanks to enormous Renault ads—but the chief object of Mambéty’s scorn are those Senegalese who enthusiastically welcome all attempts to “improve relations” with the former imperialist powers. This critique is reiterated in Ousmane Sembène’s searing Xala (1975), in which it’s no longer the old colonial rulers that make life miserable for the Senegalese, but the new class of indigenous administrators and bureaucrats. In Touki Bouki, this trend is represented by Charlie, a frivolous homosexual whose gigolo house guests wear white Jackie Onassis shades and drink fruity cocktails by the pool outside his Italian-style mansion. After Mory steals Charlie’s entire wardrobe to look successful, Charlie calls the prefecture and asks for all the top-ranking police officials by name until—in a semi-Hitchcockian cameo—he reaches Inspector Mambéty, who apologizes for not coming to Charlie’s most recent party and promises to take care of his problem. The symbiosis of coercive state power and the hegemonic power of Senegal’s nouveaux-richesis stripped of its garish silk robes.