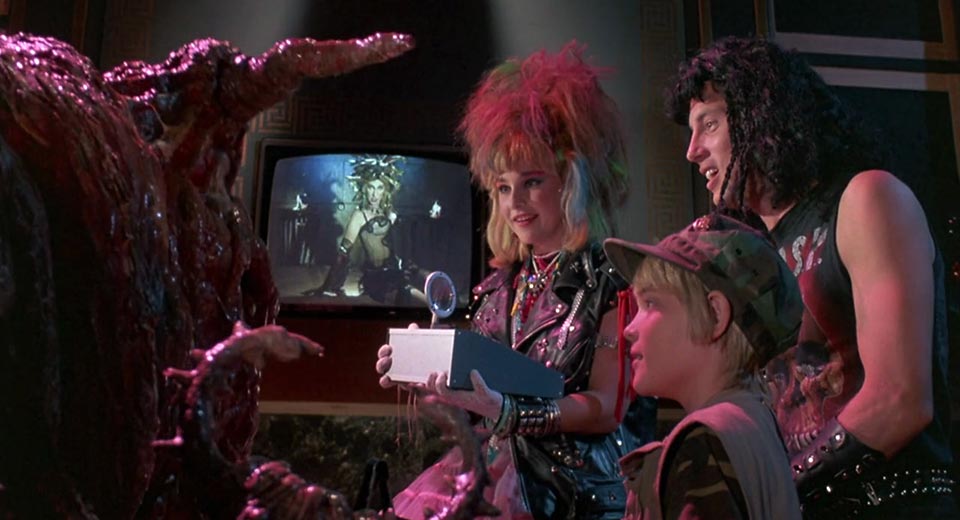 The Medium is the Massacre series reaches peak absurdist-horror tonight with double feature of The Lawnmower Man and TerrorVision , just in time for viewers to submerge themselves in worlds far away from all-too-imminent Election Day anxieties.

The 9:00 pm screening at Anthology Film Archives is TerrorVision (Ted Nicolaou, 1986), screening with Max Almy's Lost in the Pictures . From the cartoonish opening scene of galactic waste bouncing off of planets and into the screen followed by a sitcom-intro theme song (original soundtrack by 80s LA art rock band The Fibonaccis!), at no point does TerrorVision pretend like it doesn’t know exactly what it’s doing: essentialised kitsch. We’re swiftly introduced to a range of exaggerated SoCal characters: Mom and Dad (Warhol superstar Mary Woronov and Gerrit Graham) planning to spend their evening “swinging” with the help of the classified ads, Cyndi Lauper-esque MTV-obsessed teen daughter (Diane Franklin) and “metal band” boyfriend (Jon Gries), and the war-obsessed, survivalist duo, son and grandpa (Chad Allen and Bert Remsen).

This absurdist hyper-reality isn’t limited to the characters, though. The Putterman family home—referred to primarily as the Pleasure Palace by the parents extremely eager to show off to their dates—is covered in gaudy pink-and-gold faux Roman column, vaguely erotic statues, and bootleg sexy Patrick Nagel prints. The newest addition is a home television satellite, the Do-It-Yourself 100 model. But along with MTV, Channel 69, and a B-movie version of Elvira introducing other B-movies ("Medusa") comes the Hungry Beast, a "common household pet" from the planet Pluton that is super into devouring everything in sight, especially humans. A low-level government employee pleads with Earth inhabitants to destroy all of their televisions for the next 200 years in an attempt to block the Hungry Beast from arriving (and from saving his own job), but is met with deaf (or distracted) ears. Predictably, the Hungry Beast appears out of the television, dog-like, and proceeds to casually attempt to eat everyone, as well as impersonate them when it’s comedically convenient.

For me, what causes TerrorVision to rise up over all the other “so bad, it's good” horror flicks of the 1980s is the transparently earnest attitude to create a film unequivocally ridiculous and continuously entertaining. Television signal problems, outlandish B-movie gore, “wild parties”—all of this and more wrapped up in this elusive and (much like Diane Franklin’s Rainbow Brite hair) vivid 35mm print!