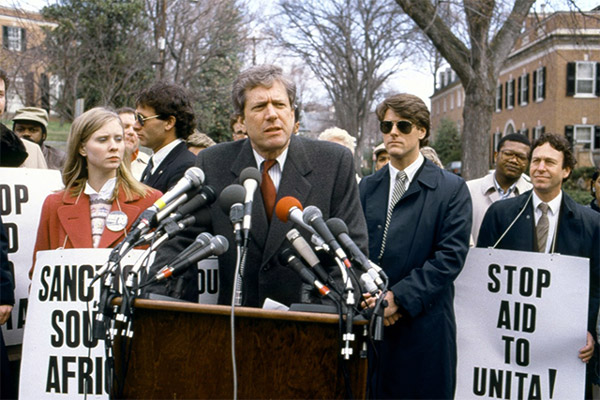 Robert Altman’s talent for melding fiction and what passes for reality reaches disorienting heights in the 11-episode television series Tanner ‘88. With Altman’s camera and crew camouflaged among the network news covering the 1988 Democratic primary race, his fictional candidate Jack Tanner (Michael Murphy) rubs shoulders and shakes hands with the oblivious likes of Bob Dole and Pat Robertson on the campaign trail. Tanner is a 60s era idealist who brags about knowing all of the Beatles’ names and, if elected, plans to make Studs Terkel his Secretary of Labor. He’s also a master of platitudes who really, really wants to win, and is only somewhat conflicted about what he might have to do in order to become President. Together with his college-aged daughter (Cynthia Nixon), a leftist activist who frequently gets him into trouble, his chain-smoking campaign manager (Pamela Reed) and a bevy of aides, wranglers and press, he stumps under the slogan “For Real”, focus-grouping his way toward the Democratic National Convention. Trailing in popularity behind Michael Dukakis, his strategists have him play the renegade, calling for the legalization of marijuana and a global boycott of South Africa. He tells Jesse Jackson that America is ready for a Black president, they’re just not ready for Jesse Jackson. Skewering Republicans would have been much too easy for Altman, a lifelong democrat, and Tanner ’88 delivers a clever indictment of the politics-as-marketing that turns the ideals of the civil rights era into toothless banalities.

Not-quite-equal-parts mockumentary, documentary and soap opera, (Altman called it “two-thirds scripted and one-third found art”) Tanner ’88 is a groundbreaking television experiment which has already birthed several inferior generations of reality and reality-like TV. Altman lingers over the details that make up the lives of people who steer the political process for a living, from quibbling over how best to edit a campaign commercial to the surreal humiliation of having the same inane conversations over and over again. Despite showing actual politicians in action, the film is most documentary-like in the way it depicts the involved ways that these professionals hawk their wares. His guerrilla filmmaking at the Democratic convention became a news item in itself; CNN covered the show and Altman filmed their coverage, saying, “We’ll be in your picture. You’ll be in our picture.” While filming scenes at the convention and other events, Altman’s cameras prompted news crews to run over and start filming too, thinking they were missing out on something newsworthy. The day after Michael Dukakis won the Democratic nomination, his wife Kitty Dukakis filmed a scene for Tanner ’88 in which she consoles Tanner’s girlfriend after his loss to Dukakis. She surely uttered many of the same words to other, real people that day. Altman remarked, “No one knows what side of the glass they are on anymore.”