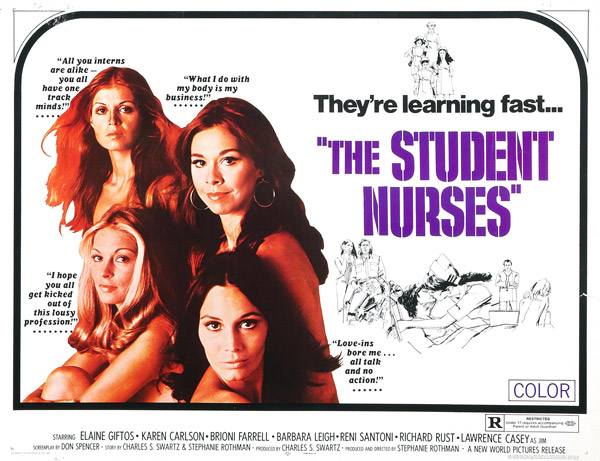 Stephanie Rothman’s 1973 film Student Nurses has it all: love-ins, LSD, unplanned pregnancy, illegal abortion and run-ins with violent revolutionary Chicanos. These and other topical adventures befall a group of four nursing students who share an apartment and commiserate about men, scarf/blouse combinations and work-life balance.

Rothman adds feminist themes and clever sarcasm to the obligatory nudity and inane plot points in Student Nurses, the second film made for Roger Corman’s New World Pictures. This is not to say she undermines that not-so-ethereal style and substance we expect from an exploitation film; and in fact she quite ably doles out tits and near-rapes (including one possibly record-setting example that occurs within the first thirty seconds of the film). She seems able to embrace and employ the raison d’être of the genre, which saw filmmakers at small independent production companies delving into some of the darkest and most uncomfortable regions of our collective psyche, even if it was to make a quick buck.

Rothman’s nurses talk to one another about the hypocrisy of men and their control over women’s bodies, an inability to experience sexual pleasure and about how they can find something meaningful to do with their lives. Their teacher, an older female nurse, encourages them to plan for the future, while a male doctor jokes that they’ll get married instead but “get their RN in case of a divorce.” Rothman cuts back and forth between one nurse having sex and another in the midst of an abortion.

Student Nurses heralded a series of nurse-related films such as Private Duty Nurses, Night Call Nurses, The Young Nurses and Candy Stripe Nurses. Audience enthusiasm for seeing women take off their shirts while performing familiar jobs spurred New World and others to make films about teachers (The Student Teachers, Summer School Teachers) and stewardesses (Fly Me, Superchick and Blazing Stewardesses). The women-in-prison category followed, and has what are arguably the best titles: The Big Doll House, The Big Bird Cage, The Big Bust Out, Caged Heat and The Hot Box, which manages to be about nurses who are also in prison.