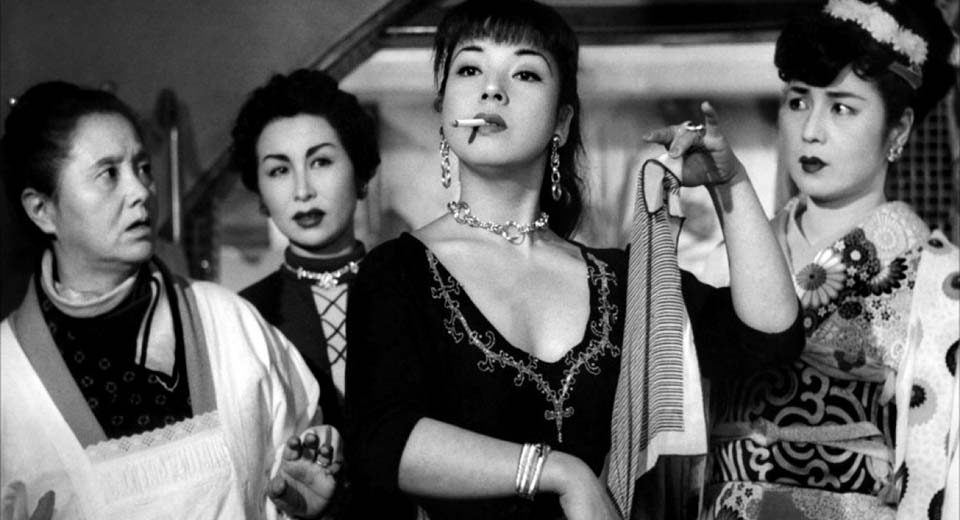 With a string of films in the mid-1950's director Kenji Mizoguchi and cameraman Kazuo Miyagawa perfected a blend of the former's taste for obsessive melodrama, and the latter's knack for making spatially complex images with the simplest of materials. Ugetsu and Sansho the Bailiff—both allegorical period films in the jidaigeki style—are their best known collaborations. But 1956’s Street of Shame, their depictiction of the post-war working conditions of Tokyo sex workers, was the pair’s most aesthetically ambitious movie, and the clearest indication of how Mizoguchi felt about the world that he lived in.

After a slow pan across the rooftops of the Yoshiwara redlight districts, the film introduces its mid-50’s Tokyo milieu with a conversation between a friendly neighborhood policeman and the madam of a brothel. We learn that the government is voting on a prostitution ban—it isn’t the first time—and the madame opines, “Yoshiwara is 300 years old. Does an unnecessary business last so long?” From there, the film uses Mizoguchi’s elliptical shorthand to sketch out the lives of the five women who work as prostitutes at the euphemistically named Dreamland. While on the clock, they wear expensive kimonos, laugh like boozy chorus girls, and literally throw themselves at any man that passes by on the street. But, after work, life is different. One of the women has a newborn and a TB racked husband to feed. Another is a widow with a teenage son who disowns her. And each of the other women have similarly desperate reasons for selling themselves as their means to get by.

Though mostly shot on studio built sets, the world that we're shown feels like it was shot on location. Miyagawa's pearly, after hours images are partly to blame. But equal credit goes to the cast—including the legendary Machiko Kyō as the good-for-nothing new girl—who squeeze every last drop of honest pathos from a script that's oppressively melodramatic even by Mizoguchi's standards.