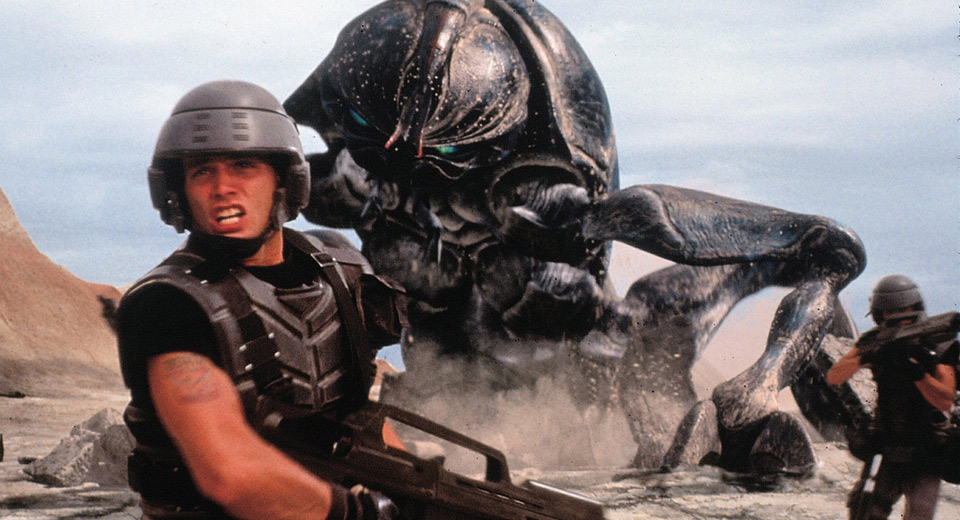 Although the response to Paul Verhoeven's Starship Troopers (1997) was polarized between accusations of neo-Nazism and praise for its satirical genius, almost everyone saw the politics of its source text, Robert Heinlein's 1959 novel of the same name, as militaristic and authoritarian. In Heinlein's future society, military service is a precondition of citizenship and voting rights, democracy a privilege to be earned rather than a birthright. I don't know whether Heinlein actually advocated this kind of political system, but a glance at the epigraphs at the head of each chapter—from Founding Thomases Paine and Jefferson, among others—makes it clear that, for Heinlein, freedom isn't free.

Half a century later, Verhoeven decided to troll the viewing public with an exaggerated version of Heinlein's premise, a gleaming "fascist utopia" (Verhoeven's words) in which a global government sends young, brainwashed recruits to fight suicidal wars against foreign species on wasteland planets. It boggles the mind that nearly every critic missed the movie's front-and-center satire at the time of its release. Verhoeven has stated that the opening recruitment commercial ("I'm doing my part!") is a direct copy of Triumph of the Will, and the Federation's flag has an unmistakably Teutonic eagle on it. (When Columbia Studios executives saw the final cut, they protested about the heroes' "Nazi flag," to which Verhoeven replied, "No … it's completely different colors.") What's more disheartening is that the numerous sequels also seem to have missed the point. Phil Tippett, the visual FX whiz who was responsible for RoboCop and Jurassic Park and designed the arachnid antagonists of Starship Troopers, went on to direct Starship Troopers 2: Hero of the Federation, which started an avalanche of sequels, spin-off games, and even a bizarre 1999-2000 computer-animated TV show.

Verhoeven has said that he chose his actors for their classical beauty and wholesome innocence, happy perfect-looking citizens for his glowing fatherland, like Riefenstahl's flaxen Hitlerjugend. Casper Van Dien possesses especially action-figure-like features, down to his hairless torso. Rounding out the Aryan cast is Neil Patrick Harris in what Verhoeven intended to be an explicitly SS-reminiscent black uniform, complete with peaked cap.

Starship Troopers may not be Verhoeven's best (does Total Recall hold that title?), but it has to be my favorite Denise Richards movie.