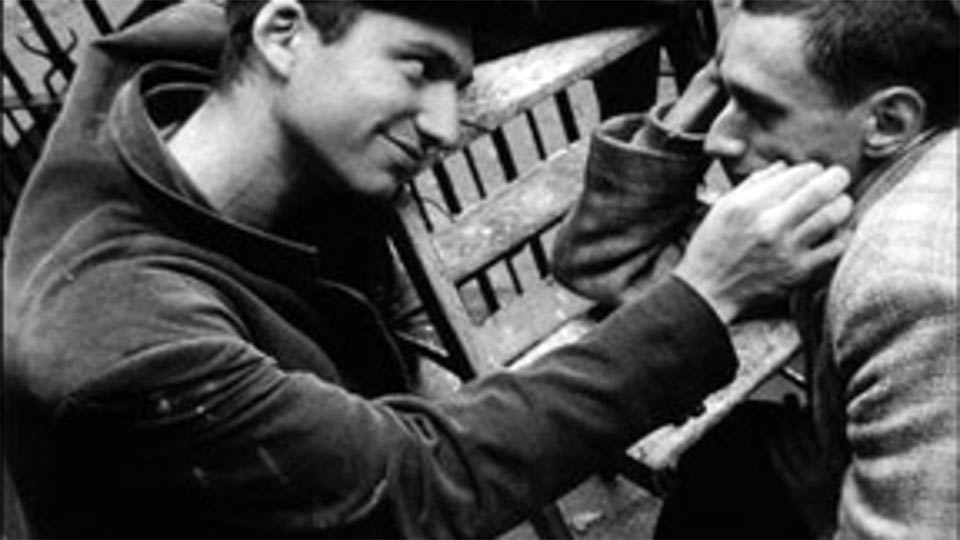 Ken Jacobs does not wish you a happy Thanksgiving weekend. He opens Star Spangled to Death in a junkyard and never leaves, spending nearly the next seven hours in the cosmic dump that is the settler-colonial cesspool of Amerikkkan culture. Not so much his masterpiece as his trash-heap Colossus, the film imagines the exhaustion of the late 1950s from the horror of the Bush II years. Watching it in these waning days of Trumpism and the dawn of the more polished Bidenist neocon renaissance is a nightmare of historicity, a reminder that the nightmare is history. Jacobs recently uploaded the film to Vimeo for free, and watching it might be the only way to survive the coming year.

Those who are here for Jack Smith’s queer antics will be appeased by his immediate appearance and then immediately tormented by his long disappearances. “Let’s assume this movie is for you,” an early text-screen muses; “This would mean you hardly stand a chance.” Having given us two minutes of Smith, Jacobs pours screens of text, a diatribe noting (accurately) that George W. Bush — “the Twentieth Hijacker” — at best allowed 9/11 to happen, and then launches into a full half-hour found short-film, an ethnographic documentary of suffocating condescension toward the “simple, primitive people” of an African tribe brought the “blessings of civilization” by white interlopers. Brief cutaways to New York, images from the racist history of American animation, and some gurgled Blonde Cobra-style narration offer light remixing, but mostly Jacobs subjects us to the document as originally presented.

Such is the pattern; he means the to Death seriously. A New Deal booster short with George Washington, Abraham Lincoln, and Woodrow Wilson appearing in a dream to bring inspiration to a frustrated songwriter for a would-be anthem for the National Recovery Administration; baby monkeys essentially being psychologically tortured in the name of family science for a television segment; scenes from Cecil B. DeMille’s The Crusades (1935) sprawled out interminably before us — and that’s just the first two hours, punctuated periodically by Smith, playing The Spirit Not of Life But of Living, traipsing around the Lower East Side, foppish in rags and bearing a mop, having the same bemusing effect on passers-by that Divine would later have on downtown Baltimore gawkers in early John Waters films. Against him, Jerry Sims plays, simply, Suffering. Somehow, Jacobs resists anyone appearing as the Angel of History.

Like much durational cinema, Star Spangled achieves a feeling of permanence and plateaus there, locking us in stasis; we stop clocking it by the midpoint, give up on anticipating the end or even anything and surrender to the excruciating, interminable entirety of Richard Nixon's clumsy, sweaty Checkers speech (with Pat heaving out dubbed-in sighs of dubious meaning). Does it work? Of course not; failure is Jacobs’s game. But as a sculpture of cultural detritus, it holds together with remarkable architectural unity. When Ub Iwerk’s nightmarish animated short The Pincushion Man (1935) introduces the third chapter, it jars precisely because it works so well as a standalone, while everything else feels part of a larger work, unthinkable as viewable unto itself.

Jacobs carries his textual polemics across the film, sometimes pausing for such stark declaration as “Israel is a crime committed by Christians against both Arabs and Jews,” other times flashing walls of prose so subliminal that even a pause button barely helps without first slowing the speed down to catch them. As always, his politics are broadly socialist and anti-authoritarian, muddled by conspiratorial thinking and a commitment to both-sides deflection of critique of Israel, coming from a place of despair haunted by a lived memory of the Holocaust. This heaviness permeates Jacobs’s work even at its zaniest, as beatnik bohemians performing catatonia on tenement fire-escape stairs discernibly carry the weight of history on their slouched backs. Without that context, Star Spangled might be unendurable rather than the captivating but cerebral gravity it exerts.

In the final two hours, attention skews toward Sims as Suffering, putzing around with friends on piers against a Manhattan skyline. Some color footage disrupts the grey. He burns a “Put Some ‘GO’ in Government” poster for Nelson Rockefeller’s gubernatorial run. As befitting its filmmaker, its title, and its gestalt, Star Spangled traffics little in moments of redemption. But even Jacobs is not immune to, well, little stabs of happiness, and before things end on a bittersweet note of madcap visual footage of Smith, Sims, and friends cheerfully goofing below text reminding us that the Sixties and their aftermath landed devastatingly on this scene, he allows us at least a brief utopian glimpse, at a 2003 antiwar protest in midtown Manhattan, where amid the anarchists and drum-circles his now-digital video camera captures “the Spirit of Jack”: a young man in cargo pants and oversized knitted orange hat, furry rainbow tail dangling as he dances a flamboyant jig for life, against the war, as Jacobs called an omnibus film in 1967, a queer sprite to curse George W. Bush, Rudy Giuliani, and the death and destruction they wrought. “Next year in Israelstine,” Jacobs concludes. Creatures still flame. Happy Thanksgiving after all, with all that entails.

This piece is dedicated to the film scholar Hannah Frank, who celebrated and promoted Star Spangled to Death at every opportunity. Her untimely passing in 2017 leaves the world without her second book project that would have prominently featured the film, but she carefully documented its many cats in a tumblr dedicated to the cats of radical cinema we ran together. Offered in feline solidarity forever.