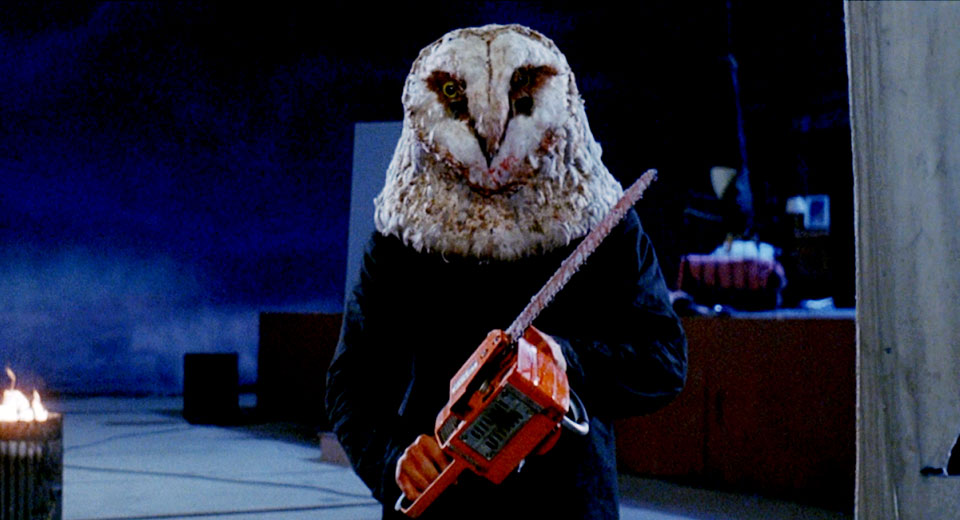 Detractors might glance askew at the wonderfully lurid StageFright (aka Aquarius, aka Deliria) and dismiss it as peak Italo-80s excess, cranking the dumbest elements of Flashdance and Friday the 13th to eleven. But actor-turned-director Michele Soavi skews baroque with his first feature, giving what should be all cheesy surface a solid backbone, and creating a locked-room slasher poking fun at genre conventions while presenting its giallo plot straight-faced. (Soavi’s deadpan humor in the face of utter ludicrousness wouldn’t show up until Cemetery Man). The plot has a hefty horror pedigree, penned by Sheila Goldberg (who also wrote Umberto Lenzi’s Ghosthouse) and giallo mainstay George Eastman (former Warrior of the Wasteland ), who also plays the man under the owl mask. Soavi himself makes an appearance as a guileless police officer, and the film appropriately screens at Alamo Drafthouse’s Terror Tuesday.

Despite working with Lucio Fulci, Lamberto Bava, Dario Argento, and Joe D’Amato (who produced StageFright), Soavi later said he “didn’t feel ready to direct” when offered the opportunity. You’d never guess it, as StageFright confidently blasts open with stylishly choreographed sleaze set to wailing saxophone as a Franju-inspired bird-headed killer attacks. The scene’s revealed as the play-within-a-play put on by tyrannically bitchy director Peter (David Brandon), so desperate for a hit that he’s willing to fire lead actress Alicia (Barbara Cupisti) for briefly sneaking off-set with the costume designer to get her ankle checked. Unfortunately for all, the ladies went to the nearest psychiatric hospital, attracting the attention of deranged prisoner/former actor Irving Wallace, who follows them back like an animated cat wafting on pie scent. After Wallace’s first murder is discovered outside the theater, Peter goes full Grand Guignol, remodelling the play’s anonymous killer after Wallace and locking everyone in to rehearse even more so they can open earlier and capitalize on the audience’s morbid curiosity.

Of course, they’ve locked the killer in with them, and the remainder of the film is a series of surprisingly effective kill scenes underscoring the lesson, never trust a Theatre Kid — it’ll always be about the drama. As with the best gialli, StageFright does a lot with a little; for all the film’s bombast, it’s small moments of humanity that make each death more brutal, and creative camera angles turn a closed set into a claustrophobic backstage maze. After a while you also have to admire the sheer ingenuity and determination of Wallace, a true master of his craft (murder, that is). The film’s final coda is Soavi’s jab at American slashers, long since on the wane with increasingly rote franchise entries, but it’s films like StageFright (and international peers Anguish, Evil Dead Trap, and Don’t Panic) that showed killers could still go big, it’s just the genre that got small.