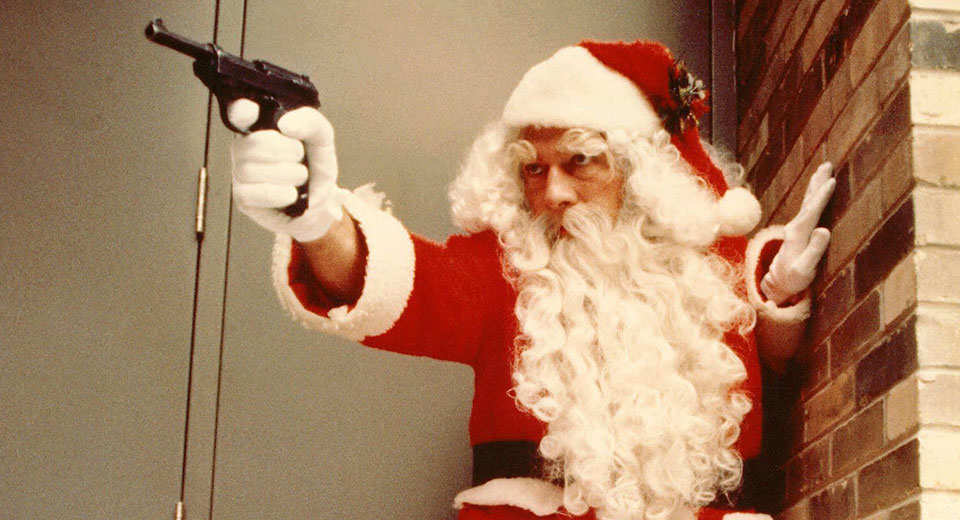 Opening with one of the best title cards of any holiday film, The Silent Partner lays the Christmas on thick with “Joy to the World” on the soundtrack and a shopping mall full of decorations and seasonal garb adorned shoppers and staff. And then there’s the requisite mall Santa, with a menacing Christopher Plummer under the red suit and bushy beard. But this only sets the stage for one of the meanest genre films of the 70s, Christmas setting or not.

The early scenes of The Silent Partner help to both set the conflict as well as the kitsch factor of the shopping mall of the era — the “Bankers Do It With Interest” t-shirt worn by a bank teller is a highlight — which are in natural contrast with each other. Arguments could be made about commercialism (remember that this is a Canadian production) but we aren’t in Dawn of the Dead territory here, as The Silent Partner is ultimately far more concerned with what happens in the aftermath of the moments in the mall than it is with the heist that starts it all off.

And about that heist: Santa (Plummer) holds up seventies mainstay Elliott Gould, as a mall bank vault manager, with a scrawled out note that reads “I have a gun, hand over the cash” and, well, cash is handed over. But maybe not all of it. And therein lies the conflict. Beyond the various instances of Plummer dressed as Santa (including an escalator shooting and him responding unfavorably to an overzealous child), The Silent Partner is more interested in Gould and Plummer chasing after each other — and anyone else in their way — than holiday shenanigans. Dead Bang this ain’t.

It would be easy to assume that The Silent Partner is an American film, but you can tell that it’s a Canadian production as soon as we are shown the money in the bank. It’s part of the “tax shelter” era of Canadian cinema, where film investments made between 1975 and 1982 could be entirely deducted, greatly increasing the amount of films being made in the country in those years. Obviously, this lead to a lot of exploitation film. The Silent Partner is an interesting case, as it’s a revered film that was met with critical praise and awards recognition yet is unabashedly sleazy and brutal — a montage featuring Plummer stripping and beating a woman in a sauna is admittedly still hard to watch over forty years later — and was also produced by Carolco Pictures who would go on to major success just a few years later with First Blood.

It may not be the first genre film people think about when the holidays roll around, but The Silent Partner is a deserving entry in the Christmas Crime Canon alongside films like Dead Bang, Cash On Demand and The Ice Harvest. It’s a decidedly mean film, which starkly contrasts with the joy of the season, but it’s written and directed well enough (directed by Payday director Daryl Duke and co-written by Curtis Hanson) that it isn’t only defined by its more exploitation leaning excesses. At the very least, it will make you look twice at the next mall Santa that you come into contact with.

The Silent Partner is streaming on the Criterion Channel