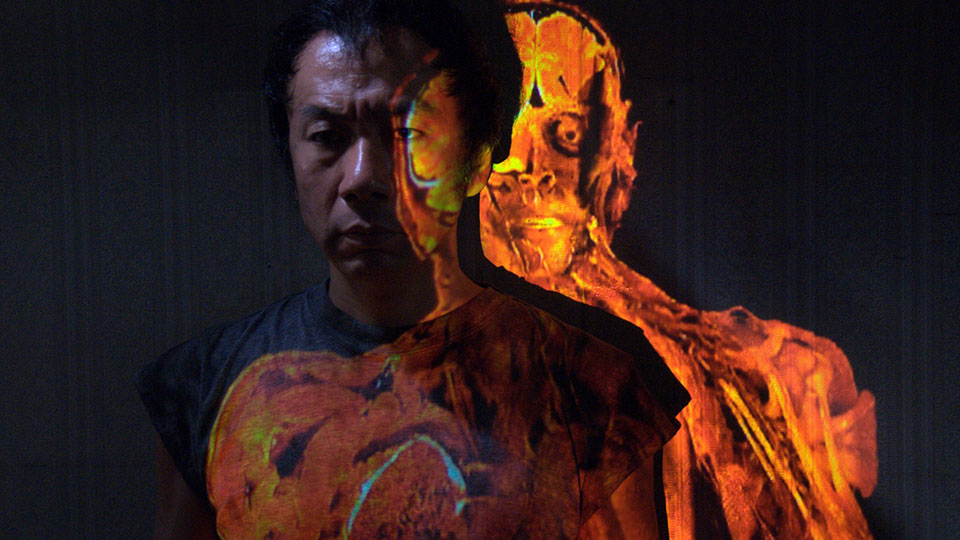 I had the pleasure of reviewing Killing as part of Screen Slate’s TIFF coverage - a stripped down, concentrated extension of the director’s previous anti-war film Fires On The Plain, Killing is minimalist as a noh play, ditching the larger theater of warfare for a tight triangle of conflict. Young ronin Mokunoshin Tsuzuki (Sôsuke Ikematsu) lives by the sword but, in an era of unprecedented peace, never actually wielded it. Admiring his skills, experienced samurai Sawamura (Tsukamoto) wants Mokunoshin to follow him to the city and fight in the brewing civil war. Mokunoshin’s reluctance towards bloodshed earns him the scorn of village girl Yu (Yû Aoi) and increasing ire of Sawamura. A gang of bandits’ arrival on the village outskirts sets off a chain of events that force Mokunoshin’s hand.

Tsukamoto will be awarded the 2019 CUT ABOVE Award For Outstanding Achievement In Film in person before the screening. Screen Slate had a golden opportunity to speak with him about his latest film, his working process, and dangling hope for a future kaiju eiga. Many thanks to Kazu Watanabe, Christian Barclay, and everyone at Japan Society for arranging the interview, and special thanks to interpreter Aiko Masubuchi. 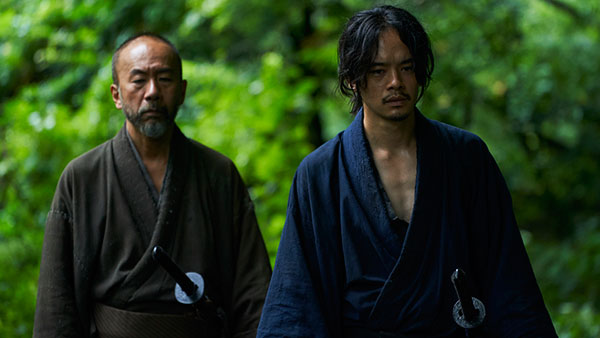 Danielle Burgos: Your films often feature determined women who know what they want, stuck between a confident and hesitant man. They’re often the point where violence and eroticism cross, especially Yu in Killing. Can you talk about that?

Shinya Tsukamoto: So this is actually difficult for me to explain in a way, because a lot of it comes from intuition and feelings. I didn’t necessarily have a constructed idea in making this character, especially Yu’s character in the film. But one idea I had is that I wanted Yu’s character to be as close as possible to an audience perspective as possible. And so perhaps, one thing is that Yu’s character, having a lover [Mokunoshin] go to war, she doesn’t like that idea. Or having scary people around and being fearful about that. In some ways she too has a lot of weaknesses about her, but in order to have something also very appealing, I needed her to be very honest in the ways that she acts, and also very passionate, showing a lot of passion. I wanted the drama to move forward through her, and through these passionate moments. I’m having a little bit of a hard time explaining in words, but as you said, she is sort of in between Mokunoshin’s character and mine - one who is very good with the sword and another who isn’t. She’s very stuck in between, but I felt that could be very close to an audience’s perspective.

DB: It seems to be a theme in your films as well though, like Hizuru in Tokyo Fist or Chisato in Bullet Ballet, there’s a man who’s more passive and a man who’s more forthright, and the woman is very aware of what she wants, even if it’s her agency to pick something...not in her own best interest.

ST: Yeah, so you sort of explain it in these ways, and I wonder why it often happens to me that way; it sort of happens naturally as I’m making these dramas happen. When you explain them as this more forthright, strong man versus a passive man, after making my films in my mind the impression that I end up getting is that the woman actually ends up being the strongest character, despite all that.

ST: (laughs) ...and I think the men oftentimes are just trying to *act* strong. Then when I look at the women I’ve been depicting, they’re the ones with their feet on the ground. And the men fighting feel like flies buzzing around trying to annoy each other.

DB: Variety said you’d have to be an “unabashed fan” to “find either excitement or pleasure” in Killing, “notable for its oddly murky visuals and unimpressive fight sequences”. So, they completely missed the point... It’s a jidaigeki without flashy wuxia choreography, and the movie gets literally darker, dimmer, as it goes on. Can you talk about those cinematography choices?

ST: I actually agree - the film ended up being a very sedated, darker film, and even I think it’s perhaps a film that is harder to be understood than some of my other films. But for myself I think, when I look at Japan and look at the world at large, I can’t help but to feel this fear about living in the world today, and therefore I can’t have a positive conclusion. I ended up concluding the way I do.

Regarding the images in the film, I wanted to bring forth the idea of a very beautiful abundance in nature against and contrasted with humans. The humans being more, feeling more grimy and full of dirt, and bloody, and all those ways. I wanted to contrast that with these landscapes of beautiful nature. But as you said, the more that the swords are being swung around, the cinematography does get darker and darker.

DB: That was actually my next question; You called the film a “historical drama addressing modern issues” - it ends bleakly, literally with a scream - I was going to ask, is that how you feel about the future?

ST: Looking at the world at large, but especially Japan, I think compared to the environment that I was raised in my childhood, where I didn’t necessarily think about political themes in general...but now when I look at Japan today, especially 70 years after WWII has ended, I do feel that there has been a sudden and drastic change in the direction the country is going. Japan used to be about never touching anything related to war and trying to stay away from war, yet now today things have changed drastically. They’re getting armed to create war. So for me, I’m thinking with a lot of fear and fright about this situation. I think that ends up appearing in my films.

DB: I think that’s why the movie will be welcome here in America, because there’s a similar… men who are presenting the sword without realizing the consequences of it and asking other people to take on that violence, and people who are horrified at the prospect. That’s where we are. 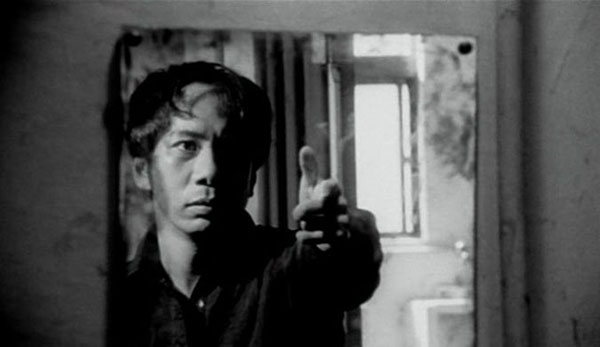 DB: I did also want to talk about the nuts and bolts of your cinematography; how did you actually film this? Did you have any discussion about what you wanted as you were in so much of the movie?

ST: From the very early stages of my filmmaking career, whenever I’m not in front of the camera, I’ve always been the one holding the camera and shooting. It’s only when I’m actually in front of it that I have others hold the camera. Up until and in my 20s, I was very much involved in the independent scene, but once I was in my 30s I got a larger staff, and by then…the last time I was in New York [in 2010] with the Tribeca film festival with Tetsuo: Bullet Man, that’s the last time I was here. After that, I went back to very small scale film production again. I had very little money to work with and a very small budget. And so I went back to picking up my own camera.

For the last 10 years I’ve been working with the same assistant director [Satoshi Hayashi], who also does lighting and camera, starting with the film Kodoko. We’ve worked together on Fires on the Plain, and Killing. Again, when I am in front of the camera, he’s holding the camera. With the two of us, we really understand each other almost without words, so we work together very well in that way. Also at the same time I draw very detailed….

ST: Storyboards! I do very detailed storyboarding, so that also helps as well.

DB: Were the storyboards used for Killing’s choreography, the actual sword fighting? Or was that organic?

ST: With some parts where I find it’s necessary, I do a very detailed storyboard, especially when it’s something very technical. But this isn’t an action film that I’m trying to make, it’s closer to showing some kind of reality, so when there are these action scenes, what I do is have the action captured from various directions with multiple cameras, and it’s through the editing that I pare that down.

DB: In one interview, you’d said editing was your version of sword fighting for Killing, since there wasn’t much fighting the movie. This was also Chu Ishikawa’s final score, and you’d mentioned having to find pieces that he didn’t release yet. If you could talk about that process and your editing process, I’d love to hear about it.

ST: First regarding working with Ishikawa-san’s music: before going into the film, I had asked him to please do the music, and he said yes. Ishikawa-san always had issues with his physical abilities because he had a major surgery when he was young. Usually when I work with him, I have him watch everything after the editing is done and then have him write music for it. Because he passed away during the editing, he actually didn’t see the film at all. In my mind I knew then I should look for somebody else for the film, but I still wanted to work with Ishikawa-san’s music. It became a way for me to memorialize and think of him. What I did was listen to everything that he’s made, and started pasting pieces of his music into the film, try to think about what could fit within the film.

But I still didn’t have quite enough, so I asked Ishikawa-san’s wife to collect all the music that he had made in his life. I had to be careful about not using the music that had already been used for other films, so we asked her to take out all the music that’d already been used before. Then I worked with whatever was left and started pasting sounds to the film. Through this I was able to feel like I was spending time with Ishikawa-san and really think about him, memorialize and think about him in that way.

When I first used his music with Tetsuo: Iron Man he didn’t really know about film music at all, so what I ended up doing back then was also taking the music he had and pasting it together. In a way it ended up being that the last film I did with him was a very similar process to the first.

It doesn’t quite answer your question about the sword fighting idea, which…I’m not entirely sure what I meant back then! But regarding the editing process: so this film, we actually shot it all in three weeks. It was a very short shoot compared to all my other films. But what I wanted to make sure was that I really captured the heat of the protagonist through the short shooting period. What I did end up doing was spending a much longer time with the materials themselves. I spent about half a year working through the editing, and also with sound, and really feeling very precious with the material in that way. 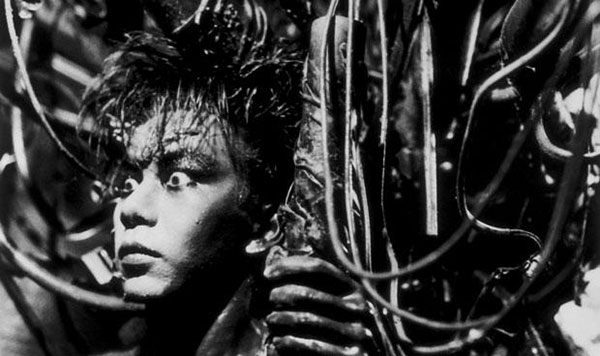 DB: In an interview a few years back, you said you’d like to do a jidaigeki and a kaiju eiga - now that you’ve made your jidaigeki, any plans for the latter beyond (hopefully) reappearing in Shin Godzilla 2 at some point?

ST: I don’t have plans, but I still do want to - I even have in my mind what kind of kaiju would fight against the protagonist kaiju. I hope within my lifetime I can at least make one.

DB: I would hope so very much as well. Thank you so much for your time.