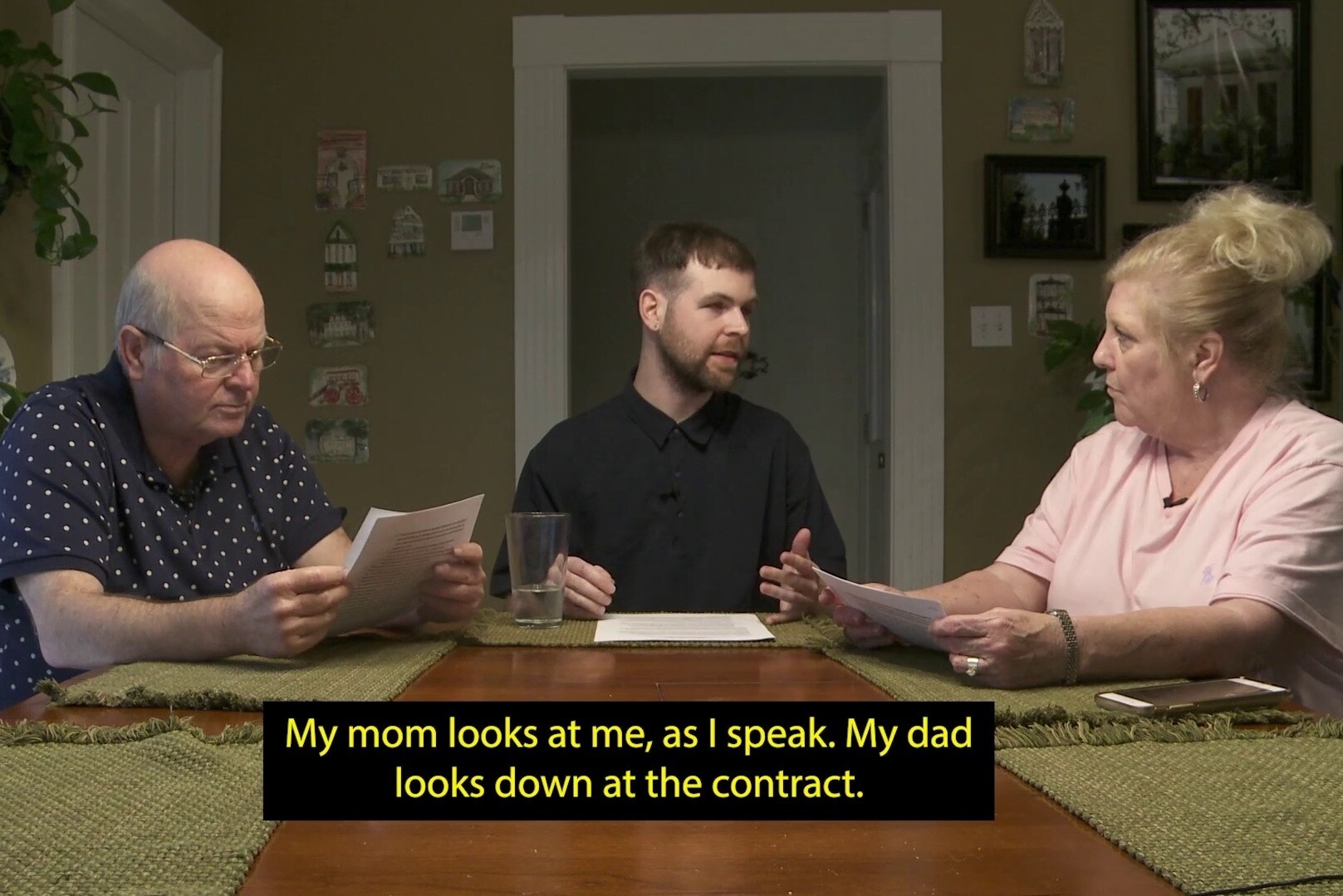 In the iconic trailer for Robert Bresson’s L’Argent (1983), money transfers repeatedly from ATMs to human hands. The action is mechanical and discreet, and the only faces appear on banknotes: staid representatives of a cruelly efficient economy.

A similar sequence occurs in Jordan Lord’s Shared Resources as the filmmaker’s father, Albert Lord, pulls into an ATM drive-through. Over the image, Albert recounts his work as a bank debt collector. Soon after, the shot repeats, but this time Albert is telling a story about his own father: when he died, Albert was shocked to find he had twenty-six credit cards in his name. Jordan joins the voiceover, pondering, “How does a life become information?”

This scene could be a statement of purpose for Shared Resources (2021), and its formulation as a question reflects Lord’s experimental approach to the subject: their family’s own history with debt. After Hurricane Katrina destroyed their home and Albert was fired from his job at the bank, the Lord family accrued an enormous amount of debt, compounded by a promise Albert made that he would fund Jordan’s education at Columbia University, shouldering a cost well beyond his means. Albert declared Chapter 13 bankruptcy, intending to repay the debt over several years. The film chronicles this period of time, interrogating both the personal and legal dimensions of their financial precarity, and the filmmaker's entanglement in it.

Key to the film’s emotional charge is its framing of documentary filmmaking as a contractual and extractive process, and the demands it makes of Albert and Deborah (Jordan’s mother) to describe and recall events from their own lives for the camera. This performance of memory is constantly related to the debt collection procedures that catalog and divvy up the value of their assets, including the body itself. Albert collects disability insurance and uses it to repay their debt. Meanwhile, the portrayal of his physical weaknesses becomes a point of contention between him and Jordan, who screens portions of the film back to their family and captures their reactions.

Unlike with Bresson’s minimalism, the repetitions of Shared Resources result in an excess of information, heaped on by audio description (performed by different members of the Lord family) and hardcoded closed captions. These devices, which enable access for disabled viewers, might overwhelm others, as they can never be switched off. By foregrounding disability, Lord creates a film not only about debt, but also the fatigue it engenders. It’s a tremendous evocation of exhaustion, the process of aging, the maintenance of security (in one's own life and image), and above all, capitalism's breathless bureaucracies.