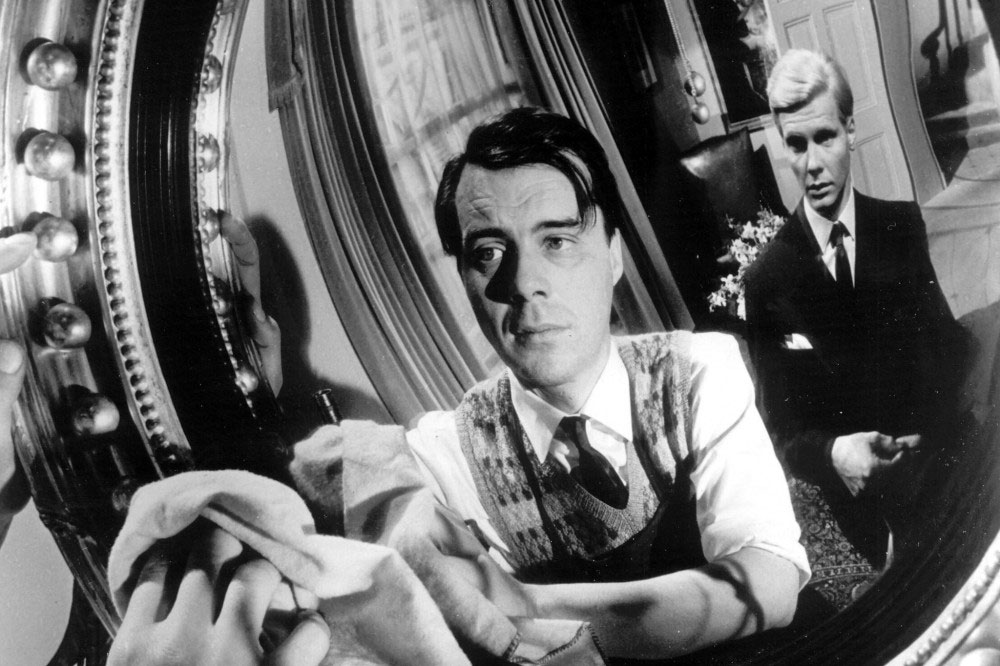 The Servant, Joseph Losey and Harold Pinter’s first collaboration, was released in the UK in 1963—the same year the Profumo scandal shook the British ruling class. John Profumo, the War Secretary in Harold Macmillan’s Conservative government, had an extramarital affair with a 19-year-old model, then lied about it to the House of Commons. Macmillan resigned, the credibility of his administration destroyed, and the following year, the Labour Party defeated the Conservative government in the 1964 general election.

An inappropriate relationship is the catalyst for an eventual change in leadership in The Servant, as well. The feckless aristocrat Tony (James Fox) hires Barrett (Dirk Bogarde) as his butler, charging the fastidious gentleman’s gentleman with the renovation of his newly purchased Knightsbridge townhouse. Given carte blanche by Tony, Barrett decorates the house to his own taste, filling the space with items, actions, and even people of his choosing. After pressuring Tony to hire a maid, Barrett eventually gets his way and brings in his “sister”, the lascivious, mini-skirted Vera (Sarah Miles). At Barrett’s quiet urging, Tony begins a sexual relationship with Vera. The affair alienates his snooty, upper crust fiancée Susan (Wendy Craig), who has been disgusted by Barrett and the latitude Tony gives him from their first meeting.

The film’s third act brings a Three Women-esque reversal of power, in which a besotted and dependent Tony becomes first his servant’s equal and then his inferior. But Barrett doesn’t simply establish himself above Tony, he takes over his former master. By fulfilling, anticipating, and eventually, creating his employer’s desires, Barrett moves into Tony’s enraptured body as he once moved into his house; and there, he establishes a new administration.

With this corporeal takeover, The Servant connects itself to both “Good god, man!” British gothic novels like Dr. Jekyll and Mr. Hyde and Frankenstein, and the sociopolitical climate of 1960s Britain. In Alexander Walker’s seminal book Hollywood U.K. (1974), the British film critic calls The Servant one of the events that breached the “moral cordon sanitaire” in a year of rumors, doubts, suspicions, and scandals that “threatened virtually to destroy all credibility in our rulers and ‘our betters.’” The fall of men like Macmillan and Tony and the class distinctions they represent, signifies the susceptibility of an entire body. The way The Servant penetrates this particular societal anxiety might make it, though an unofficial entry in the genre, the ultimate British horror film.

The Servant screens through March 17 at Film Forum in a new digital restoration.