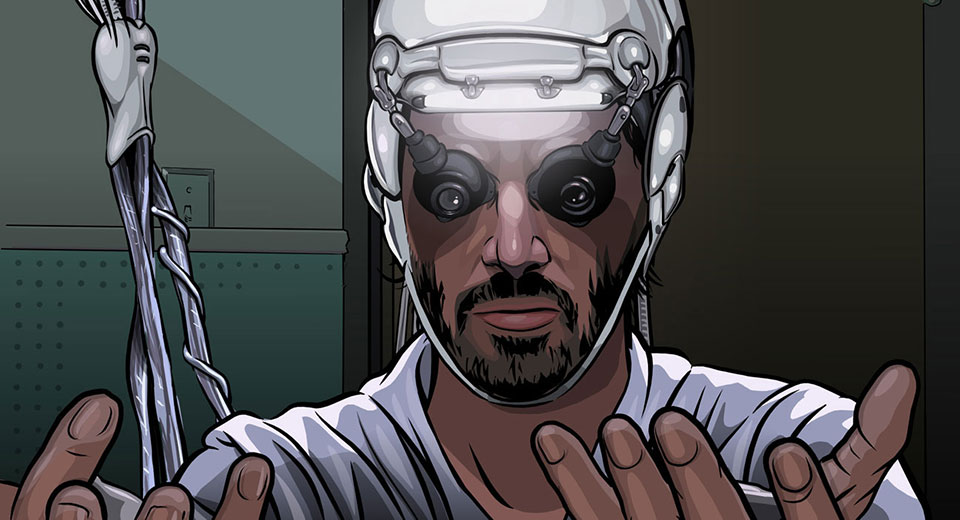 Legendary science fiction author Philip K. Dick—whose novels and short stories have been turned into both classics like Blade Runner (1982) and Total Recall (1990) and failures like Paycheck (2003)—took a more autobiographical turn in his near-future-set 1977 novel A Scanner Darkly. By setting the narrative in the early 1990s, Dick distanced himself from his immediate temporal context to better conceptualize it. He had already demonstrated an uncanny ability to distill hisorico-cultural periods to their essential forms in 1959’s Time Out of Joint, whose protagonist lives in a simulated 1950s Potemkin village and eventually starts to suspect its inauthenticity. The seventies for Dick were a time of personal loss, when many of his friends succumbed to various drugs and either died, went insane, or were incarcerated. A Scanner Darkly was written both as a testament to their memory and as a warning about addiction and the industries that thrive on it.

For his 2006 adaptation, Richard Linklater assembled a cast of “free-thinking, radical, quasioutsider types of people”: Keanu Reeves as Bob Arctor, a deep-undercover narc quickly approaching total neurological burnout, Robert Downey Jr. and Woody Harrelson as his—respectively—conspiracy-obsessed and endearingly incompetent roommates, and Winona Ryder as his cagey girlfriend whose twitchiness really does indicate a hidden identity. Paranoia (both founded and unfounded) is one of the film’s major themes: Arctor’s about being outed and—later—about having become his character (and maybe never really having been his former self in the first place), his roommates about being constantly monitored and tracked by unknown organizations (which turns out to be true), and their friend Freck’s about being covered in aphids.

A not-irrelevant tangent about aphids: Freck’s obsession with these highly efficiently reproducing plant lice reveals a major difficulty of literary adaptation. In the first scene, we see Freck feverishly scrubbing his body, his hair, and even his dog in a steaming shower. This frenzy takes up enough screen time to make it obvious that Freck’s fear is disproportionate to the real danger, but the novel tells us that his desperate quest for purity regularly makes him spend eight hours in the scalding shower. A small verbal gesture reveals the pathological extent of Freck’s precautions, which a film would have to use much less economical methods to communicate.

The movie uses the same unsettling animation technique Linklater had previously employed in Waking Life (2001), tracing over photographed images in solid colors and defined outlines and thus unmooring the characters from objects in their environment, which seem to float around each other while never making contact. When asked whether this effect would tempt people to see the film in altered states, Linklater said it “would be ironic if people were getting super stoned” considering what a “cautionary, somber tale” it’s supposed to be. So just know that if you sneak a blunt in MoMA’s bathroom at five minutes to showtime, you’re disrespecting both authors’ intentions.