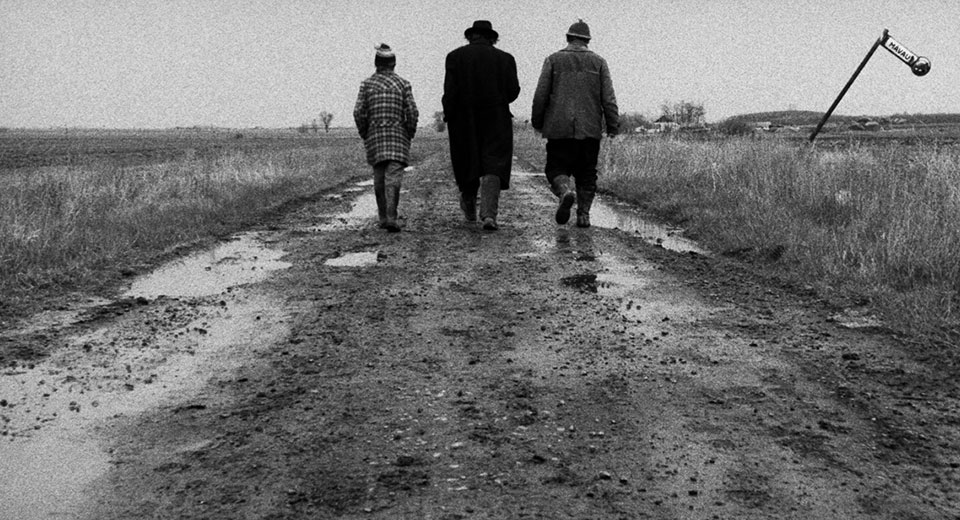 Head here for Patrick Dahl's long-form essay on the restoration of Sátántangó, including interviews with Béla Tarr and Craig Rogers of Arbelos Films.

We also have an interview by K.F. Watanabe with Aiko Masubuchi, programmer of the series "Shitamachi: Tales of Downtown Tokyo," which begins today at Film Forum.

At a comical acceleration, the lives of even the most ardent cinephiles have grown inhospitable to Sátántangó since its premiere in 1994. Carving out seven internet-free hours to take in the film’s 171 shots (average length: ~2.5 minutes) which chronicle the consistently bleak and often hilarious collapse of a collective farm certainly requires an audience possessed of uncommon dedication and generosity. Like LSD or Star Wars, if you don’t think you’d enjoy yourself, you’re probably right. But the film doesn’t earn a fraction of its reputation as a miserablist ass-punisher. Surrender to the leviathan, and you enter a cinematic space of unparalleled plenitude. Join its rhythm and for a day abandon the relentless, futile tension of pre-digested film grammar in favor of rejuvenating unpredictability. It is a refuge from smart phones and dumb, nihilistic movies.

Director Béla Tarr (who remains adamant that co-writer László Krasznahorkai [author of the source novel], editor Ágnes Hranitzky and actor/composer Mihály Vig receive co-equal credit as filmmaking partners) introduces us to an unnamed Hungarian village as a small herd of cattle are released into a muddy field. For ten minutes they graze, complain, pace about and attempt to mount one another resembling the desperate people who take them to market. The meager fortune the villagers receive for their herd spawns a series of alliances and schemes hatched to escape their shared misery. When Irimiás (played by Vig) imperiously descends upon the frayed collective, they succumb to his hollow promises of prosperity on a nearby estate. He is, in truth, a vagabond and would-be government agent who smells a herd in search of a shepherd. They’ve been abandoned by God and history, but Tarr’s captivating gaze insists we see in them ourselves.

The camera circumgyrates slowly around the characters as they piss, drink, dance, and die under torrents of rain. They fastidiously record each other’s movements, impressively balance bread on their foreheads, bash out drones on an accordion, destroy a cabinet with fire axes, and walk long stretches, all of which Tarr presents without interruption. If editing permits a film to operate like a nervous system of frenzied signals, Sátántangó’sballetic long-take choreography ambulates at the pace of the body. The paradoxical effect of this deceleration approximates the awe shared by 19th-century audiences pleased by the sheer novelty of a moving picture. Without a shot/countershot system or a two-hour running time to guide anticipation, we attach ourselves to each unfolding, uncertain moment.