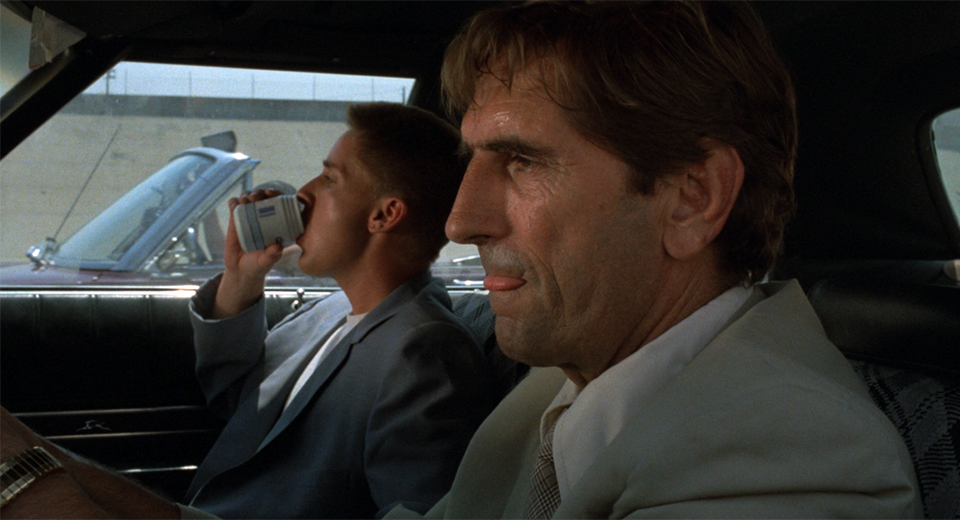 Upon recently watching Repo Man (1984) for the first time since high school (when I was arguably the perfect viewer for such a movie: a smarter-than-thou punk with undercooked politics), I found myself wistfully wishing for more films like it. Alex Cox’s first feature remains as impressive as ever—it’s a trip around dingy, desolate 1980s Los Angeles that hovers slightly above our real world one minute and then slam-dances on the pavement the next before it takes off into outer space.

Broke, dumped, and fired from his mind-numbing job at the supermarket, a bratty L.A. punk named Otto (Emilio Estevez) is recruited into the “always intense” world of auto-repossession by Bud (played by the one and only Harry Dean Stanton), a square at first glance who lives hard but pontificates harder. Their exploits bring them crashing into the hunt for a special 1964 Chevy Malibu that is dragging a hefty reward and some extraterrestrial interests along with it.

Repo Man is, simply, very cool: it has a great West Coast punk soundtrack (including a theme song by Iggy Pop), a subplot about aliens and a government cover-up, political satire and snarky anti-consumerism that stands the test of time surprisingly well, and of course one of Harry Dean Stanton’s most memorable roles. His performance as Bud solidifies the outlook of the film: cynical yet fun, forever an outsider, walking towards the end of the world with some swagger. In other words, pretty punk.

Cox says that Repo Man is about nuclear war “and the demented society that contemplated the possibility thereof.” All of the repo men we encounter in the film have a value system of some kind (most preach it out loud to anyone who will listen), some code or concept of self that establishes them as individuals, as men, criminals, or as simply worth something in a world that disgusts them. It takes a literal spaceship to give anyone a ticket out: a reminder that despite attempts to wreck or subvert the system from the inside, we’ll still wind up stuck among, and most likely will be, the ordinary fucking people.