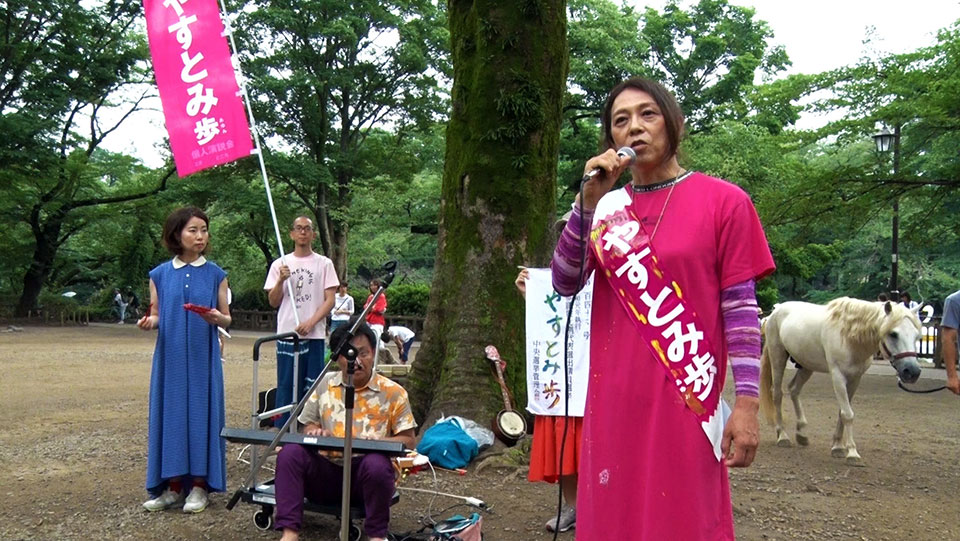 Kazuo Hara’s career has been a tenacious, never-ending search for people whose behavior (or, indeed, whose very existence) is a threat to a tranquil but stifling social order in Japan. Starting with his debut Goodbye CP (1972), which depicts disability activists refusing to sit in their wheelchairs and stripping naked to expose their stigmatized bodies to a scornful society, each of Hara’s documentaries attempts to both give his marginalized subjects a platform as well as to use their anger to galvanize his audience.

Screening in this year’s Japan Cuts film festival, Hara’s latest film Reiwa Uprising (2019) continues in this vein. He begins the film by explaining how it came into being: we are shown a clip from his Youtube channel in which he interviews Ayumi Yasutomi, a transgender economics professor and erstwhile mayoral candidate who calls for change in Japanese society and politics. Impressed by her anti-establishment views, Hara says that if she runs for office again, he’ll make a film of it. “That can be my motivation,” she replies, upon which a title card appears: “It was a joke… that became reality!!!”

Aside from showcasing the use of diverse media which Hara has lately acquired a penchant for — in Reiwa we get colorful title cards, YouTube screen caps, tweets, cartoonish sound effects, and even an animation of a cicada defecating on Prime Minister Shinzo Abe’s face — this opening establishes the symbiotic relationship between filmmaker and subject that is key to Hara’s modus operandi. Yasutomi’s iconoclasm scratches Hara’s itch to crack at the clean surface of Japanese society, while Hara’s camera gives Yasutomi the platform she wants in order to promote her unconventional views.

Over the next four hours, Hara fastidiously presents a day-by-day chronicle of Yasutomi’s bizarre campaign for a seat in Japan’s House of Councillors. It’s clear from the get-go that Yasutomi is interested not in winning votes but in using the election as a stage upon which she can mount her social critique. In the dozens of speeches we see her make, she rails against a society that teaches people to see only instrumental value in things. But rather than lay out policy, she tries to raise awareness about this by bringing a horse to all of her events, entreating passing pedestrians not to listen to her speech but rather to pet the horse and interact with a creature that has no concept of money but is simply content to live. Along similar lines, she repeatedly criticizes the suppression of childrens’ creativity, culminating in a flash mob dance of Michael Jackson’s “Thriller”, which Yasutomi interprets as a metaphorical text describing how society turns children into mindless zombies. This scene, for which exorbitant royalties forced Hara to replace Jackson’s music with farcical sound effects, is one of the film’s comic highlights.

While the focus is undoubtedly on Yasutomi’s campaign-cum-performance-art, Hara broadens its scope with interviews and speeches of the other nine candidates of the Reiwa Shinsengumi, the newly-formed anti-establishment party with which Yasutomi is aligned. From Teruko Watanabe, a formerly homeless single mother who advocates for the poor, to Eiko Kimura, who draws on her experiences with severe disabilities to promote better care systems, each of them is an outsider fighting an ossified political system. By documenting their struggles in addition to Yasutomi’s, Hara creates a veritable panorama of political discontent in contemporary Japan.

“Politics cannot change without an angry battle,” Hara says in an interview with Kimura towards the end of the film. Reiwa Uprising is the work of a lifelong agitator who wants to show us how much there is to be angry about and to document the struggle of those who rise up against it.