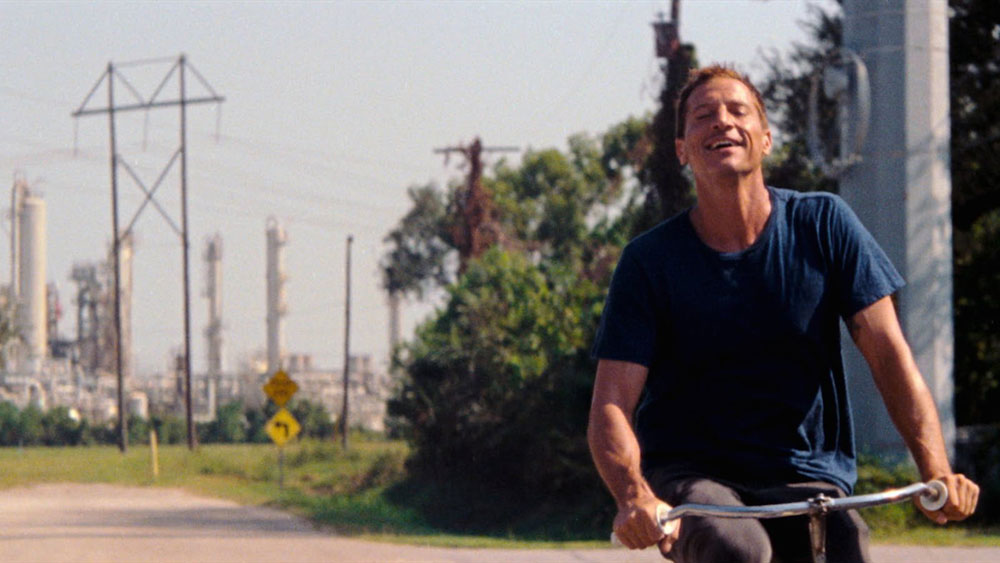 In its two-hour runtime, Red Rocket features four iterations of "Bye Bye Bye," the lead single off of NSYNC's No Strings Attached (2000). In a movie set in July and August of 2016—featuring clips of both the Republican and Democratic conventions of that year—the song is less a period marker than a timeless jam. It opens the film with a burst of familiar ardor before becoming an over-obvious musical theme for a story of return and departure, spite and pity.

In a montage of job interviews, Mikey (Simon Rex) has no problem explaining the gap in his employment. For the past twenty years, he has been an adult film actor in Los Angeles, and he couldn’t be more proud of his work. His homecoming to Texas City, TX, a Gulf Coast deepwater port, was out of necessity. He has arrived on the doorstep of his estranged wife and her mother bruised and bloody, with nowhere else to go, smoothing his hair and begging their sympathy. He has shed his Texas accent "for the biz," but retains his manic, boyish affect, which quickly becomes grating. Eventually, he resumes work in the informal economy, selling bunk weed to skaters, dancers, and hardhats.

Red Rocket plays out the next month of Mikey's life. He resumes conjugal relations with his wife (Bree Elrod), befriends a neighbor (Ethan Darbone) for the use of his car, becomes enamored with a local countergirl (Suzanna Son), and generally behaves as a manipulator and an agent of chaos, blithely blundering into and out of the lives of others.

Director Sean Baker's recent films are about walking people in driving places. Tangerine (2015) follows a sex worker around Los Angeles on the first day after a month-long prison bid. The Florida Project (2017), set among the permanent population of Orlando's roadside motels, is most notable for its discovery of Brooklynn Prince, the scene-stealing seven-year-old whom Baker treated as a one-girl Kids Say the Darndest Things marathon. Without such a singular talent in place, his latest sags mightily before deflating altogether.

That's not to blame the performers, most of whom are non-actors, who work valiantly through the given material but cannot overcome the thin premise and shopworn impressions of all-American poverty. Where Baker's previous films allowed their characters a certain amount of dignity in the face of dire circumstances, Red Rocket makes them clowns, mining the lives of the less fortunate only for the laughably absurd.

This is a film with almost as many good ideas as bad, to be sure. Baker wisely allows campaign season to play in the background; the family watches both conventions without comment. The scene is convincingly set, with affluent suburbs abutting the slums, oil refineries belching flames in the background, and smoke breaks scored by tests of the emergency warning siren. A case of stolen valor at the shopping mall offers an intriguing beat. But every moment of confrontation falls flat against the monolith of Mikey. By the finale, his large, limp penis seems to be the film's abiding interest.