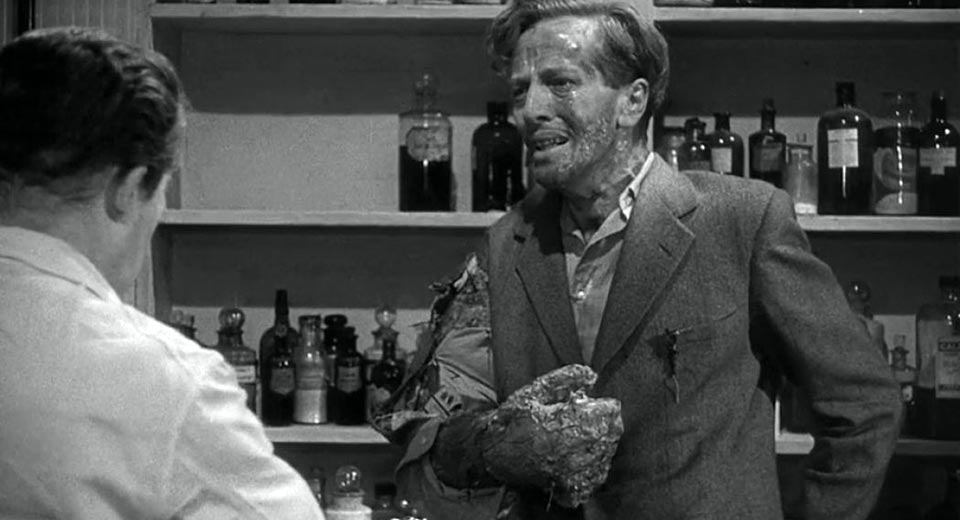 The Quatermass Xperiment opens with a couple of young lovers interrupted from their late night reveries by the crash of a rocket into an otherwise-empty field in the English countryside. Enter Dr. Quatermass, a gruff American scientist who insists on the "success" of the space-travel experiment, despite finding that only one severely traumatized, mysteriously ill astronaut and two empty suits are all that remains of the three-man crew. Carroon, the survivor, in a lastingly disturbing performance from character actor Richard Wordsworth, is a mute and barely living Frankenstein of a man-suit with skin that appears to have been stretched over swollen innards yet sunken deeply in on his distorted face, registering at turns a look of terror, a truly interstellar vacancy and, eventually, a murderous hunger.

While Quatermass and his colleagues attempt to find an explanation for what's happened to the ship, watching the footage of an on-board camera which captured, in a strange disintegration of the image and a precipitous drop in temperature, the invisible yet devastating encounter with the Creeping Unknown (as it was titled for its American release), Carroon escapes, leaving in his wake a number of bodies—human and, rather tragically, the entire population of the local zoo—seemingly sucked dry of their very life-force, and a number of rapidly-expanding kombucha-mother-like creatures. Quatermass realizes that a space parasite has slowly taken over Carroon and begun spawning on the streets of London, ever hungry for more human flesh; as he hunts down the intergalactic killer, has he learned the error of his ways, will he be able to resist the vast mystery of the cosmic unknown?

The Quatermass Xperiment is the first official "Hammer Horror," adapted by Hammer Film Productions from the BBC miniseries and surprisingly successful at the box office despite (or due to) its X rating from the British Board of Film Censors. While the majority of the violence itself is off screen, the pulsating, globular parasitic creatures and the gradual transformation of the host astronaut's body into a an unrecognizable, weeping mass with only a single, seeking and tragic eye to suggest its former humanity are truly gruesome, the typical limited Hammer budget here used to fantastic effect whose influence can be seen in later sci-fi-horror hybrids. And yet the film retains a degree of the Lovecraftian cosmicism of the BBC original, maintained throughout the Quatermass television and film treatments to come. Screening as part the Alamo's Frank Henenlotter retrospective in a sidebar of favorites selected by Henenlotter, it's a practical-effects landmark that must be experienced on the big screen.