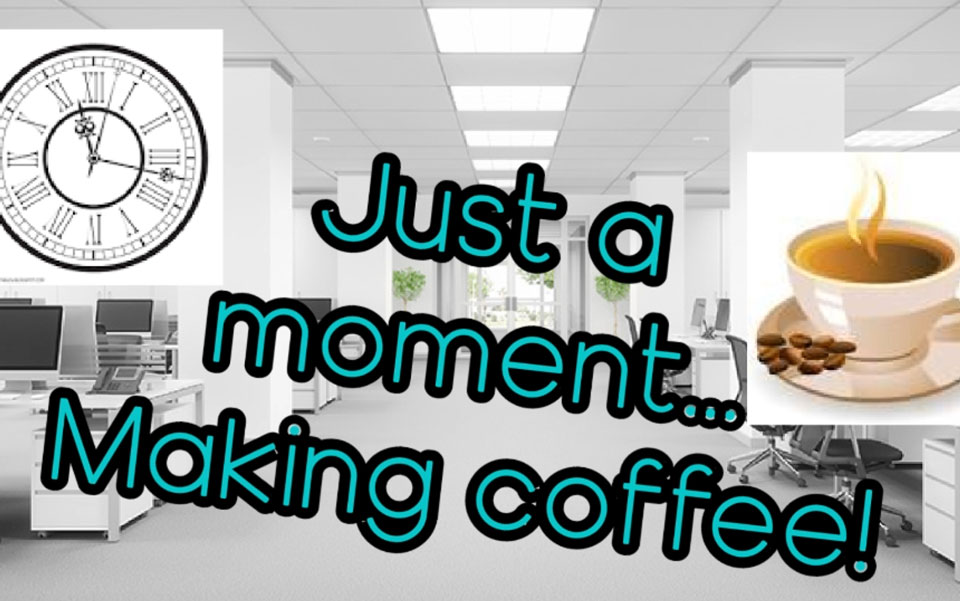 On a day indistinguishable from most, I was complaining about the office drudgery to a friend over Gchat. He offered advice that was an amusing way to overcome the corporate malaise, but it’s since evolved into something more practical as I work from home (WFH) Monday to Friday: just ‘play office,’ he said.

In late March, Derek, who you might know as @derek8185338005, or perhaps from his show Truthpoint with @dril on Adult Swim (credited as Derek Estevez-Olsen), started streaming what he dubbed Working From Home  on his Twitch channel. For a little over a week, he invited viewers via Twitter in the notoriously sluggish late afternoon hours to "join me in working from home. Relax and enjoy the comforting sounds of a fellow employee just working and being productive :-)".

The stream is, for all intents and purposes, a video conference with screen share. Multiple windows overlap, usually including some combination of a browser open to Fiverr (the Draconian freelance marketplace), MS Paint, a text document where Derek takes "minutes" from the "meeting," and a webcam capture of him blending into a stock image of an empty open office, which rotates slowly ad infinitum. A lull of office chatter, ringing telephones, and typing on a mechanical keyboard sometimes adds ambiance to the office “experience.” Some days a specific directive would be included in the invite, i.e. "today i will research alternative solution" and "hop on a call and pitch me some cool business ideas :)” — the objective a vague thing that may or may not materialize over the course of these hour-long meetings. But that's beside the point. By default, viewers are participants in the meeting, but taking things a step further, the live chat is also dubbed the “departmental Slack channel.” Sometimes Derek works these chats into the minutes, letting them dictate the course of the discussion. 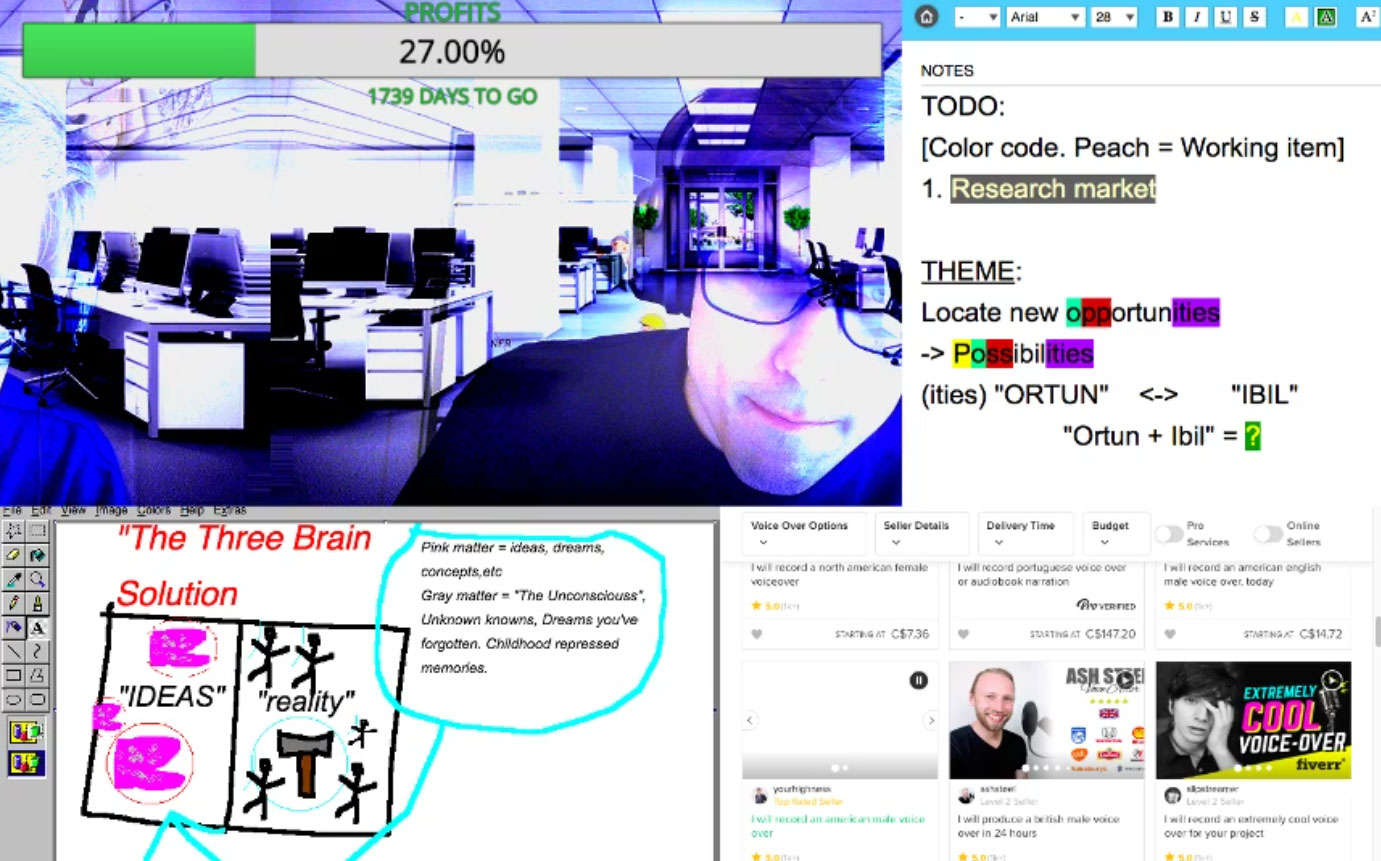 An absurd mashup of roleplay, improvisation, “Study With Me” videos, and white noise machine, this playful combination of performance art cloaked in the banal transcends satire. The attention to detail of this hellscape overflowing with corporate buzzwords creates a reality that is simultaneously hyper-specific yet completely generic. And yet this simulation not only fully encapsulates my current world, which revolves around pretending that life and work are business as usual, but expands it: my playing office is shared. It’s at once an ode to a way of living and working whose demise feels imminent, a semblance of what reality used to be, but also takes a highlighter to the alienation one can experience in an office environment.

Whether for a distraction or something else, the participants played along in the chat ("I need that on my desk by Monday," one user quipped). Reality is further blurred when Derek shares a link to a video call and viewers can actually join live. "I'm interested in hearing new business ideas." On the video calls, at some point the awkwardness of this undertaking seems to be surpassed and the adage of "no idea is a bad idea" is taken to its ludicrous extreme. I challenge you to say with certainty that you haven't heard some version of these in a meeting:

"Part of my own workflow is delegation"

I put the meeting on in the background and can finally focus on my actual work. Business as usual. Let's circle back in a week. I just wanted to follow up per my last email. I'll check in with you in our stand-up tomorrow morning. Now we were all playing office. A reliable blanket to cover our heads, but maybe, more than anything, an appropriate, literal nod at the absurdity of partaking in an office roleplay during a pandemic — not on Twitch, but in the daily grind.

One of the recurring images in all of Derek's WFH videos is his face superimposed over a still of an open office, rotating, his face sometimes appearing twice in the same frame as it splits at the edges. It reminded me of Michael Snow's *Corpus Callosum from 2002. The title refers to the part of the brain that is thought to pass messages between the two halves, while the film itself is interested in dualities, manipulating images and presenting the completely commonplace with the completely far-out. In one of its main scenes Snow returns to over and over, a camera moves cyclically through an office, which changes slightly with each return. Bodies glitch, objects warp, opposites exist together and interact with each other (“was this scene always like this,” you might ask yourself). Periodically, directions are said somewhere off camera, though the breaking of this staged illusion is indiscernible in the sound mix, fitting believably into a world where much could be happening where we do not see. The corporeal shapes and movements of the office workers warp, sometimes literally, without much disturbance to anyone. 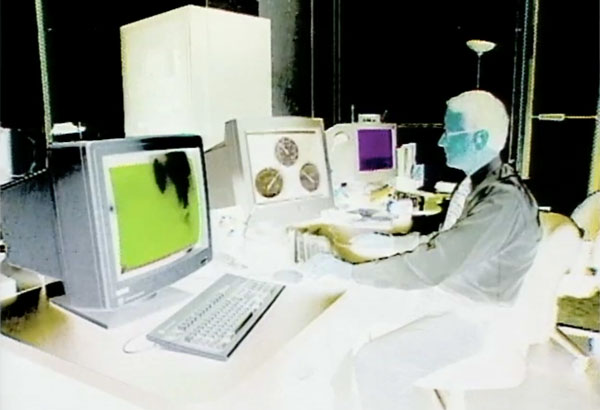 These inconsistencies existing in the same space are both hilarious and creepy, a line I think many of us are toeing these days, particularly those lucky to work virtually. Derek’s WFH stream is also a shapeshifter: minor details changing slightly with each broadcast (was this scene always like this, you might ask yourself), but the “minutes” are consistent throughout, picking up from the last session, something to ground you within the simulation.

Despite different intentions and styles, both works confront you with the notion that reality is not any more sensible or stable than these comically spine-chilling bizarro worlds — a strange relief when everyone else is pretending otherwise. Whereas *Corpus Callosum uses visual manipulation to juxtapose monotony with the unexplainable, such pretense is less obvious in Derek’s WFH show, in which you can be a daily participant. You are not just a passive viewer, you are a contributor by virtue of opening the stream. Whether lurking, chatting, or hopping onto the video conference, it’s a team effort of feathering the boundaries of the real.

A lot has been written about escapism through various media, and escapism into the humdrum is not a novel or new venture. Why play a game where you need to get a job and wash the dishes and repair the toilet every other day, à la The Sims? Is it for the same reasons as taking part in an office simulation — familiar, yet with no lingering consequences? Dissociating into worlds where you can literally negotiate with the Grim Reaper or alternatively abide by no gods or masters, even if you’re playing office, sounds nice. I’ll save that for my weekends, but in the meantime I know how to survive the 9-to-5.