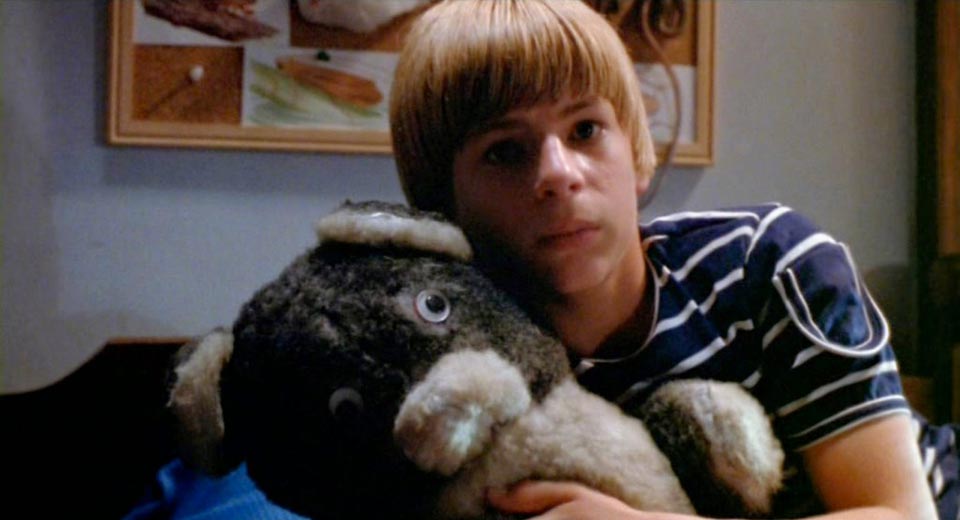 The Pit (1981) manages to sustain a profound feeling of unease while barely making sense. The film centers around 8-going-on-18-year-old Jamie, a burgeoning creep whose hobbies include bike appreciation, sexual blackmail, and long walks in the woods. It's during the latter he discovers the title pit, filled with what Jamie calls "tra-la-logs," squat, hairy creatures with glowing eyes.

Jamie's parents skip town to find a new spot to move where their son's weirdo rep won't precede him, and leave Jamie in the hands of college-age babysitter Sandy. Like a psychosexual Calvin and Hobbes, Jamie schemes with his stuffed teddy bear and only friend Teddy (who may or may not be alive; the movie shrugs at such formalities as logic) on how to get Sandy to love him. When Jamie runs out of money to feed the tra-la-logs, Teddy hatches a plan that'll solve the problem and take care of Jamie's bullies in one fell swoop. And maybe if Jamie lets Sandy in on the secret, she'll like him more...

The queasy power at the heart of this sui generis oddity comes from the conflicting goals of Canadian screenwriter Ian A. Stuart, who set out to make a serious glimpse into the mind of a disturbed child, and American director Lew Lehman, who tried to cram as much lecherous ogling as possible in the film's runtime, resulting in tonal whiplash between a made-for-tv movie set in Everytown USA and the sleaze level of a typical 80s slasher, all set to disturbingly jaunty music inappropriate for either.

Ironically Lehman's wife refused to let him actually shoot any of his beloved T&A, save for a nude scene involving their own daughter. The remove echoed his overall lack of experience with horror – The Pit was his first and last feature, and before that his sole experience was as one of three writers on the late-period John Huston flick Phobia.

His main qualification for directing seemed to be "living in Wisconsin," as The Pit was shot almost entirely in Beaver Dam, but despite bravado outpacing his talent, this oddball Wisconsin-Canadian co-production managed to surpass most exploitation films at their own game. Screening as part of Alamo Drafthouse's weekly Terror Tuesday, the film's intentional scares are laughable, but its inadvertent psychological grime will linger in viewers' heads long after watching.