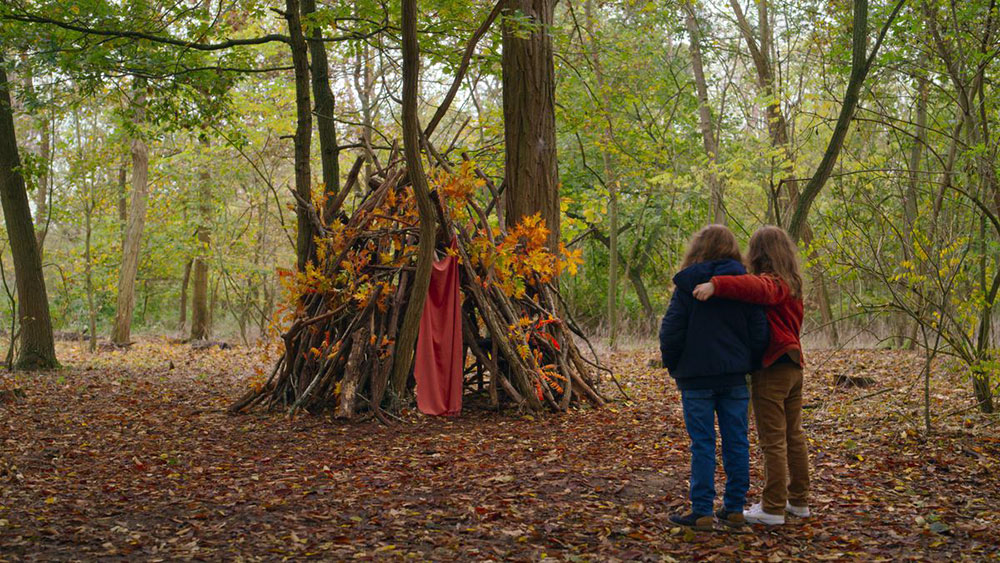 Director Céline Sciamma follows the costume drama Portrait of a Lady on Fire (2019) with a different kind of period piece, where temporal specifics matter less than tangible connections. Petite Maman (2021) is a spare, sweet tale realigning a mother-daughter relationship by overlapping a few vital days of their childhoods. To call its time-spanning premise magical realism would suggest a twee wonderment that’s absent from the film; Petite Maman centers on the desperate childhood need to understand at an age when one has no real control of the world around them.

After her mother’s death, Marion (Nina Meurisse), her husband (Stéphanne Varupenne), and their daughter Nelly (Josephine Sanz) head to Marion’s childhood home to pack it up. Marion, upset, disappears, leaving Nelly with her father. While he busies himself cleaning, Nelly explores the woods, finding her mother’s childhood tree hut, and her mother, aged eight (Gabrielle Sanz), building it. Time travel is the convenient device, resynchronizing a mother-daughter relationship to that of peers, but as Sciamma said in a recent interview, “film is the time-traveling machine”—not just in the sense of playback, but in the medium’s unique ability to alter temporal perception.

Films like Je t’aime, Je t’aime (1968) and La Jetee (1962) hinge on moments so emotionally dense they’re mental black holes, drawing their protagonists back and inexorably in. For Nelly and Marion, the tree hut is a physical touchstone. Nelly asks her father if he remembers her mother talking about the hut; to an eight-year-old, memory is reality, even if it’s not her own. When he says no, she replies with satisfaction, “You didn’t really forget, you just didn’t listen to her.” She did, and so accesses the hut, along with her eight-year-old mother. Half the film’s joy is in the simultaneous confidence and clumsiness of their movements: the girls pouring milk with both hands, or building a fort with stubby fingers. They’re not acting (except when play-acting), but being.

Marion and Nelly are played by twin sisters, their nearly identical appearances suggesting a generational echo that continues through the temporal ambiguity of costume and set—“mid-century modern,” as used to describe 1940s–1970s design. Nelly’s name, taken from her great-grandmother, brings a smile to her grandmother’s lips: “I haven’t said that name in a while,” she says, hinting at larger cycles of silence and distance. Later, with a simple exchange of names, Nelly acknowledges her mother as a person.

The film’s svelteness, intimacy, and isolation don’t feel like the result of Covid-19 production restrictions (though they were a factor) but deliberate choices emphasizing the emotional space between characters. The moment is eternally fall, summoning a sense of loss and change with heavy audio emphasis on leaves rustling, breath, scrapes of shaving, cereal crunching. Petite Maman rests quietly in the present even as it straddles two eras years apart.