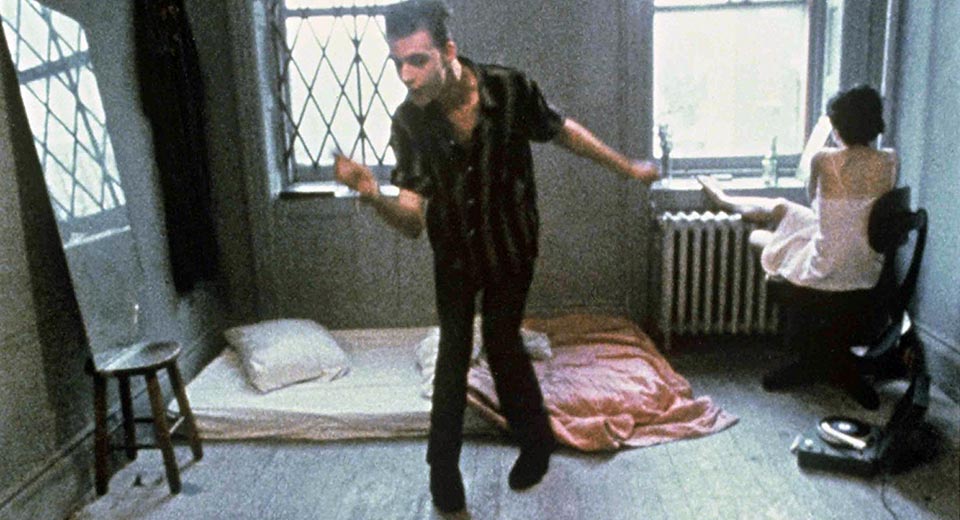 More than any other American filmmaker, Jim Jarmusch embodies Cesare Zavattini’s description of postwar Neorealism as an “art of encounters.” His films are heroically inefficient records of characters floating between absurd, moving, unsettling, hilarious and, above all, fleeting collisions with fellow travelers along society’s margins. Plumbing the vacancy at the core of American culture, he casts us all as aliens, permanent foreigners bound by a weak gravity. This liberating detachment fosters a spare cosmopolitanism in which jazz and Italian westerns—American art radiating abroad before echoing back—form a scrim behind Jarmusch’s ennobled naifs and their search for… something to search for.

The good shepherds at the Criterion Collection recently tucked away Jarmusch’s 1980 debut, Permanent Vacation, playing tonight at Anthology Film Archives, as a supplemental feature on their disc for his more celebrated sophomore feature, Stranger Than Paradise (1984). To their credit, they enlisted Jarmusch to supervise a remaster of the 16mm film, but market concerns aside, Vacation has more to offer than repolished marginalia. With this $12,000 effort, Jarmusch arrived as an artist fully-formed.

Cartoon-voiced Chris Parker plays Aloyius “Allie” Parker, a greaser-tramp drifting from “here to here,” where he encounters a host of rambling weirdos ensconced in mental institutions, fire escapes and arthouses. Jarmusch opens the film with repeated juxtapositions of busy Manhattan thoroughfares and the vacant alleyways nearby. Empty space expands within his static compositions, becoming available space for Allie and his compatriots to slowly collide. He’s nearly all pretense, a would-be jazzman without an instrument, who occasionally inhabits a note of grace, like claiming to his girlfriend that “it’s better to think you’re not alone when you’re drifting, even though you are... instead of just knowing you’re alone all the time” when you’re situated. He characteristically undermines his profundity moments later with self-aggrandizing twaddle about the “recklessness” and societal disregard for his chosen path. Wary of his tired beatnik schtick, we nonetheless root for him to persist, hoping that someone, even someone so often ridiculous, can sustain an existence above the grind.