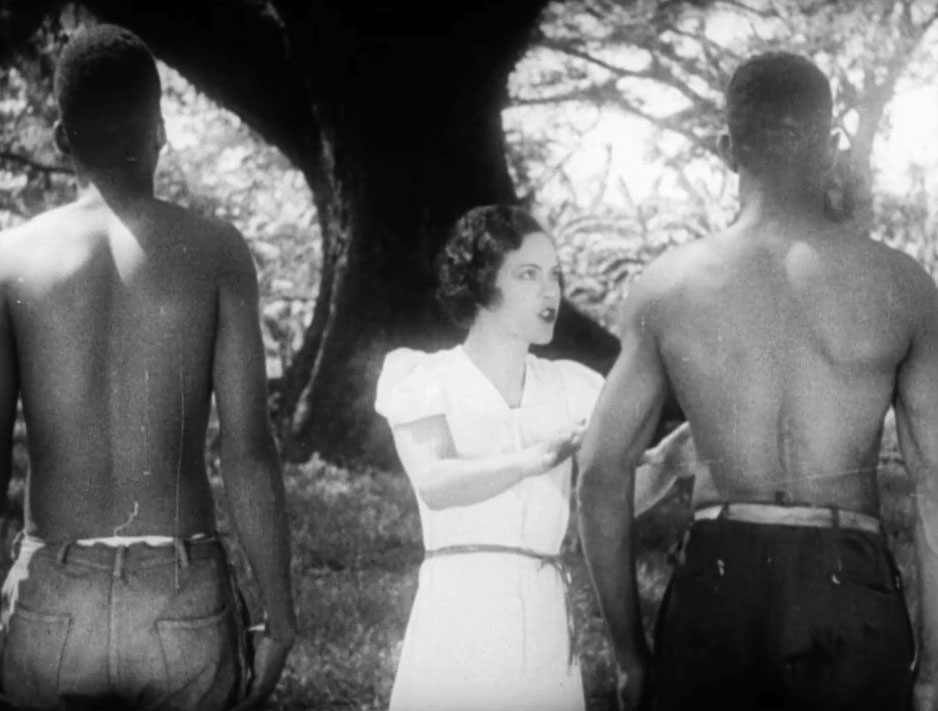 When describing the queer appeal of Ouanga (1935), scholar Ellen C. Scott aptly situated it as a horror film that makes “whiteness strange.” And how strange whiteness is in this early zombie film about a spurned (extremely) light-skinned Black voodoo priestess, Klili Gordon (the indomitable Fredi Washington), who takes vengeance on her white former lover, Adam Maynard (Philip Brandon), and his new white bride, Eve Langley (Marie Paxton), through the power to raise the dead.

Written and directed by George Terwilliger, Ouanga, also known as The Love Wanga, or The Drums in the Night, is only the second U.S.-produced film following White Zombie (1932) to feature the zombie creature. With a thinly layered plot and even thinner dialogue, Ouanga failed to secure a theatrical release in the United States, not because it was bad, which it certainly is, but because of its salacious plot of implied and onscreen interracial romance that triggered Hollywood’s anti-miscegenation censors.

Make no mistake, Ouanga functions as a cinematic parable of the terrors of miscegenation. Klili, though, is not your average tragic mulatress. Washington’s scorned priestess demonstrates a righteous anger toward white people, differing remarkably from her portrayal of Peola Johnson in John M. Stahl’s Imitation of Life (1934), in which she found only shame in her mixed-race identity. Through Washington’s manic use of melodrama and impeccable onscreen fashion sense, Klili is not only our protagonist but a heroine who gains our sympathy against the white people who had done her wrong.

Ouanga’s limited delivery of the walking dead leaves much to be desired but reveals how early zombies were racialized and coded as the enslaved across Black diasporic folklore. In fact, Victor Halperin’s White Zombie bears the modifier of “white” to distinguish the tale about the zombie disease uncommonly affecting a white person. This is a far cry from the decaying, brain-eating corpses that populate many of the contemporary cinematic and televisual portrayals.

The zombie was birthed out of the plantations of the Caribbean, specifically Haiti. Culturally, it came to represent the effects of imperialist, white supremacist, patriarchal capitalism’s power to dehumanize the Black body. In Haiti, there were accounts of the walking dead, individuals who were likely poisoned and declared dead only to rise from their graves and haunt their former communities. In her collection of oral histories from the Caribbean, Tell My Horse (1938), Zora Neale Hurston recounts such a tale of Felicia Felix-Mentor, a woman who legally died in 1907, was buried, and yet still roamed Haiti without speech twenty-nine years later.

In Ouanga, the dead rise to do Klili’s bidding, retrieving Eve for a sacrifice. These zombies are silent, lacking any characteristic traits, and critically, are susceptible to the cracking of the whip. Although race is constantly named throughout the film (largely through the rival voodoo priest Lestrange who is played by the white Sheldon Leonard), colonialism is not. It is only through the opening ethnographic newsreel-esque footage of the island, alongside a frightening scene in which Adam wields a whip against the zombies, that Ouanga reveals what the underlying thematic its narrative is reticent to engage with explicitly: the cosmic, cataclysmic terror of plantation slavery and its afterlife across the Americas. This terror is embodied in the performances of Washington and the supporting Black cast who restore agency, albeit limited, to their onscreen portrayals of Black people and culture in the film.

Originally scheduled to be shot in Haiti, the production was moved to Jamaica after several Haitian male voodoo priests, papaloi, protested the film and cursed the crew. The American producers, mostly British cast, and entirely Canadian crew were out of their depths when it came to ensuring fidelity to voodoo culture, leaving the performers of color to their own devices. While I am certain the incantations and spells are largely inaccurate, there is a dynamism to how they are presented in Ouanga, with the Black cast conjuring meaning through rigorous drumming, dancing, and chanting. Following Katherine Dunham’s anthropological field notes compiled for her 1938 master’s thesis, The Dances of Haiti, Ouanga demonstrates that something powerful emerges when Black folk come together in fellowship.

While Ouanga has a sadly predictable ending, every frame up until the 53 minute mark (out of its 56-minute running time) demonstrates that white culture is the real menace to society. With Klili as our heroine, Ouanga becomes an unintended horror film about the violence and mediocracy of whiteness—rather the spectacle of Black culture as horror it was intended to be.

Ouanga screens August 20 and 28 at the Museum of the Moving Image on 35mm as part of the series “White Zombies: Nightmares of Empire,” running August 19-September 11.