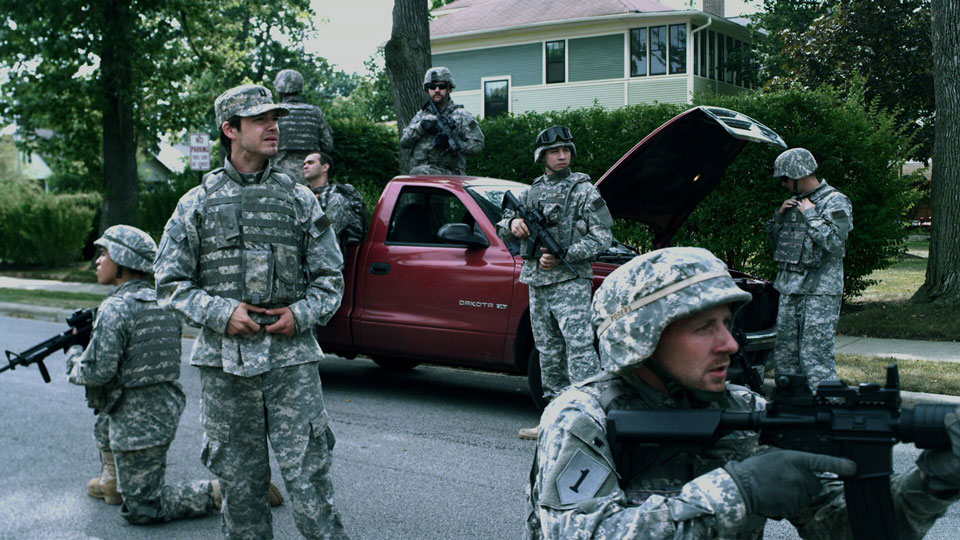 In 2017, directors Eric Marsh and Andrew Stasiulis released Orders, a no-budget hallucinatory collision between suburban banality and imperialist war. Dana Reinoos covered the film’s New York premiere for Screen Slate in 2018. Two years later, federal troops in unmarked vehicles are abducting Americans on American streets, making this a fitting time to speak with the directors, whose film, conceived during the first Obama administration, has only gained relevance in the subsequent years.

In mid-August, Screen Slate’s Patrick Dahl spoke with Marsh and Stasiulis about developing a surreal narrative inspired by thinking about the War on Terror, shooting on-the-fly with a shoestring budget, and capturing the textures of the suburbs in acute detail — including curiously omnipresent watermelons.

Patrick Dahl: Conceptually, I think the movie has a really great elevator pitch: U.S. soldiers, adrift in the suburbs, fighting an imaginary war. Did you develop the concept while considering the local resources you would have to work with?

Andrew Stasiulis: It took us years from the writing to the shooting to the editing. I first sat down to write a faithful adaptation of Alain Robbe-Grillet’s In the Labyrinth. And then I started looking into rights and what it means to do an adaptation and to be broke, and then I was kinda like, “Fuck that.” At the time I was working on my Master’s in Edinburgh, studying War and Media and the War on Terror. So that was my life for a year, reading about the militarization of our perception.

Then I came back [to the United States] and started scribbling a bunch of shit and writing these almost stream-of-consciousness notes, and eventually I brought it to Eric and said “Help... Can we do this?”

Eric Marsh: It was just a word document, but Andy doesn’t give himself enough credit. It was this surrealistic scrawl, but it had this kind of structure to it, even if it was not in screenplay form. It was like his mind was splattered into this Google Doc, but I loved it.

AS: Practically speaking, we launched into making this thing in an untraditional way. We just started. We didn’t have a budget. We didn’t have costs figured out ahead of time. We really just said, “Let’s start shooting, and hopefully we’ll be able to keep shooting, and then one day this thing will be done.” And that was it. We would budget for a shoot at a time. “Alright, we’re gonna shoot XYZ this weekend, so what do we need?” And then we would get what we needed just for that weekend. We did do a couple of fundraisers. And our friends and families were very generous in helping us out. But it was largely funded on the fly. It was entirely fueled by our energy and the energy of the cast and the energy of the crew. People were donating their time. Nobody got paid on the movie.

PD: Do you have a sense of what the ultimate costs were?

AS: We’ve tried to come up with that number a couple of times.

EM: I think we’ve settled on saying 15k, give or take who knows. We didn’t, strictly speaking, keep all records on that.

AS: We tell people and their eyes bug out and they say, “You did that for that?”

EM: I’d say if we had to rent gear it would have been $100k, easy. Andy was teaching and I was in grad school at the time we were making the movie, so we had access to the DePaul University’s equipment. We used the Red One, which was already reviled by everyone on Earth, so everyone was renting the newer cameras and no one wanted to check out the Red One. So that was our tank for the whole movie, this unloved Red One that no one wanted. And we were like, “Hey, if it’s good enough for Soderbergh...”

AS: Yeah, we sat Scott down and said, “Your character’s name is ‘the Man,’ and his wife is ‘the woman’, and their son is ‘boy.’” And it wasn’t until the very end of the shoot that Scott came up to me and said, “Hey, I never told you this, but I developed my character. Do you wanna know?” And he told me this 40-minute story out of a totally different movie. But that’s the beauty of it, that’s what we set out to do, to create a sort of open text.

EM: At the very beginning, when Andy pitched it to me we had The Discussion. I said, “Alright, what’s the deal with this soldier?” And he was like, “No deal.”

EM: He said, “No psychology, no story.” I always think of a Claire Denis line where she said, “A filmmaker should always be fighting against something.” And that could literally be anything, the weather, your producer, yourself. Andy and I both were both very galvanized by that mindset. So there was a lot of general stuff in terms of what we were wanting to confront. Not just the War on Terror, but the way war is represented in movies. And also making a movie without an army. We were energized by the thought of guerrilla filmmaking, of small filmmaking, of group filmmaking.

For us it was like a crusade for everything we believed in, in terms of the problematic history of war movies, which are tied up in money and power and the ability to use the machinery and get your script approved by the military. The war film has historically been the domain of Hollywood and big budget types of projects. We had to prove that we could make a war film with no money and we could make it relevant and meaningful. There was a vision. And it was driven by the spirit of “Fuck war movies. Fuck the War on Terror. Fuck everything. Fuck a hundred-person crew.” That kind of mentality drove us all the way home. 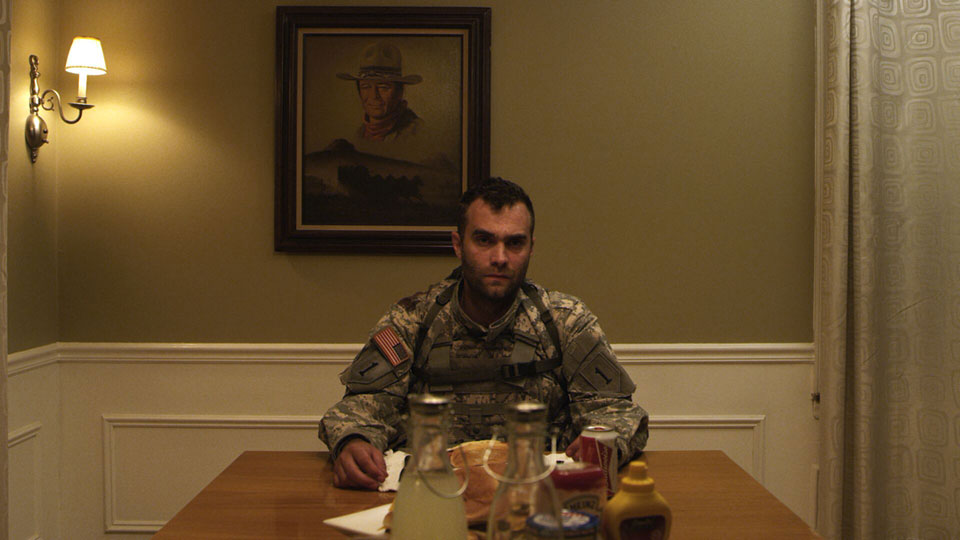 PD: There have been a million movies about the suburbs, and I’m not sure I’ve ever seen a movie that gets the textures so right.

AS: A lot of that speaks to things that were important to us from the get-go, such as resisting the hyper-reality of movies in the Baudrillard sense. Godard would always say that in Hollywood it takes them ten hours to do something he can do in ten minutes. In Orders we pulled as much out of the space as we could. We weren’t putting things into a lot of spaces. Our set dressing was taking things down, hiding things and removing things from this world. In that void people are able to bring things with them. The thrill of this movie is talking to people and hearing the things that they brought to it. And then afterward the things that they leave and the things that they altered.

EM: One of the things that’s interesting now is how my own relationship to the movie has changed in terms of things that have happened in real life. Andy brought me this story in 2011. I read it and thought it was provocative. Soldiers in the American suburbs! Soldiers on American Streets! It’s not like we invented the concept of soldiers in the streets, but Americans have a unique relationship to war. It’s mostly abstracted and mediated. We started out thinking it would be awesome for Americans to confront the idea of soldiers in their streets, and then the next thing you know, there are soldiers on American streets. So it’s evolving to this day in terms of what the War on Terror unleashed around the world.

PD: I have to ask about the watermelons. It’s the singularly perfect object for this movie. How did they find such a prominent place in the movie?

EM: They were always there.

PD: So that was in Andrew’s early writing?

EM: Yeah, from the very beginning. If the script was anything, it was these surrealist sketches of Americana. But everyone always asks us about the watermelons. That’s the question we get asked most often.

AS: One of the few festivals to show it was Kaunas International Film Festival. So during the question and answer period this guy gets up and asks this long question in Lithuanian and the translator turns to me and says, “He wants to know about the watermelons.” I was super ignorant and tried explaining, and asked the translator if they have watermelons there and she was like, “Pshhh we know what a fucking watermelon is. What’s it in the movie for?”

EM: Once we got into making the movie and we got comfortable with the concept, we were basically picking up watermelons for every shoot. We were picking them up out of habit.

AS: It’s this ubiquitous thing that’s drenched in Americana. Barbecues, summer. If you buy disposable tablecloths they’ll probably have little watermelons on them. The film was truly a collaboration, and we’d all end up with little in-jokes like, “Should we throw in a watermelon in there too?” “Why not?” “Sure, let’s do it.” There weren’t many situations where we said no to people. Whether it was an actor or someone on the camera, they came to us with ideas. The way we pitched working on it was that we wanted to create an adventure. We wanted to go on a journey. And it was a much longer journey than we thought. But the people who saw it through from start to finish, they’re like family now. Everybody just got it.

Orders is available to stream on NoBudge. 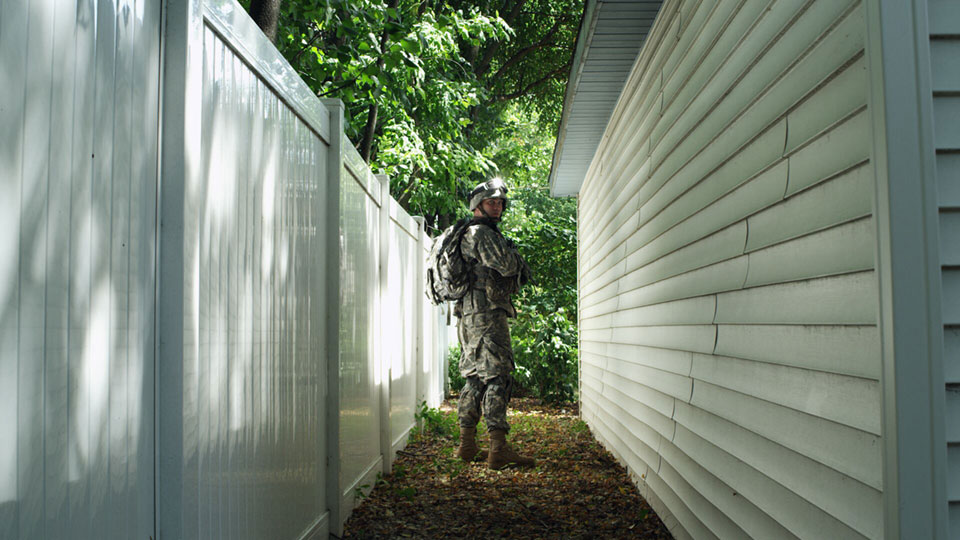