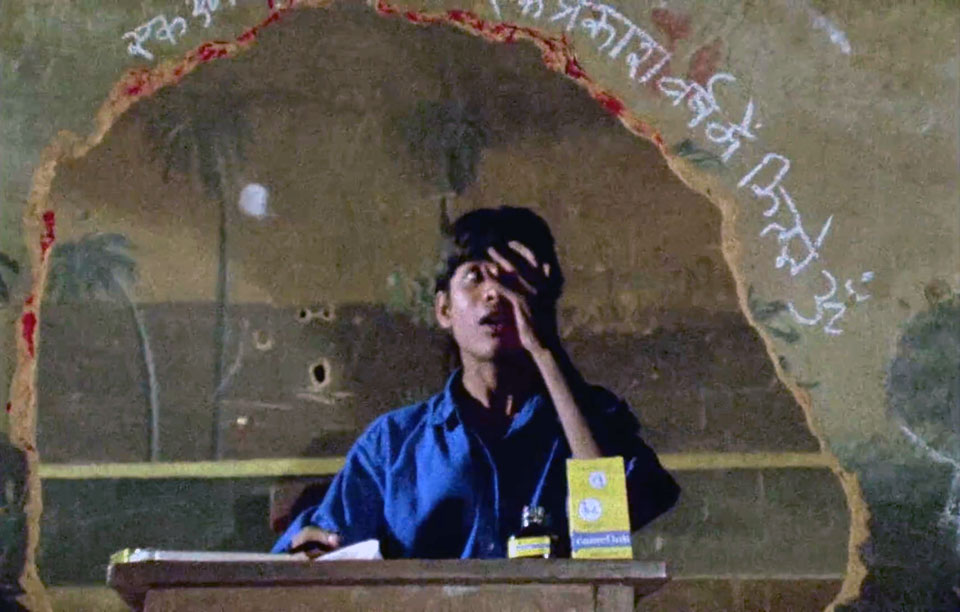 Considered an idiosyncratic anomaly during its festival run in 1988 and an established masterpiece of Indian parallel cinema when it finally released commercially in India in 2014, Kamal Swaroop’s Om Dar-B-Dar is no longer a secret. I first came across the title through obscure forums and watched it about a decade ago through a terrible digital transfer. Luckily for today’s audiences, the movie is now available in a restoration on MUBI as part of their Indian Cinema retrospective.

Om Dar-B-Dar begins with a cacophony of trumpets playing random tunes out of sync and jumping time signatures and scales. Then we see footage of 1922 British Raj with narration by the titular Om telling us about the mandated reorganization of caste-designation that left his fake-Brahmin family members “drifting like ghosts.” Then, a woman named Gayatri mentions how she came through the organs of a cow. If this bizarre sequence leaves you reeling, be prepared for one and half more hours of the same with no breathing room. Suffice to say, Swaroop’s approach with Om Dar-B-Dar – throwing a delirious mix of references, histories, and personal peculiarities onto the screen – makes it a unique and dreamlike avant-garde film that feels like a Bollywood movie but behaves like something totally alien.

This is not to say that Om Dar-B-Dar is pure nonsense. It is a movie of playful experimentation and an instinctive understanding of image and sound. A great sequence that captures the movie’s radical tonal shifts and fluctuations of pacing occurs in a large downtown gathering. A group of men dance to a fake Hindi song with nonsense lyrics. The music and street sounds all collide, creating a disorienting effect. The camera in the dance circle bobs and weaves around in a frenzy. Then, one of the film’s central characters, Jagdish, pursues Gayatri. He approaches her from behind and the film shifts to a fluid slow-motion shot, then a close-up of him pulling strands of her hair, then a jump-cut to him having already run about ten yards away from her in the opposite direction. Finally a montage of close-ups of Jagdish’s wrist being held by another man, his palm slowly opening up, and a man placing the strands of hair in his shirt pocket. Jagdish’s voice-over simply says “I am sorry.”

Indian Express, Swaroop acknowledges the inspiration of foreign artists such as Godard, Warhol, Buñuel, and Man Ray, along with his “teachers,” the giants of India’s Parallel cinema movement Mani Kaul and Kumar Shahani. The results are a radical combination of surrealist montage and formalist camerawork and editing – like the montage of Jagdish being caught with the lock of hair that turns the movie into not only an experimentation of form but of concept. His screenwriter Kuku’s approach is also singular, littering his dialogue with non-sequiturs and jocular double-entendres that jump between Hindi and English – a favorite of mine is the repeated phrase “frog keychain,” which when said in Hindi can be understood also as frog ki chaeen, meaning “the frog’s love.” Peerless in its vision and esoteric in its details, Om Dar-B-Dar is a movie that can hold true to the moniker of being “unlike anything you’ve ever seen.”