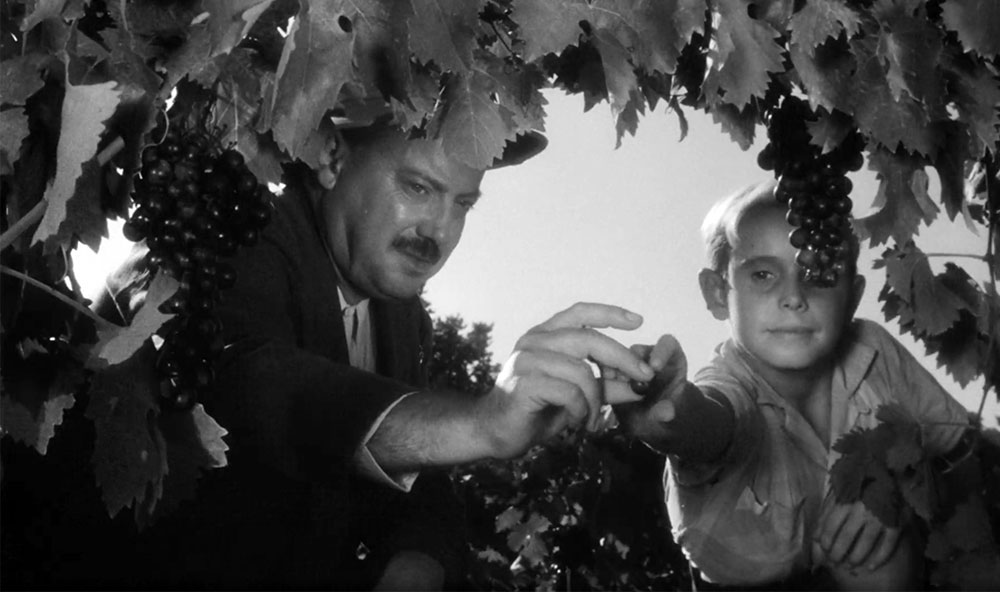 The Olive Trees of Justice (1962), American documentarian James Blue’s only narrative feature, tells the story of Jean, a young Pied-Noir (Algerian-born French national) returning to Algeria from France to visit his dying father. The Algerian War (1954–1962) is nearing its conclusion, and the worrisome prospect of independence occupies the thoughts and conversations of French settlers. The war curiously exists more in words than in events here: scenes of the marketplaces and cafés of Algiers are bustling yet calm, and the closest thing to conflict that arises is a swiftly deactivated bomb on a street corner. There is a bit of gunfire in the distance one night, but in general the war goes unseen, waged peripherally.

Olive Trees is based on the novel of the same name by Jean Pélégri, who here plays Jean’s ailing father. It is famously the only French film made in Algeria during the war, shot in Algiers and the Mitidja plains. Its production team was almost exclusively Algerian, as were many of its non-professional actors. When it was released, Olive Trees was met with mixed reviews—critiqued on both sides of the political spectrum for its perceived ambivalence on the issue of colonialism. Some on the left saw it as a vector for colonial nostalgia, while some conservative critics had hoped for a more definitively positive portrayal of French Algeria. The expectation of a clearer political stance is understandable, but its apparent ambivalence may be what makes Olive Trees so compelling. It invites a more nuanced evaluation of Jean’s psychology as a Pied-Noir considering his home through the eyes of an expatriate.

Jean’s return conjures nostalgic memories of his youth spent among the vineyards of his father’s farm. As he wanders the streets of Algiers doing errands and paying visits, the film alternates between scenes of a bucolic childhood spent cycling and playing with Algerian friends and his navigation of a more contentious wartime present. Yet as the film unfolds, the harmonious veneer of Jean’s childhood flashbacks—and his romantic image of his father as a gentle pioneer ‘rescuing’ the land—are progressively undermined by the visions themselves. The colonial power relations that structure the apparent social equilibrium of the vineyard are set into relief by Jean’s interactions with Algerian children and a local marabout, his father’s violent treatment of Algerian vine pickers and work seekers, and the explicit racism of Louise, a family friend and farmer.

After the signing of the Evian Accords ended the war in March 1962 (a little over three months after Olive Trees came out), nearly 800,000 Pied-Noirs repatriated to France (but not without sabotaging quite a bit of infrastructure on their way out). Jean, after attending his father’s funeral, decides not to return to France, but to stay in Algeria, ‘his country.’ One wonders how the ending might have changed had filming been delayed only a few months.

The Olive Trees of Justice screens this weekend, January 21–27 at Metrograph.