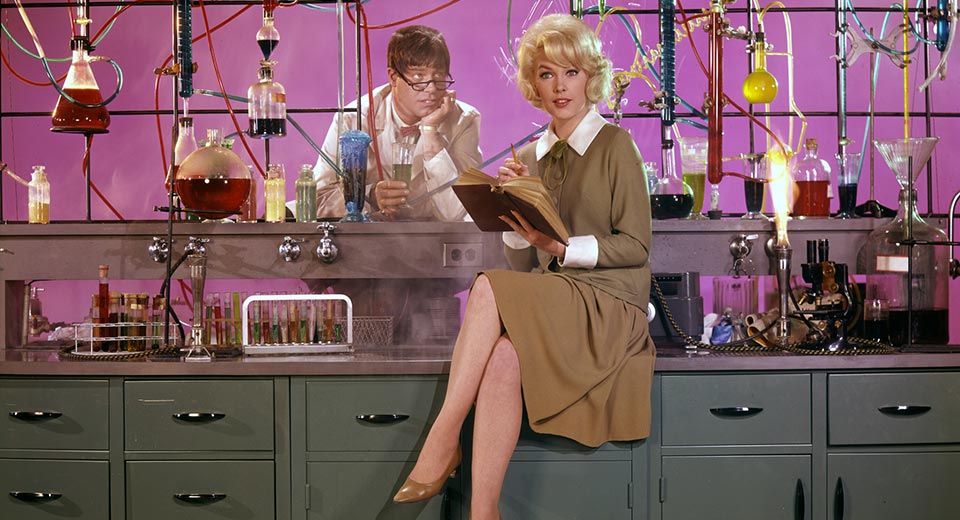 Comedian/macher/curmudgeon Jerry Lewis's film career officially began, along with partner Dean Martin, in George Marshall's 1949 comedy My Friend Irma. The film, based on a wildly popular radio show, gave audiences their first eyeful of Martin and Lewis: as a suave crooner and his wacky pall, respectively. A little more than a decade later, Lewis took control of his histrionic on-screen avatar with The Bellboy, and his technical acumen was revealed in earnest. Luckily for us, Lewis' madcap fourth feature, The Nutty Professor, screens tonight at MoMA.

Like many an Ugly American, I once lived in hellish ignorance, convinced that Lewis was nothing but a bug-eyed manchild unduly beloved by the French. Perhaps you share my long-disregarded sentiment; if so, the proceeding pablum is unlikely to move your needle. If, however, you've always suspected that The Strange Case of Dr. Jekyll and Mr. Hyde could do with a few double takes and a musical interlude, there may be hope for you yet.

Robert Lewis Stevenson's masculine Madonna/Whore allegory has been catnip for master thespians since the reign of Queen Victoria—cobble stone-sweeping capes, doomed whores in back-alleys, and the hero's handsome visage, corrupted into a Kabuki mask of capital-T Turmoil! Iconic, sure, but this is 1963, baby! With a strapping young Catholic in the White House and rock 'n roll on the radio, it was only a matter of time before Stevenson's London fog would get the Technicolor treatment from an actual human cartoon.

Enter ur-dork Julius Kelp: bumbling chemistry professor at Generic U, held hostage by bullying jocks and bureaucratic hand-wringing. Night after night, Kelp returns to his basement lab for a little solo experimentation, goaded on by a mouthy Mina bird. You don't need to be a Viennese headshrinker to clock the sinister inclinations bubbling just beneath that virginal white lab coat!

Who can blame the guy for cooking up a wonder elixir that transforms him into an over-the-top hepcat? Liberated by his concoction, our titular Professor roams the campus as Buddy Love—tellingly, Lewis in Dean Martin drag—and begins his double-life as Upstanding Young Man by day, cutie-crushing Don Juan by night.

Will Julius Kelp's meddling spell certain doom? Will Buddy Love ever learn to respect women and bartenders? Is there a lesson to be learned here—maybe one about how it's ok to let your freak flag fly? Only one way to find out—after all, fifty million Frenchmen can't be wrong!