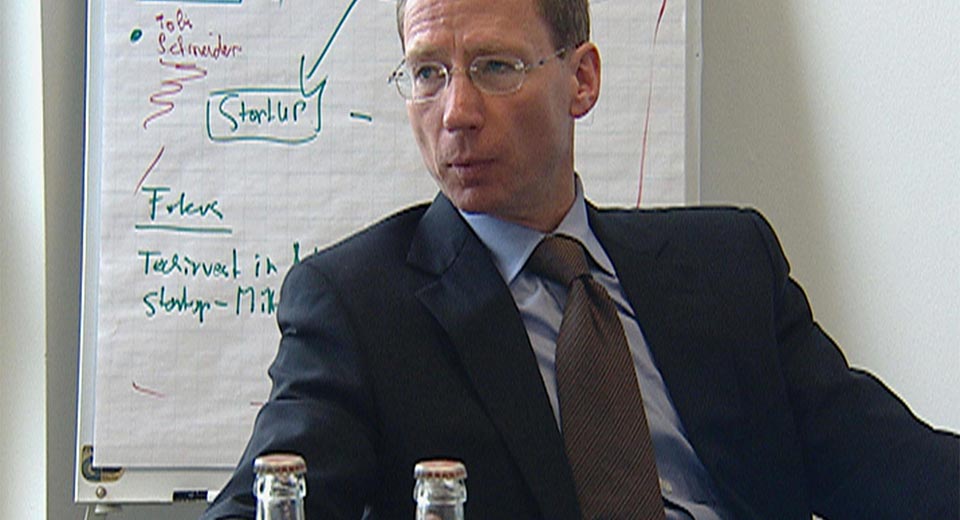 Tonight the Film Society of Lincoln Center screens Harun Farocki's short documentary Nothing Ventured (2004) as part of its Christian Petzold series, including both a retrospective and selected influences of the Berlin School filmmaker. The film records two days of exceedingly dry negotiations between representatives of two German companies. NCTE makes an invisible magnetic coating that tests torque in construction equipment and automobiles. AT the outset, Farocki provides a comically crude animation that almost clarifies how this works. Buchanan Industrial Technologies is a venture capital firm offering to loan NCTE a large sum in exchange for 40% of its business. NCTE is insulted by the conditions and counters. Buchanan cites risk and offers slightly less onerous terms. The process continues. They take a lot of breaks.

The mind-numbing banality on display becomes perversely fascinating as Farocki's camera steadfastly captures the blank expressions and awkward pauses occupying a small conference room. Farocki's intrusions are minor, but work to heighten the absurdity of the situation. For instance, he cuts several times to a promotional image from Buchanan, wherein white lines divide nonthreatening shades of pale blue and a graphic shows a fish leaping out of its bowl. This bit of self-identification only underscores the soullessness of corporate aesthetics and the hollowness of their purpose. Meanwhile, the true face of late capitalism sits in the conference room and debates valuations over soda and cookies.