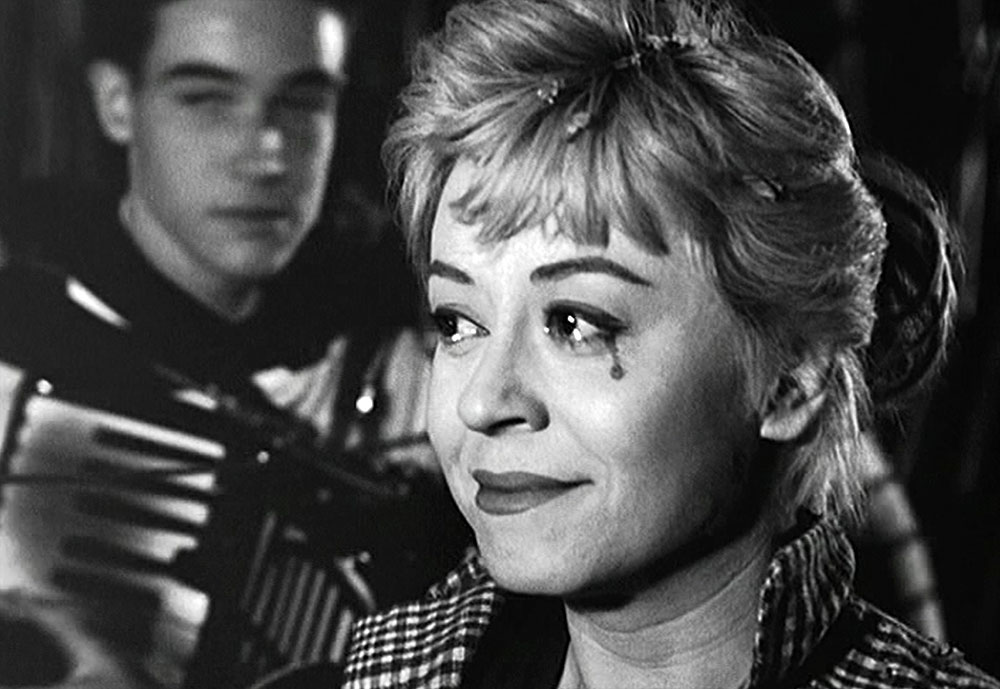 In Nights of Cabiria (1957), love isn’t love so much as it is work, and work to be exploited at that. The other half of Fellini’s quasi-innocence-amidst-turmoil diptych, after La Strada (1954), Cabiria is situated by the filmmaker and actor/collaborator Giulietta Masina within Rome’s wide class spectrum, from the cavernous luxury villa of a film star to the literal caves of the unhoused, the woman at its center hoping somewhere that solace and safety can be found. There’s a little joke in the title, implying that the evenings of its title character, a sex worker whose main turf is around the Passeggiata Archeologica, are filled with the kind of labor she has to do in order to make a living. But, instead of a punchline, the film evinces a vested interest in how her life is contextualized by the work she does, how it shapes and is shaped by the outlook she’s developed, and, ultimately, what she wants.

The only relationships in Nights of Cabiria that don’t seem to be fundamentally transactional are the ones with her sex worker friends in the same area, particularly Wanda (Franca Marzi), Cabiria’s long-suffering best friend. Every other interaction is tinged by the question of who is working for whom, or what someone can get from another. The man at the beginning of the film who leads Cabiria to believe that he loves her, the movie star who brings her to a swanky nightclub, the pimp who tries to convince her to find someone “to take care of her,” the stage hypnotist who puts her in a trance in front of an audience of guffawing men. We hear of how she’s spent money on her previous lover, and when her new one, Oscar (François Périer), pays for things, she becomes suspicious. Hope could slip away from her in these moments, but there’s a prickly determination to find happiness. That happiness, though, is inextricable from its class connotations. Happiness, for Cabiria, probably looks like a middle-class existence. The hope that simmers in her heart is one of ascension, and maybe a little depoliticization.What’s so much easier and more likely, what she’s hardened herself in preparation of, is that she will slip even further from the promise of bourgeois comfort.

If every interaction Cabiria has is framed by some kind of trade, does our love of the film, and for Cabiria (and thus Masina), recapitulate those same dynamics? Is Fellini and Masina’s ultimate triumph exposing the complicated exchange between viewer and art, audience and performer? In the final shots of the film, after we see the limits of love and work and how the two are painfully entwined, Masina and Fellini slowly sheer the film of its last pieces of artifice. We watch Cabiria walk along the road, among a makeshift parade, a tear painted on her face. Perhaps Cabiria’s little look to the audience will tell us whose love is for sale after all.

Nights of Cabiria screens December 17–30 at Film Forum in a new digital restoration.