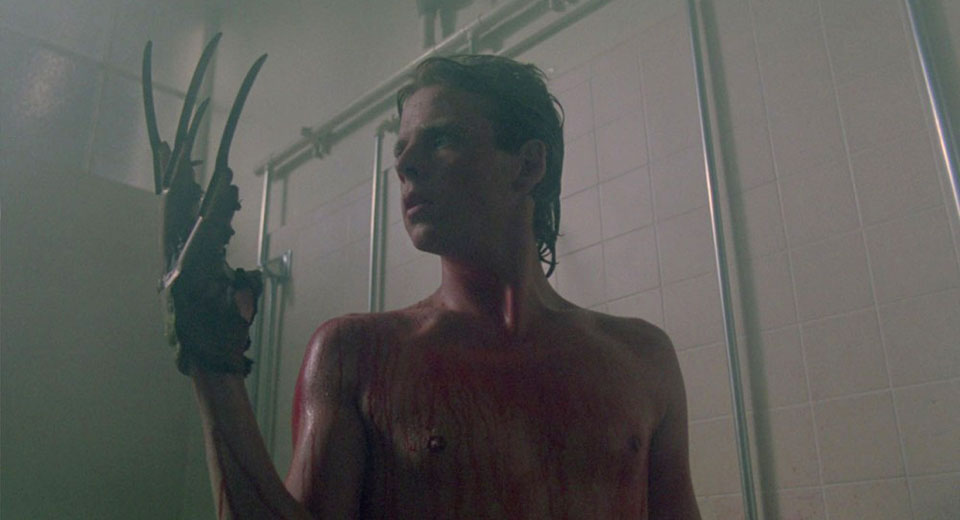 Something very strange and mystic happened to me
Something realistic and as weird as can be
Something that I feared, somehow is now endeared to me
And what a funny feeling, odd and yet so true
Did a thing like this ever happen to you?

Bing Crosby's tinny voice from a 1933 recording of "Did You Ever See a Dream Walking?" bookends A Nighmare on Elm Street 2: Freddy's Revenge, the pebble that started the landslide that is the Elm Street franchise, which to date comprises five sequels, two reboots, and one crossover spinoff.

To cap off 87 minutes of adolescents being shredded and boiled to death with a Crosby number from a light musical comedy is an appropriately perverse move for a film whose chief theme is perversity. Because what is the Elm Street saga really about? Is it about the waking nightmare of suburban existence, of asphyxiating in the stiflingly conformist landscape of Smalltown, USA? Is it about the horror of adolescence, when the body reveals a heretofore unimagined capacity to rebel and repulse? Yes, it's both of those things, but more fundamentally it's about the repressed, both on the level of the individual psyche and that of society. It's about the simultaneous danger and allure of transgression, of submitting to violation and penetration, and the anxiety this causes. It's also about everything modern industrial society represses about its own reproduction.

Jesse Walsh (Mark Patton) is a student at Springwood High in a fictional Ohio town. His family has just moved into the house on Elm Street in which the gory events of the first installment took place. From the very first night Jesse starts having disturbing dreams about a grotesque man entreating him to try on his steel-clawed leather gloves, which look kind of dangerous but also kind of kinky. If this strikes you as an erotic proposal, you're on the money. No doubt these are traumatic nightmares, but they're also literally wet dreams; Jesse wakes up drenched in sweat, frightened, ashamed—excited?

Freddy Krueger (Robert Englund) is a twisted stereotype of a lecherous pederast, but for Jessie he represents all the secret forms of pleasure forbidden and disavowed by his sterile suburban context. There's an erotic allure to this disfigured incubus who offers Jessie a partnership that will fulfil all his wishes, an analogy between queer desire and supernatural possession that becomes explicit when linked to the character of Springwood High's gym coach (Marshall Bell), who, rumor has it, "hangs out in the queer S&M bars downtown." He subjects Jesse to sadistic punishments by making him plank for hours in the blistering sun. Jesse fantasizes about vengeance, but is it really revenge Jesse craves, or does he secretly want the coach? The scene of the coach's comeuppance is ambiguous on this point; he is stripped naked and his wrists are tied to shower pipes while possessed towels autonomously whip his ass raw. Clearly Jessie's anxieties are here manifesting themselves in the form of a guilt-driven elimination of the object of his desire.

If Freddy Krueger were only a symbol of illicit lust we'd be done, but let's not forget that besides being a child-killer he's also a factory worker and thus also represents the production process, a process deliberately forgotten by a society that nevertheless owes its existence to it. The middle-class idyll of Elm Street is possible only through the exclusion of the industrial system, which is swept out of sight and relegated to the outskirts, just as the boiler room (one of Freddy's main hangouts) is a house's hidden heart. The factory where Freddy once worked is now abandoned and corroded, looking like Chernobyl after the meltdown. Freddy's revenge is also, then, the revenge of the industrial proletariat, coming back to haunt the civilization that tried to abandon it.