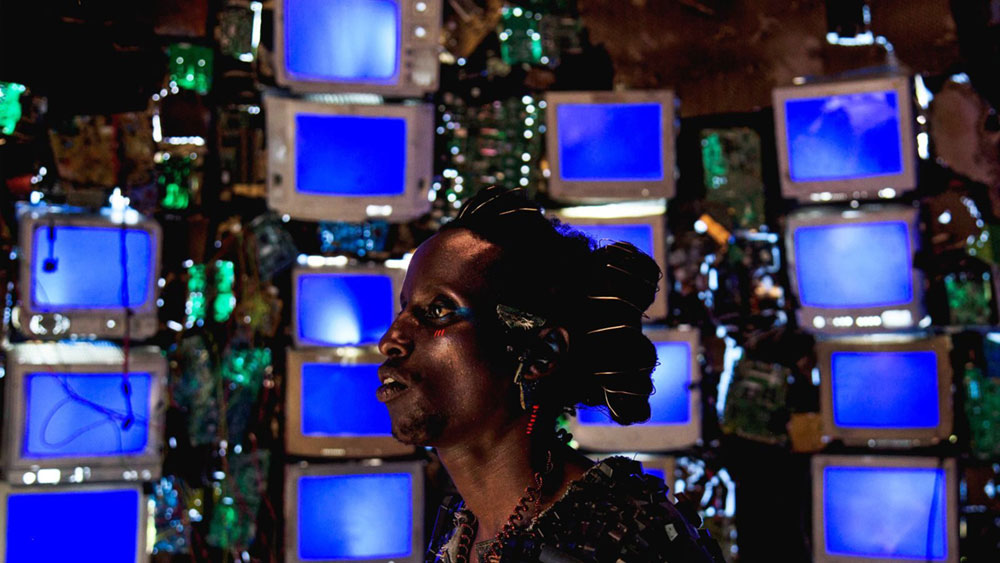 "Maybe you're asking yourself WTF this is?" The question, posed a little ways into the film, is not addressed directly to the audience, though it might as well be. If a certain awed bafflement has accompanied what we have seen and heard so far, there is still a relatively concise answer: Neptune Frost is an Afro-futurist science-fiction musical set around a hilltop e-waste encampment, around which gathers a community of hackers and outcasts. It is the debut feature of poet and musician Saul Williams, who co-directs with his partner, the actor and playwright Anisia Uzeyman, also the cinematographer. It is one piece of an ongoing, expansive multimedia project, Martyr Loser King, which also includes recorded albums and a graphic novel.

Matalusa (Kaya Free) is a young Rwandan coltan miner. The ore he and his brother, Tekno, haul out of the hills goes on to become tantalum electrolytic capacitors, essential components of mobile phones, computers, and other consumer electronics. When Tekno is struck dead by a foreman's shovel, Matalusa leaves home in despair. He is visited that night by a spirit above whose head bicycle wheels orbit like a halo, who instructs him to hack the normative framework of everything he has known, all that to which he has been brutally subjected. The next day, he finds himself on a ferry boat, quietly slipping on a pair of heels, following a shared dream to the invisible walls of Digitaria, where a cyborg is building sound systems.

Other characters begin to enter, with names like Memory, Innocent, and Psychology. The last comes from the capital city with news of student demonstrations and the attendant police violence. The students' chant has already traveled through the film as an earworm, heard off a phone and repeated in passage. Much of the film, in fact, is sung rather than spoken, in Kinyarwanda, Kirundi, Swahili, French, and English. Meanwhile, Neptune (Cheryl Isheja and Elvis Ngabo), a mysterious, perhaps messianic figure, approaches. Her arrival will generate enough power for both a dance party and a massive cyberattack, propelling the commune into the international spotlight and military crosshairs.

So that's basically what the fuck it is, though no synopsis could entirely account for the beguiling lyricism and visual plenty of this strange and wonderful film. It brims with ideas and desires, sometimes so much as to become overladen and unsteady. It always regains its balance in the group numbers, often invoking the syntax of the rap video, with Matalusa glaring into the camera, chanting along with his fellow miners. Wiliams and Uzeyman illuminate the resource extraction and de facto slavery of the global economy, casting those on whose backs the world is built as its ideal liberators, understanding that all that which is "virtual" is, of course, material.

I overheard some grumbling on the way out of the theater to the effect of "Who is this for?" (The correct answer to this rhetorical taunt is always, simply, "Not you, then.") The implication seemed to be that a film like this (Black, queer, low-budget) ought to say something simply and send everyone home feeling good about themselves for having seen it. Indeed, there is an expectation, among those whose attention is a form of charity, that everything must explain and apologize for itself. Those who wish to gain entry to Neptune Frost's techno-anarchist commune use an oft-repeated passphrase: "Unanimous goldmine." This film reminds us that it can be advantageous to speak in poetry to avoid detection.

Neptune Frost screens this weekend, October 2 and 3, at the New York Film Festival.