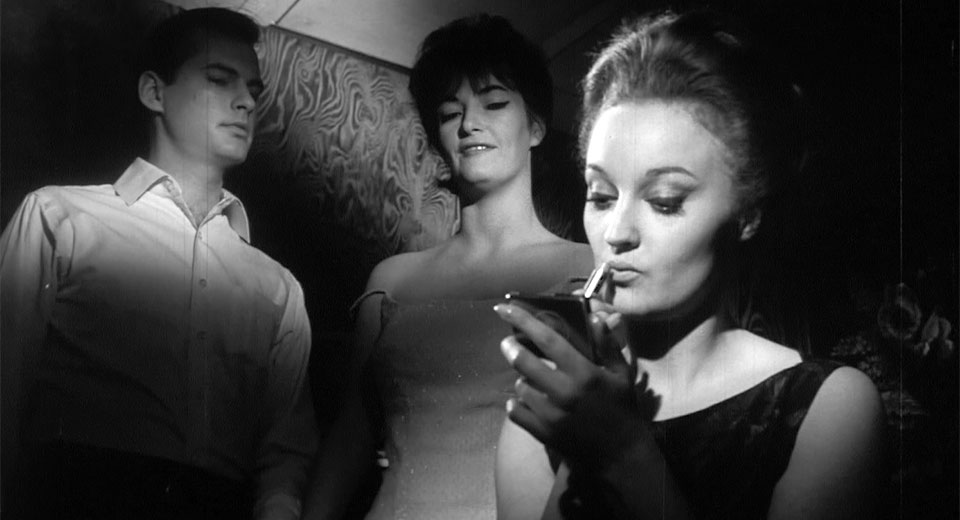 Considered completely lost for decades, Joe Sarno’s exquisitely pervy tone poem The Naked Fog is now gracing screens for the first time since its 1966 release. Thanks to an anonymous eBay collector and the restoration specialists at Film Media, the film is now ready to resume standing among its author’s peak run of artsy sexploitation dramas. Credited variously as Arthur Kraus, Peter Verlon, Jeff La Touche, Dick Kuzman and Monica Fitta when a changing industry compelled him to direct hard- and softcore porn later in his career, Sarno reserved his own name for dozens of no-budget, flesh-worshiping dramas genuinely curious about social relations during and after the sexual revolution.

Tammy Latour (in her first of three collaborations with Sarno) stars as Marge, a squareish writer navigating changing sexual mores from California to New England. We meet her on the West Coast, feeling alienated at a jazzy party where the women start disrobing spontaneously while their dance partners stop at loosen their ties. After her boyfriend is seduced by the party’s nude hostess, Marge flees as eastward as though escaping a zombie horde, soon falling for a married man with a taste for threesomes. Again unnerved by libertines, she settles in a seemingly quiet Long Island suburb only to stumble into a love triangle involving cousins. As though finally exhausted trying to outrun the new freedoms, Marge resolves to mine the “sin in the suburbs” (to borrow the title of Sarno’s most famous film) for writing material by taking up residence in a local brothel run by a madame obsessed with ending her son’s self-imposed virginity.

Like a more inclusive Russ Meyer, Sarno wastes no opportunity to lovingly set breasts of various shapes and sizes within poetic compositions. True to his sexploitation roots, nearly every scene in The Naked Fog features lingerie or female nudity, even as it strains dramatic credulity. For instance, the madame’s women all casually lounge around in their underwear and gossip before opening shop, like a preteen’s fantasy of what women are up to when he’s not around. Yet unlike many of his contemporaries, Sarno exhibits an ambivalence about the genre’s demand for displayed flesh. Nothing seems to have excited him more than putting breasts onscreen, but his stories also demanded desexualized nudity in service of seething melodrama. Scenes of sexual violence and humiliation feature plenty of skin but erase the film’s erotic mojo as the story probes power dynamics in a world remade by the pill. Sarno’s work is proudly pervy, but not merely that.