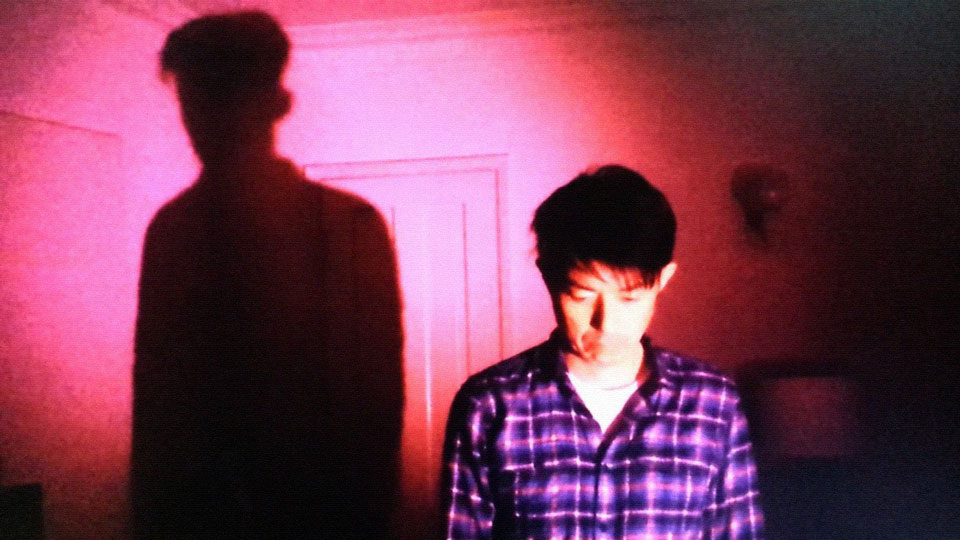 In the fall of 2019, the film festival I co-founded received an anonymous submission. Typically, submissions have a name, an address, other contact information, and a crew list. Yet this film, titled Murder Death Koreatown, had the word “Anonymous” written in every field. Our San Francisco-based event is the Unnamed Footage Festival, and we occupy a specific niche, programming exclusively what we refer to as “In-World Camera” films. This is defined as any fictional film in which the camera used to document the movie is an element of the narrative — including mockumentary, first-person POV film, and mostly found footage horror. Our mission statement is to showcase genre movies made to pull the wool over the eyes of an audience, however it is rare that the makers of a film attempt to do so to us as well.

For this reason and others, Murder Death Koreatown inspired the first ethical debate we have had over programming a submission. While the narrative itself is a construct of the singular filmmaker behind Murder Death Koreatown (henceforth referred to as “Anon” and MDK respectively), he used real events occurring near his Los Angeles apartment to invent a story in which DIY sleuthing draws him deeply into a well of paranoia and conspiracy. An improvised film created by reacting to one’s environment is not a novel concept – but one reason Anon has opted to maintain his secrecy becomes clear upon realizing the event that inspired him was the actual murder of his neighbor. Elements of the crime were altered, but the names, photos, and location are not fictionalized. It is easily verified; this is a found footage horror movie built around a real death.

Anon plays an amplified version of himself as the sole cameraman, working with an evidently lo-fi setup. A trifecta of unemployed, bored, and in possession of a camera, he becomes enveloped in a bizarre and potentially supernatural conspiracy around the killing, in which a woman stabbed her husband and then stumbled out of her apartment with her own wound, where she collapsed in a nearby alley.

“It was 2017, and I just happened to be walking, and I got a shot of this crime scene,” Anon told me over the phone. “Essentially, it was a real instance of found footage.” With his form exclusively behind the camera in MDK, his unmistakable voice is his only identifiable trait. “I did this project in complete isolation. At first, I was like, I can’t use the murder victim and I can’t use these names. Then six months later, I’m talking to a cut out of his driver’s license photo.”

By design, it is difficult to buy into the conspiracy. What we see is a picture of a young man alienating and radicalizing himself through a feedback loop of self-validating paranoia. In the opening shot we see a pan from a blurry photo of a man — perhaps an EMT, or a police officer — in suspenders and a surgical mask standing in the entryway of a building to Anon’s frowning girlfriend, her patience already thin from the first few seconds. As her dissatisfaction grows, Anon becomes convinced he himself might become a victim: “Are you going to try to murder me like that lady murdered her husband?” he prods. 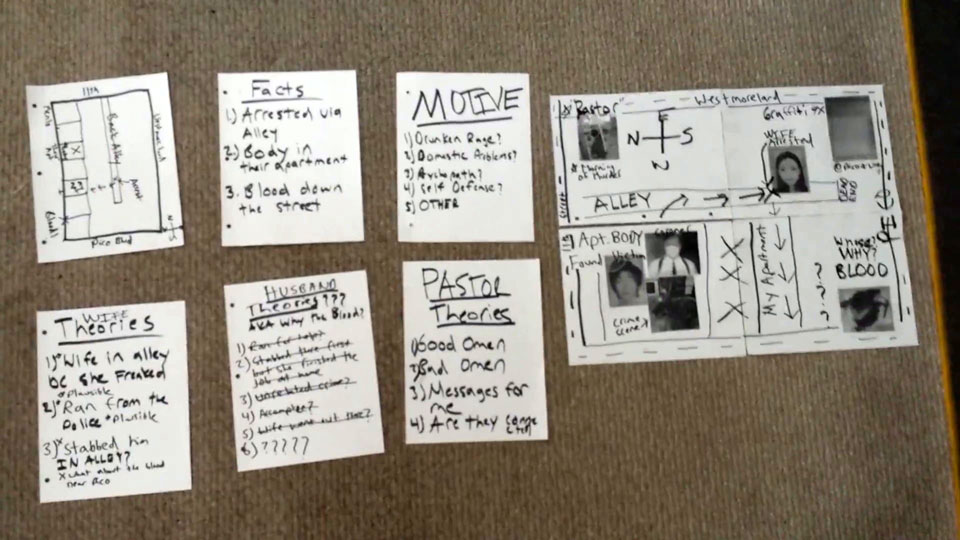 Aside from Anon, other characters’ appearances are brief, often because they aren’t acting. That’s not to say there are no staged sequences — while some of his seemingly casual neighborhood encounters have the tone of a prank show, the rest seem far more questionable. Reality blurs most in his wordless interactions, and things become alarming when a homeless man begins playing along. It’s hard to determine whether the man is mentally ill as he mumbles incoherent warnings and premonitions of doom. He gradually becomes a secondary main character, remarkably charismatic in his parroting of Anon’s questions. The notion of a mentally disabled vagrant being exploited for a horror film is troublesome, yet from the footage alone we lack the necessary context to arrive at judgment, uncertain of the man's background and his relationship to filmmaker, production, or his character. The most effective horror of MDK is the ethical alarm bells going off, the discomfort the audience must sit with in understanding there is a range from real to fabricated presented, yet unsure where the line has been drawn and who is in on the gag or even behind the camera.

Overall, it is unexpectedly funny, as uncomfortable as some scenes may be. Anon comes off as a dopey goofball — a man with a video camera fumbling through the streets of Los Angeles, shouting in muppety yelps that there is a portal to hell in his neighbor’s garage. But there is an added relevance at a time where something resembling the Satanic Panic of the 80s has begun to emerge from fringe online conspiracy theorist sects into the public consciousness.

In the weeks leading up to the world premiere, as the character of “a friend who found and edited the footage” with the username K-Anon, he maintained a Discord server, threads on 4chan, a fake radio show, and more. Supplementing the movie, he weaved an online campaign for his conspiracy to promote the release. I played along, identifying myself as an UFF festival programmer to his followers, honestly trying to figure out who the filmmaker was as well. 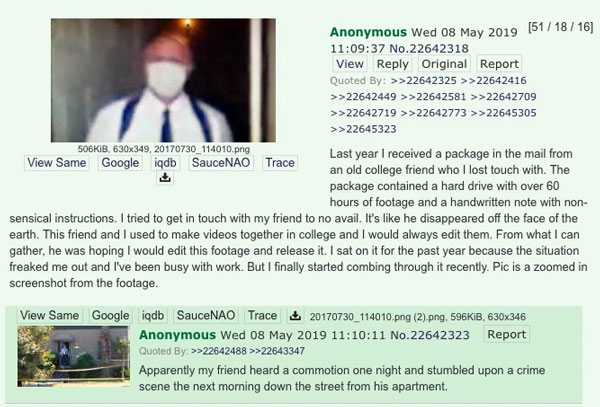 “It was easy to convince people online that it was a real conspiracy, since a lot of the facts about it are true,” he says. “The point is to draw attention to how easy it is to distort facts. People online were getting crazy. Someone even showed up in my alley! So please don’t believe in conspiracy. I don’t want to propagate a conspiracy. I am sorry if I have.”

Hours before the screening a young man approached me in the theater lobby, and again, I recognized him by his voice. He was probably in his late-20s, lanky, and nervous. After some convincing, he agreed to a post-screening Q&A if we would keep up the façade. I suspect he was afraid the audience might turn on him. Introducing the film, I told the room how the movie had come to us, how uncomfortable it had made us to discover certain elements were true, and how no one involved had been named. When the movie, which has no ending credits, abruptly stopped, I ran up the aisle of the theater shouting I had heard a rumor that the filmmaker was in the audience. Anon raised his hand, introduced himself, and the room erupted with comical shock. In bending reality, a unique experience had been manufactured for the seventy some odd moviegoers at the Balboa theater.

In the months following, MDK was self-released by Anon on Blu-ray and VOD, re-cut, and then re-released. Without any publicity past a few Facebook ads, his online viral marketing campaign, and reviews out of our festival, it spread by word of mouth and Letterboxd logs. The Bootleg Blu-ray edition touts 3 versions, “NORMAL”, “MR EDITION (NO SEWER VOICE)”, and “FOUND FOOTAGE PURIST (NO MUSIC)”, as if he is trying to create a different cut that is a reaction to each conflicting piece of criticism he has received. It is hard to say if the version I now own is the same as the version we screened, or as the original submission we watched. A creation of one person who just can’t stop tinkering with it. But that sort of unhinged fidgeting is what makes it so charming.

Murder Death Koreatown is available to stream via Amazon Prime or available for purchase through its official website.