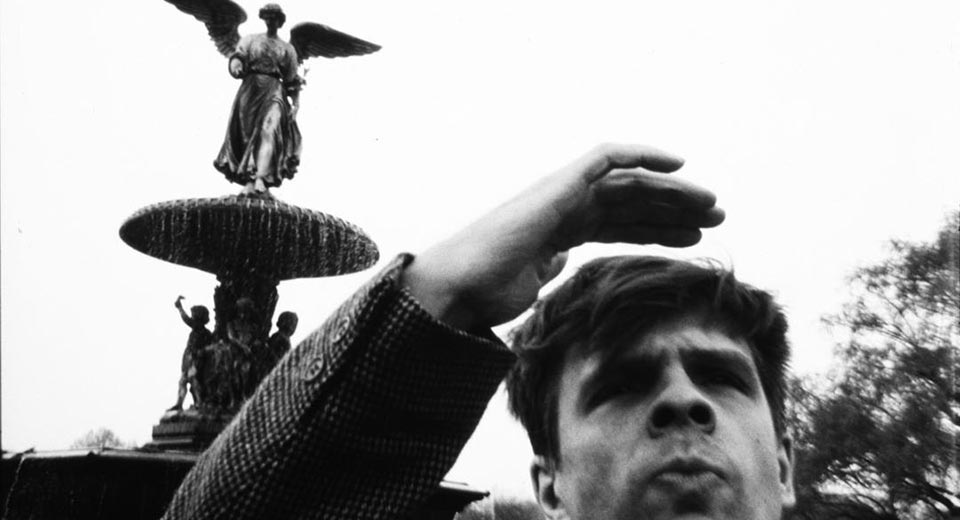 In Me and My Brother, Robert Frank tests this theory on the saintly image of Julius Orlovsky, brother of poet Peter Orlovsky, who Frank described as "a catatonic, a silent man." The film begins not with the real Julius but with an actor playing Julius. He sits in a corner, silent and blank, while his brother (also played by an actor) begs him to join him in a threesome, to be filmed by a two man crew with lights and a loaded camera. Julius doesn't budge. And when the image cuts to the real Julius—on stage with his brother and his brother's lover Allen Ginsberg at a poetry reading in Wichita—the actor's silence is proven to be a near-perfect imitation of his model's complete passivity. The two giants of Beat poetry shove their microphones into Julius' face and say, "Say something Julius!" Reluctantly, Julius leans forward and whispers "Something" into the mic.

Frank uses this image to pose a question: is Julius acting like the rest of us, or is he, as one of the film's character's claims "a new vision of today’s world... a saint?" To find out, Frank throws image after image at Julius to see if his sanctity sticks. There is Peter and Allen in a field in Kansas, the messy apartment on E. 10th street, an American flag, subway cars, the dentist's office, and a one dollar bill. If these images are questions, Julius offers them no answers. In the film's final scene Frank confronts Julius directly. "Say something to the camera," Frank shouts. And this time Julius stutters out an answer: "Well, the camera is a—it seems like a reflection of disapproval or disgust or disappointment or unhelpfulness or unexplanation-unexplaining-unexplainability to disclose any real truth that might possibly exist.”

It's the answer that Frank has been looking for. Julius understands that the eye of the camera is merely an extension of the eyes of other people. And so he acts too, knowing that he is being judged for the quality of his performance. He is not a saint, he is just an honest actor. Which Frank finds beautiful. But, still, there is his disappointment that he can't take Julius' picture with an honest camera.