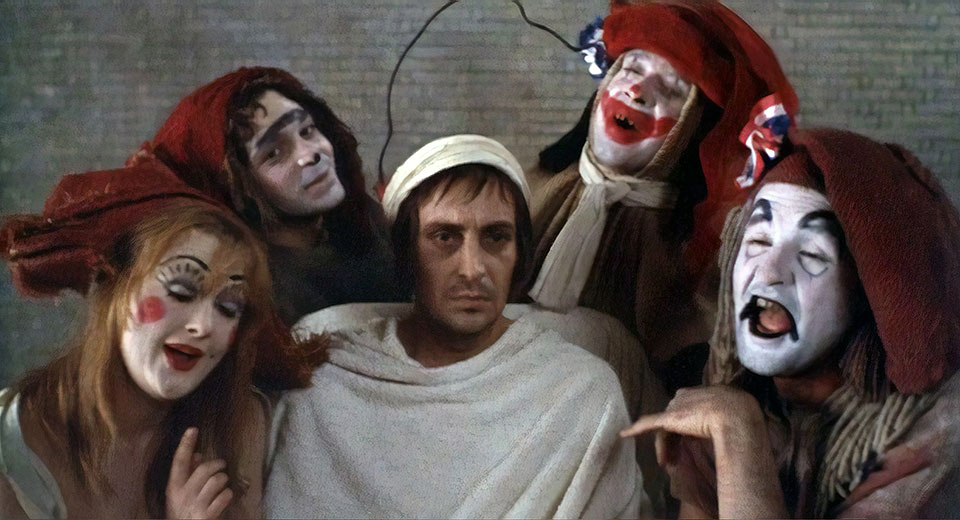 As part of the citywide celebration of Peter Brook, BAM presents a screening of Marat/Sade with the legendary director in person. Known primarily for his prolific theatrical work and his influential writing about the art form, his films are often viewed as satellite projects—i.e. complementary offshoots or film adaptations of his stage plays, which reign supreme. But Brook is equally talented as a film director, one whose motion pictures easily transcend mere “filmed theater” to create something new and wholly cinematic.

In particular, Marat/Sade, Peter Weiss’s landmark play, acquires new meanings as Peter Brook translates it to the screen. The plot exists on multiple levels of reality at once: mental patients (themselves with a tenuous grasp of the real) perform a play written by the Marquis de Sade about French insurrectionist Jean-Paul Marat that leads to a riot in the insane asylum. The film’s astounding ensemble, jarring close-ups, punctuated moments of direct address to the spectator, and handheld camera work emphasize these competing planes and contribute to the overwhelming revolutionary spirit of the production. Influenced by Artaud’s Theatre of Cruelty and Brecht’s alienation effect, Marat/Sade offers up a textbook primer on how to translate these radical approaches to the cinema, while still maintaining Brook’s singular sense of immediacy, his uncanny ability to create crystalline, catch-your-breath moments that are simultaneously simple and heart-stopping. (The assassination scene, in which the extraordinary Glenda Jackson repeatedly whips Marat with her long hair, is one such example.)

The chance to hear the 94-year Brook — who remains as eloquent as his writing in The Empty Space — speak about this visionary film, provides a rare opportunity for theater lovers and moviegoers alike to reflect on his expansive engagement with cinema.