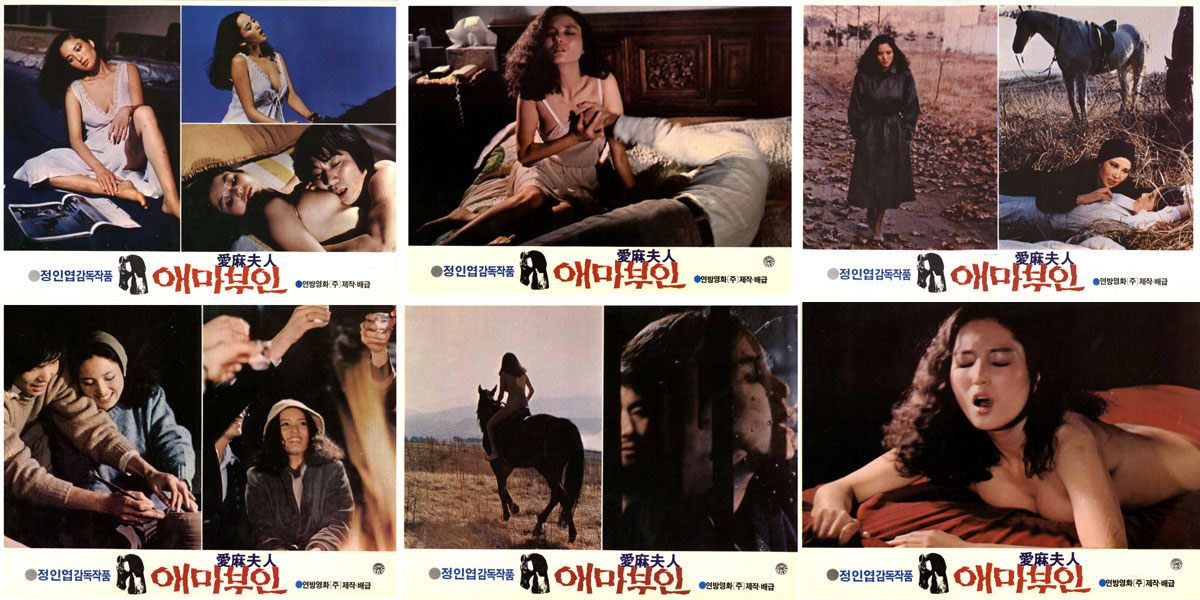 Enabled by the loosened censorship policies of South Korea’s Chun Doo-hwan regime, the release of Jeong In-yeop’s Madame Aema in 1982 inspired a wave of erotic films known as ero yonghwa. The film, considered the most sexually explicit South Korean film upon of its release, was an immediate success and even inspired ten sequels, making it one of the longest-running film series in the country. Each variation, from the generation-spanning Madame Aema 6 to the more explicitly homoerotic Madame Aema 11, follows the titular “madame” through marital strife and a subsequent series of steamy liaisons, sometimes encouraged by a sexy girlfriend and simultaneously hunted by judgmental in-laws.

Aema (Ahn So-young) is a stay-at-home wife to a wealthy businessman (Lim Dong-jin). She sits quietly in their mansion, but her hungry stare — a disarming look that opens the film — hints at an active imagination filled with fantasies. These dreams, of being thrown across a rocking chair or grabbed in the corner of a bar, frizzy hair flying about, never escape her mind. Instead she waits every night for her husband to drunkenly collapse next to her in bed and overlooks his deceptions. But when his ugly anger culminates in the attempted murder of a smart-talking bystander, his arrest presents a tempting opportunity for exploration. Between prison visits, Aema enters passionate affairs with both a charming young ceramicist (Ha Jae-young) and an aggressive past lover (Hah Myung-joong) who lives nearby.

In its heroine, the film recalls the wandering wife of Emmanuelle (1974) — Aema being a pun of Emmanuelle — and, in a more literal sense, the horse-loving youth Alan in Peter Shaffer’s play Equus. Indeed, the movie’s central metaphor for the harnessing of Aema’s sexuality involves a horse. The original intended meaning of the name “Aema” was “horse-loving woman,” though censors required this to be changed to the homonymous “hemp-loving woman.” This is hammered in by Madame Aema’s most famous scene, which features Aema riding nude on a horse until she reaches climax (a reference to another equestrian sex scene in Tinto Brass’s Caligula (1979)).

But as a motif, what appears to be a provocative freedom for Aema allows the film to maintain a conservative critical distance from the pleasure of its subject. The horse reappears and haunts the frame when Aema has sex with either of her two lovers, suggesting an inhuman primitiveness to a woman with such an unwieldy sex drive. And once her husband is released from jail, these animalistic pursuits immediately come to an end as Aema returns to his clutches. Though considered novel for its sexual content, the film’s staunch aversion to feminist ideals — autoeroticism outside of patriarchy altogether — proves it does little to break from the sexual politics of its time. At first, Madame Aema is eager to titillate the repressed yearnings of its audiences, but then it soon blocks all arousal before it may overflow beyond the screen, or inspire something more expansive and materially liberating than a hot fleeting night or two.