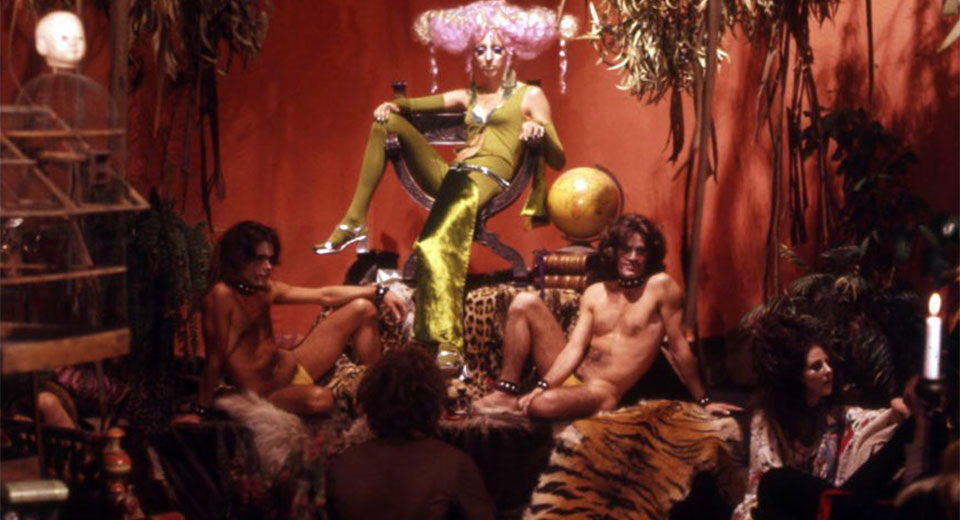 Steven Arnold’s first and only feature film Luminous Procuress closes tonight at Anthology Film Archives, in a newly restored 16mm print preserved by the Berkeley Art Museum and Pacific Film Archive in partnership with the Walker Art Center. A phantasmagoric farrago produced, written, and directed by the prolific photographer, painter, illustrator, production designer, and assemblage artist, Luminous Procuress takes the viewer on a psychedelic journey through a series of sumptuous tableaux vivants evocative of Fellini Satyricon and Vera Chitylova’s Daisies—except more explicitly erotic and unapologetically experimental. Or as Steve Seid states: “an elusive example of early seventies mystical queer cinema, known mainly through bootlegged VHS copies and battered prints.” Furthermore, it is this particular work which purportedly provoked Salvador Dalí to invite Arnold to Spain to train as his protégé, further cementing Arnold’s status and influence as a prodigious artist and eccentric in the years to come.

Of particular interest is the appearance of The Cockettes, a seminal gender-bending drag troupe who came to fame on the cusp of the 1970’s with their raucous live midnight musical extravaganzas. They are featured prominently throughout the film, as a kind of debauched chorus of enlightened nymphs who perform alternative states of consciousness for the high priestess Pandora. Light on plot and heavy on glitter, Luminous Procuress promises a feast for the eyes, accompanied by a stimulating synth score and proto-lexical spoken language (not quite “dialogue” per se) by Warner Jepson that massages the mind in Arnold’s resplendent meld. No doubt some savvy pop star will steal the visuals for their next music video, so catch it while you can so we can all pipe up and give Arnold his due.