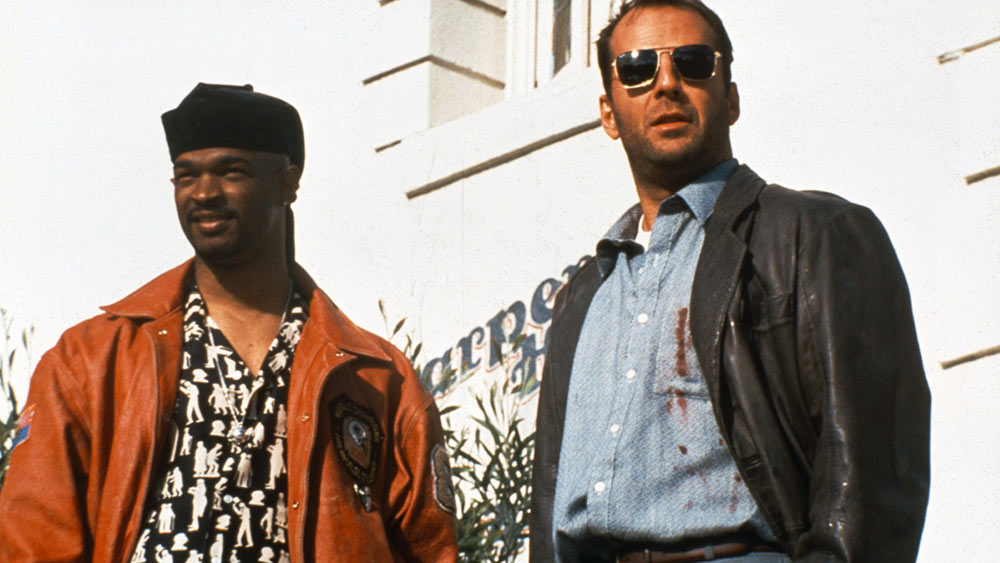 It’s hard to think of a writing and directing team more simultaneously exciting and confounding as Tony Scott and Shane Black. In 1991, the former was known primarily for his Tom Cruise–starring box office hits Top Gun (1986) and Days of Thunder (1990), and the latter for contributing humor-laced scripts to the similarly successful Lethal Weapon (1987) and Lethal Weapon 2 (1989). Outside of the sturdy sequel Beverly Hills Cop II (1987), Scott’s films were largely void of comedy and, instead, more concerned with establishing an assured sense of style, best exemplified in the stark excess of Revenge (1990), which more closely resembles the type of violent kineticism for which the director would be known later in his career. The Last Boy Scout (1991) may not be the film most would conjure when they think of either Scott or Black, yet it contains some of the best work of either alongside the dynamic pairing of Bruce Willis and Damon Wayans.

The Last Boy Scout is typically noted for its jarring opening sequence, in which a football player charges onto the field with a gun before opening fire. It’s an ominous and grim way to open a film that will be primarily a showcase for humorous banter and escapist bloodshed, but it helps to establish where Black was at the time of writing the screenplay. It’s no secret that the sale of the script was a controversy around Hollywood in the early ’90s, with the writer banking over one million dollars for his profanity-laden buddy movie, but he also penned it in the aftermath of a relationship falling out and a bout with depression. The Last Boy Scout may be remembered as light entertainment, but it’s also deeply nihilistic and confrontational regarding addiction and mental health—themes also present in Black’s Lethal Weapon or The Long Kiss Goodnight (1996).

It would be easy to write off The Last Boy Scout as just another generic ’90s action movie, but it belongs to an era when genre was amorphous and star power meant everything. This is an expensive (for its time) Hollywood production with A-list actors and two of the more sought-after key players behind the scenes, yet it manages to operate as a shaggy private-eye film, a conspiracy thriller, and a buddy comedy, and to feature enough broken noses, bloody squibs, and explosions to sate the action audience. Looking back at The Last Boy Scout thirty years later is bittersweet: Tony Scott is no longer with us, Bruce Willis is starring in a DTV programmer every month, Damon Wayans coincidentally starred in the Lethal Weapon TV series until 2019 before retiring from acting, and Shane Black gifted the world The Nice Guys five years ago. It’s probably the closest approximation we’ll ever get to a PM Entertainment riff on The Long Goodbye (1973).