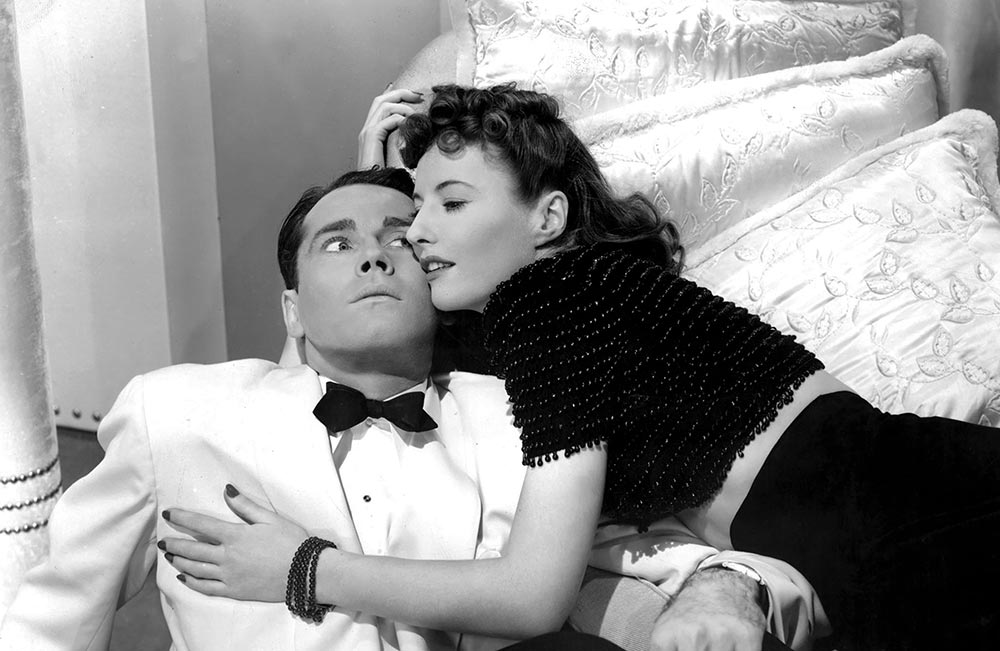 There’s so much to love about The Lady Eve (1941). Consider how magnanimously Preston Sturges expanded the frontiers of the binary battle-of-the-sexes psychodrama. His pinnacle of the screwball form portrays that age-old conflict as not just funny but thoroughly absurd. A millionaire snake scientist and brewery heir, nicknamed “Hopsie,” falls prey to a gang of card sharps, first on a luxury cruise and then at his family mansion—this second, double-or-nothing round arising from an unexpected mutual attraction between the chief grifter and her mark.

In 1941, a convincing movie romance called for the delicate art of Hays Code circumvention. Like his dialogue, Sturges’s casting here is perfect—with sincere Henry Fonda, who’d just become Hollywood’s official Tom Joad and Abe Lincoln but wasn’t yet its Wyatt Earp, and sly Barbara Stanwyck, herself between the decidedly pre-Code Baby Face (1933) and the austere fatale ideal of Double Indemnity (1944). Neither would ever be funnier than in The Lady Eve, and the chemistry between them is as hot as it is beautifully articulated. (Within a fine supporting ensemble, Sturges regular William Demarest adds essential seasoning.)

Naturally, temperatures rise when his snake gets loose. After a righteous fluster, they let themselves fall cheek-to-cheek into prolonged titillation, the bright banter spinning into a racy fantasy of future matrimony:

“I want him to sort of take me by surprise,” she says, softly working him up.

“That’s right. And the night will be heavy with perfume. And I’ll hear a step behind me, and somebody breathing heavily, and then . . . ” Moaning, she leans back, waits a beat, says, “I think I can sleep peacefully now.”

He teeters and tugs at his collar, grumbling, “I wish I could say the same.”

Her only possible answer: “Why, Hopsie!”

The film scholar Matthew Bernstein puts it this way: “When self-regulation was well-calibrated—and this was a moment-to-moment, scene-by-scene, film-by-film achievement—there was wiggle-room that would let innocent viewers remain innocent while letting sophisticated viewers feel sophisticated.” Such calibration was the Sturges touch, and here he makes that wiggle into a dance, pulling it off repeatedly and with contagious amusement but without condescension.

That chaise-lounge seduction is of course the poster moment, but by no means this movie’s only excellent set piece. In fact, all films spun from card games and long cons, romantic or otherwise, owe something to the fluency of The Lady Eve. It takes both common and uncommon sense to suggest that every good swoon is a game of chance, that every lover may be a rival as well as a teacher. How alluring that the Preston Sturges idea of Eden is a place of perpetual growth.

The Lady Eve screens tonight, January 21, through February 2 at Film Forum on 35mm as part of the series “Written and Directed by Preston Sturges.”