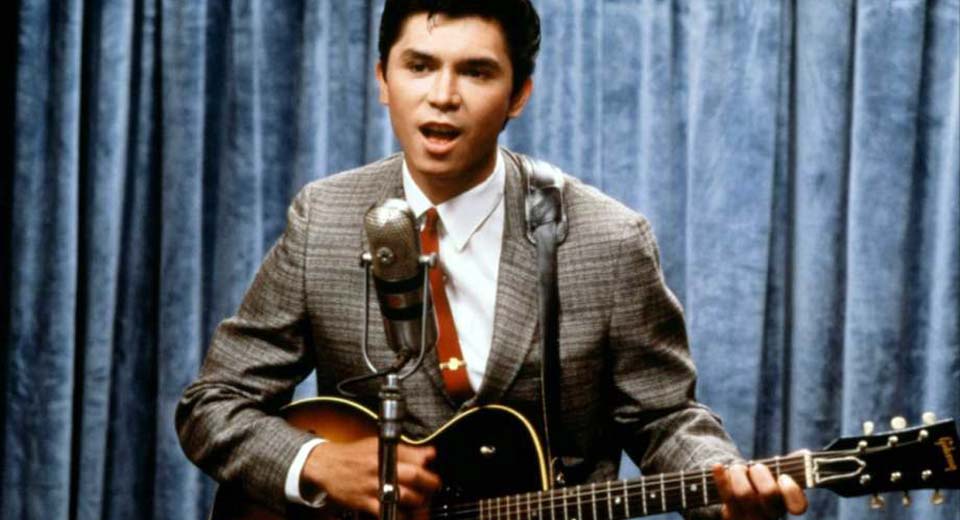 If you didn't know that teen rock n' roll star Ritchie Valens died in a plane crash along with Buddy Holly and J.P. "Big Bopper" Richardson, none of the ominous foreshadowing in Luis Valdez's biopic La Bamba (1987) would make much sense. A recurring nightmare in which two jets collide in midair and rain burning wreckage onto Ritchie's childhood best friend, along with Ritchie's frequently-mentioned fear of flying, would seem gratuitous, but knowing what they're pointing forward to washes the movie in fatalism.

Ricardo Valenzuela (Lou Diamond Phillips) is introduced working in almond fields in Northern California with his mother and fresh-out-of-prison brother, Bob. The family goes south for the greener pastures of San Fernando, where Ritchie goes to high school and auditions for local garage band The Silhouettes. A character trait that may or may not be grounded in historical fact has Ritchie carrying his guitar everywhere he goes, from fields to high school hallways, dropping hints of his future stardom with confindent quips like "My dreams are pure rock n' roll" and "It's my future."

As Ritchie's American Dream unfolds, from singing around a campfire with his fellow Chicano farmhands, through his first record deal in Bob Keane's (Joe Pantoliano) basement recording studio, to headlining with The Everly Brothers and Chuck Berry in New York, his success feels all but preordained. Where did his angelic voice and guitar-dexterity come from? Did he ever have to struggle with chords or his breaking adolescent voice? In more ways than one, Ritchie is portrayed as a true natural, his eventual fame as his rightful destiny.

Depictions of the fifties are always saturated with nostalgia; from Peggy Sue Got Married to The Shape of Water, you've always got the drive-ins, the bobby socks, the pompadours, and the gleaming mint-green Cadillacs. La Bamba is no exception; from diner booths with coin-operated jukeboxes to teenage girls saying "So keen!", there's no shortage of moments to make you dream of a simpler, kinder past. If the fifties also symbolize sexual repression, unfettered patriarchy, and Cold War paranoia, then La Bamba puts less emphasis on these elements than, say, Far from Heaven does. White cowboys might seem hostile to Ritchie's brown skin for a second, but he instantly bowls them over with the power of his voice and annihilates any trace of racist hatred. One of the film's only sustained critiques of the period's prevailing attitudes is the character of Ritchie's brother Bob, who gets drunk and beats his wife, even complaining, "I almost have to rape her just to have sex." While these attitudes were (and still are) prevalent, the screenplay primarily attributes them to Bob's inherently rotten, good-for-nothing personality, or, at best, his culturally determined machismo.