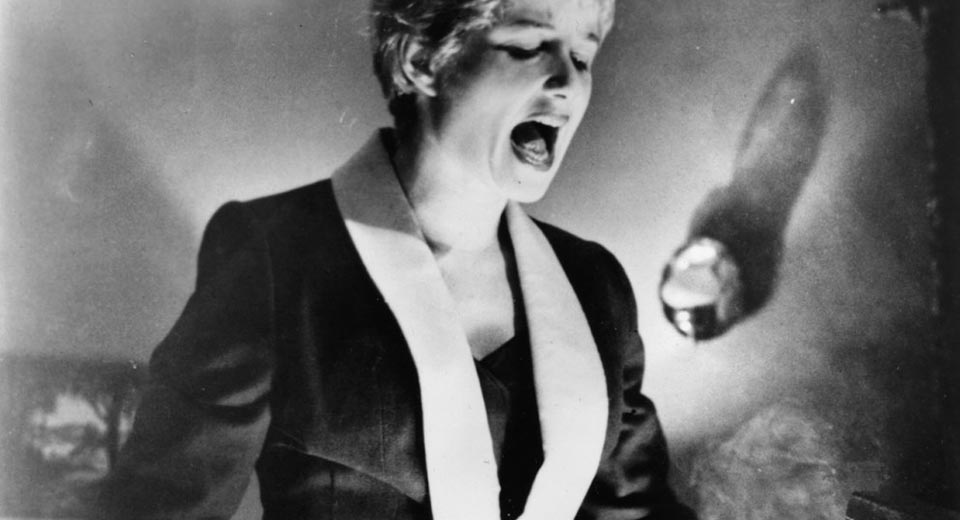 Little but the title survives of Mickey Spillane’s 1952 source novel in Kiss Me Deadly , but the well-known persona of the blunt, rightwing author and his misanthropic dick Mike Hammer are a rallying point for the baldly subversive aims of Robert Aldrich and screenwriter A.I. Bezzerides. Downgrading Hammer to divorce PI, swapping dope for a radioactive whatsit, laying bare Hammer’s crude sadism, and infusing the story with a queer sensibility, it’s a violent, sexy, brilliant, and above all idiosyncratic atom-age noir. As Spillane has said in adorable earnest, “Why did they do that? Why did they mess up something so good?”

When a distressed woman clad in nothing but a trench coat sends Hammer’s Jaguar careening off the side of the moonlit highway, he gives her a lift that’s quickly truncated by an unknown cadre of thugs up ahead, who torture the woman to death and send Hammer to the hospital. Setting aside his investigations of philandering spouses, whom he baits and blackmails with the aid of his sultry assistant, Hammer connects with a waify woman whom he identifies as the victim’s roommate and applies his limited intelligence and sadistic methods of inquiry to chase after—what, exactly? In Alain Silver’s estimation, he’s an “anti-Galahad” in search of noir’s Holy Grail.

To find it, he trudges through a mythic labyrinth of alternately sunbaked and nocturne urban dystopia, atomic anxieties, mob corruption, Victorian romantic poetry, jazz, and violence, much of it perpetrated by his own beaming mug against an unforgettable array of colorful supporting characters. It’s a wonder the movie was ever made—maybe it has to do with Aldrich’s own family connections in publishing, politics, and business—but cinema’s inestimably richer for it.