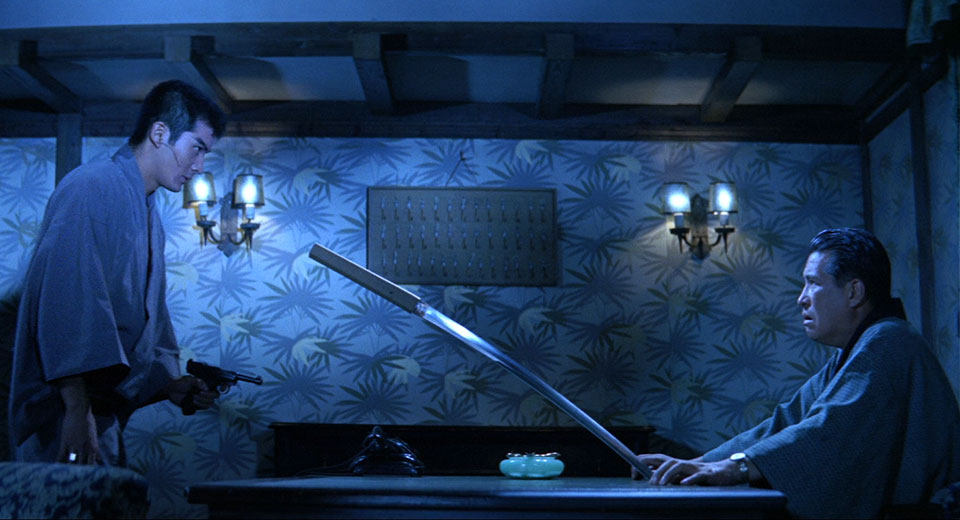 Seijun Suzuki stuffed Kanto Wanderer (1963) with enough melodrama for a Hollywood weepie and enough eye-popping saturated color for a Technicolor sci-fi saga. The film is as difficult to follow as one would expect from a director who prized grand gestures and pizzazz over plot legibility, though a convoluted storyline does little to interfere with its emotional resonance.

Sporting delicious fake eyebrows, heartthrob Akira Kobayashi stars as Katsuta, the faithful underling of an old-fashioned yakuza boss, Sota Izu. Both men wear kimonos while their rivals, the Yoshida clan, wear moddish suits and carry guns. The Izu clan’s outmoded codes of loyalty and tradition are fading even within their own gang, as a reckless upstart named Tetsu runs small-time badger games (luring men with the promise of sex and then blackmailing them) on the side with a local high schooler, Hanako. Izu tasks Katsuta with finding the girl, a friend of the former’s daughter, after Tetsu sells her to another pimp. In the course of his search, Katsuta encounters an old flame, a card cheat (Hiroko Ito) whose brother belongs to the Yoshida clan. Their rekindled romance tests his loyalty to the boss, whose teenage daughter is also in love with him.

Kanto Wanderer is periodically bathed in the chromatic extravagance for which Suzuki is now best known. Lighting shifts turn two-shots into silhouettes and scenes abruptly cycle through hues to indicate sunsets or flaring emotions. The effects are theatrical in origin but seem so patently cinematic here that it seems a shame they’ve never been widely adopted. The costumes and sets are similarly designed with an eye toward contrast and unnaturally vivid color. Without quite reaching the full-bore pop art heights of later films like Tokyo Drifter (1967), Kanto Wanderer is nonetheless instantly identifiable as the work of Seijun Suzuki.