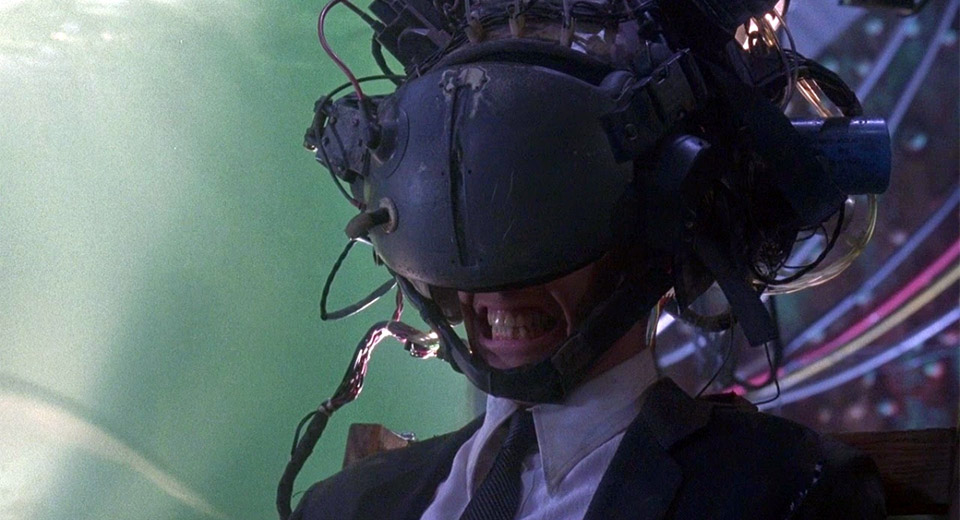 This is a long read from our new book 1995: The Year the Internet Broke, published in conjunction with our film series of the same name.

The most important thing to remember about Johnny Mnemonic is that it’s a good movie. Good movie, full stop. Even if it failed to meet the ambitions of its impressive braintrust, it remains a coherent, visionary, exciting piece of popular entertainment, as good or better than any other pre-millennium studio sci-fi outing. Twenty-five years of bad vibes and misguided memes would have us all think it’s a risible money pit of shopworn conceits and stiff line readings. (More about the latter in a minute.) “A disaster in every way,” chortled the New York Times, while the Chicago Tribune compared it negatively to its video game tie-in. You’ve probably seen tweets or posts snarkily quoting the “Room Service” monologue with no regard for the ironic core of William Gibson’s script. But it’s really actually good, no nostalgia goggles required.

Keanu Reeves plays the title character, a “mnemonic courier” who’s able to join the middle class world of high thread counts by lending his brain’s storage space to organizations in need of ultra-secure data transmission. His mind plays Uber to corporate/criminal secrets, and he’s happy with the arrangement, except for the small inconvenience that the space required for his storage implant was previously occupied by childhood memories. The tangle of data he calls a personal history has been cleared to make room for corporate fodder so secure even he has no access to it.

Reclaiming his memories can be done for the right price, which is why Johnny takes the proverbial “last job” from Udo Kier’s fixer. He’s so desperate to reconnect with his past he declines to tell a client seeking 320gb of storage that his brain maxes out at 160gb. By overclocking his storage capacity he risks “synaptic seepage” from the storage implant into his brain, providing the movie with that ever-faithful urgency engine, the countdown. In this case Johnny has 24 hours to transfer the data before mind splits into data shards.

“But that’s ludicrous,” shouted an army of plothole aficionados for the next two decades. “In what way is a brain more secure than disk storage or encrypted internet transfer? Even in 1995 that was stoooopid.” Congratulations you clever boys, your reward is in hell. Until then, your podcasting career awaits.

The Yakuza ambush Johnny and his clients moments after he receives the payload in his head. He survives the massacre but is forced on the run and into the arms of the Lo-Teks, an insurrectionary band of guerrilla pranksters hoping to cure an epidemic of NAS (Nerve Attenuation Syndrome) and take down the corporatocracy. The illness, also known as the black shakes, results from too much exposure to personal electronic devices. Led by Ice-T and a cyborg dolphin named Jones, the Lo-Teks, as their name suggests, think we’d be better off with less screen time. Johnny fell in with the right people, because it turns out that the bomb in his brain contains the cure for NAS, which Big Pharma’s assassins hope to keep under wraps.

Johnny Mnemonic was the sole directorial effort of visual artist Robert Longo, perhaps best known for his massive charcoal drawings of sharply dressed yuppies convulsing against white backgrounds in the 1980s. Longo was thus the ideal choice (though Cronenberg comes to mind for obvious reasons) to interpret Gibson’s landscape of fried nervous systems twitching against a second-by-second tidal wave of stimuli. But to be sure, there is some stiffness in the way he directs actors delivering Gibson’s sardonic dialogue. His assembled cast prominently features Personalities for whom naturalistic acting is secondary in both skill and appeal, including Reeves, Kier, Dolph Lungren, Ice-T, Henry Rollins and Takeshi Kitano. The collaboration of a first-time director with a crew of nonactors produced its share of awkwardness. Which brings us to The Monologue:

Reeves delivers the cri de cœur in his parabolic near-monotone, a stirring but narrow bandwidth of expression that’s all mouth and no eyes. But his limited range perfectly suits the moment in which Johnny crawls out of post-industrial capitalism’s anaesthetic bath to see if his legs still work. As Gibson put it in an interview, Johnny “manages to become human” by forsaking on-demand cold Mexican beer and the like. Of course he still wants room service, the infantilizing treat tourists afford themselves when putting on pants and paying reasonable prices for food present too large a challenge. It’s as though Neo jammed all four fingers down his throat to purge the red pill after it had already dissolved. Johnny mourns his estrangement from the comforts for which he sacrificed his mind and articulates his desires as a list of commands a computer could understand. What’s left is a spiritual reclamation project divorced from commodity fetishism. Simply put, it’s time he fought The Man. In its crude legibility, the speech recalls the critique of ideology in They Live and the recited catalog of advertisement jargon in Bresson’s The Devil, Probably.

We’re now one year out from the film’s 2021 setting, and like most great science fiction, Johnny Mnemonic has proved insufficiently pessimistic about the future’s propensity for dehumanization. Withholding a cure is a far quainter scheme than gauging prices or flooding the market with drugs designed for abuse. The physical symptoms of NAS would be far easier to treat than the diffuse emotional and mental trauma of the compulsively online. But more crucially, corporate messaging occupies a far more extensive tract of our humanity than Johnny’s implant. For enough money, a surgeon could snip out the pieces of not-Johnny like a tumor, and for a few more dollars an engineer could provide a “full restoration” of his memories. Our own entanglements with the corporate technocracy are not so easily severed.