Jessica Wilson, "Not Normally at Rest" 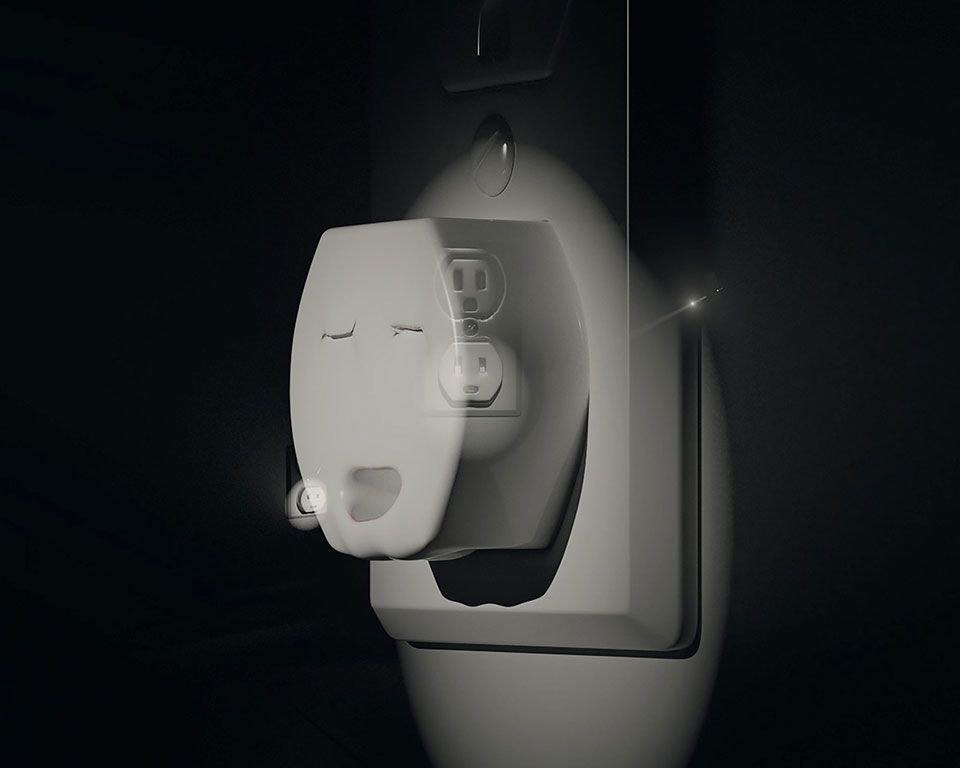 Not Normally At Rest (2020) is a series of four computer-generated animations by Jessica Wilson, the total runtime of which is about 12 minutes. Its subject is the common electrical outlet, the duplex faces of which are cast as analyst and analysand in a therapeutic dialogue. They conduct each session in squelching, synthetic gurgles, gauzy transitions giving way to traumatic memories: the insertion of a childproof socket cover, a short circuit. In the later videos, the afflictions become more complex. Part 3 (the Musical) triggers performance anxiety with velvet curtains and a spotlight. In Part 4's nightmare of redundancy, the fixture falls out of its housing and encounters a shower of identical spares.

Wilson has in the past made a point of foregrounding the electrical components on which her work runs. A large tangle of blue extension cord accompanied her installation of Smile Driver (2019). Nightlights and cable extenders have elsewhere convincingly combined for sculptures. Although the ruddy-faced cherubs that populate some of Wilson’s other videos are absent from this series, a number of motifs do recur. Finger-smudged glass is an evident preoccupation, as are the fiber-optic cables and manhole covers which form the title sequence. Infrastructure spills out from behind the wall and under the street into a world where it is primary.

It is not so much the endowment of outlet faces with human neuroses that sustains interest, but more so the evocation of disuse. Each part begins in the same place, about knee-high in the far corner of a blank, white room. It is perhaps under renovation, or else abandoned. Its floorboards are crooked or missing, their safe caches looted and exposed. A tepid piano phrase mixes with street noise. A full-length mirror leans against the wall. Next to it, a bookcase holds also boxes, vases, barbells. In this opening shot, there is a perverse emptiness common to the room for rent, the vacant building, the shut-down city. The most intriguing seconds of the suite come at the beginning of Part 4, when colors and details of the room flicker in and out. The effect recalls a sequence in Smile Driver in which locations cycle through the background, time seeming to wash over the characters while their eyebrows grow to curtains on their faces.

The series was created last spring and released over the course of July as an online exhibition with the gallery PAGE (NYC). The videos are now running on two monitors in the bowels of the New Museum as part of its "Screen Series." If you'd think twice before paying admission to somewhere that recently laid off 27% of its full-time workforce (while its executives continue to receive six-figure salaries), then you'll be glad to know the work is still watchable in full on the gallery's website.