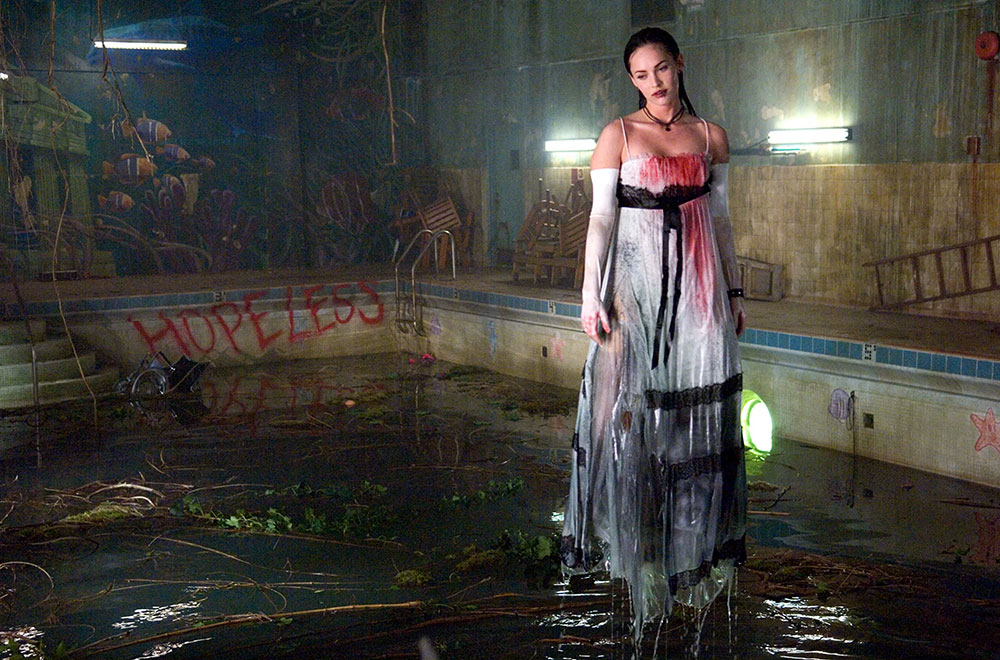 Director Karyn Kusama’s Jennifer’s Body has come a long way from the misunderstood, mis-marketed, and critically lambasted box office turkey that it was upon its release in 2009. Just barely breaking even in the domestic market, it was quickly torpedoed by critics hungry for a chance to swat down its men’s-magazine-cover-adorning star, Megan Fox, and its debut-film-Oscar-winning screenwriter, Diablo Cody. Reading the likes of The Boston Globe’s Ty Burr, the malice is palpable. Now, after an all-out post-#MeToo critical reevaluation that even summoned Richard Brody to the frontlines to praise the film for the “overwhelming symbolic power of its intricate premise,” the film has breached the walls of one of the towering institutions of art cinema canonization, the Museum of Modern Art, ensuring that no one outside the incelsphere will henceforth dare to patronize the filmmakers or question the film’s validity as a critical feminist text.

The confused reception of Jennifer’s Body can for the most part be chalked up to the studio’s decision to aggressively market it to straight men. This was a patently dishonest move; contrary to what the posters promised, the male gaze ultimately finds very little to graze on (if proof is needed, listen to Cody recount the time when a test audience member wrote on a feedback card, “Needs more bewbs”). Johnny Simmons as Seyfried’s boyfriend is the only even remotely multifaceted male character, while all the other men are one-dimensional caricatures: hunk, emo kid, creep. Beyond representing a refreshing gender reversal, this choice also makes projection and identification impossible with practically everyone except Amanda Seyfried’s character (and, to a lesser extent, with Fox’s). Didn’t it ever occur to the affronted male critics that they were far from the film’s real target audience? It centers themes of female friendship, of socially foreclosed queer desire, and, in Cody's own words, “of consent, assault, and male abuse of power” — not traditionally the hottest selling points for college-aged men.

With thirteen years of distance, Jennifer’s Body also stands out as an excellent time capsule of a certain flavor of late-aughts white-boy music and fashion. For better or worse, it takes you back to a time when you couldn’t escape hearing Hot Chip emanating from your friend’s iPod dock or Paramore from your little sister’s favorite CW series. The fictional indie rock band Low Shoulder, fronted by an eyeliner-wearing Adam Brody, is based on the likes of Dashboard Confessional and Fall Out Boy (whose poster features prominently over Jennifer’s bed) and stands in for a whole cosmos of emo-inflected pop acts that, somehow, captured the hearts of an entire generation of American adolescents.

Cody based Jennifer’s sad groupie aspirations on her own fandom of bands like The Replacements and Soul Asylum but wanted to explore the dark side of a new breed of male rock stars “who seemed like they were on your side.” She told Billboard, “I grew up in the ‘80s where if rock bands were dirty, they were overtly dirty — Mötley Crüe and Guns N’ Roses, singing really explicit lyrics about objectifying women, and assaulting women. I could go that direction … [but] wouldn’t it be more interesting if it were these guys who presented as very soft and sensitive and romantic … and in reality, they’re pigs?” This is indeed one of the film’s most effective reversals: skinny-jeaned softbois singing about their loneliness and their fragile memories while reigning over an oppressive culture of victim-silencing and driving potential accusers to self-doubt and madness. In the light of this far-from-flattering portrayal, it’s surprising that indie acts like Panic! at the Disco consented to be on the soundtrack. Less surprising is that Fall Out Boy’s Pete Wentz apparently turned down the role of Low Shoulder’s Satan-worshipping frontman.

Jennifer’s Body may have failed to do the kind of lasting damage to Cody and Fox’s careers that its detractors hoped it would, but it should leave us thoroughly disturbed about the unspeakable evil that lurked beneath the surface of the late-aughts indie rock scene.