Interview with the Vampire 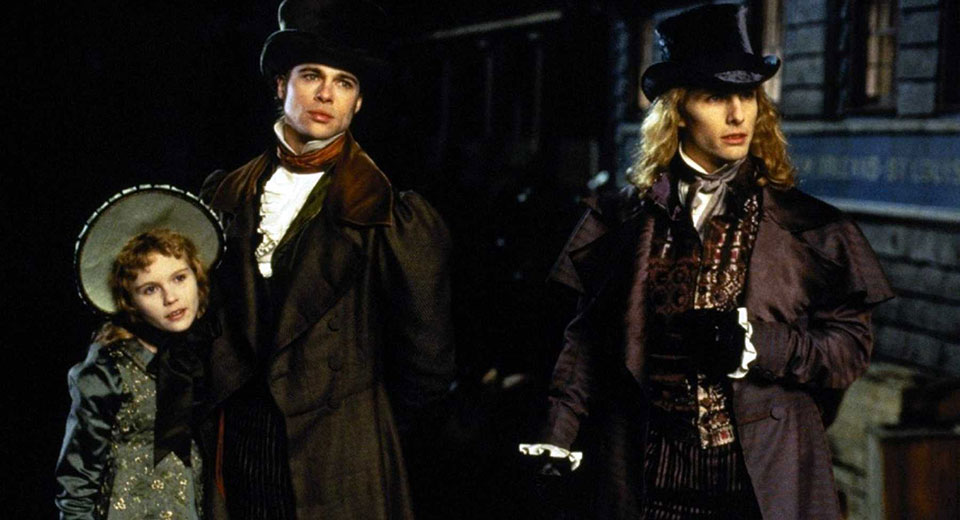 Hot off the surprise success of The Crying Game, Neil Jordan was offered Interview with the Vampire, an adaptation of a scary-horny 1970s bestsellerstarring the biggest movie star in the world (Tom Cruise) and his heir apparent (Brad Pitt). The finished film may be the most fascinating big-budget hit of the 1990s: dour, queer, pornographically violent, and unapologetically baroque. Not until Eyes Wide Shut would a Hollywood release tantalize multiplexes with so much forbidden sex. If none of the above compels, let’s remember that Oprah walked out during the first act because she felt the whole thing was a “force of darkness.”

Pitt’s Louis is an eighteenth-century plantation head reeling from the deaths of his wife and infant child. He stumbles through New Orleans with a death wish until Cruise’s Lestat appears and offers two methods of escape. Lestat can end Louis’ agony by bleeding him dry, or he could grant the bereaved slave owner new life as a vampire. Surprisingly, given his misery, Louis chooses immortality, and the two perform an airborne erotic dance of neck-sucking and smeared blood. Thereafter they are companions, a lonely twosome in which Cruise acts as both father and lover. Louis fights his new nature, feeding on rats to avoid killing humans, while Lestat taunts him to accept their godlike transcendence of human morality. When their union hits the rocks, Lestat decides, naturally, that raising a child will bind them closer together. So they bestow the “dark gift” on an orphan (Kirsten Dunst) forever after doomed to inhabit an eleven year old body. At heart, Interview with the Vampire is a story of the perpetual burdens and shared loneliness of family life. Without the intrusions of aging and death, the trio have centuries to sharpen their animosities.

While Pitt glowers from the corners, Cruise throws the kitchen sink around production designer Dante Ferretti’s lavish sets and Dunst gamely keeps pace. True to form, Cruise brings his terrier intensity to the role, which calls for more subtlety if it is to suit Jordan’s literary vision. Still, the spectacle of watching Maverick in a blond wig and purple satin waistcoat wringing a dead rat into a champagne glass has a campy charm worth the price of admission. The film’s lofty ambitions are better realized when Jordan digs into the pageantry of vampirism during an astonishing sequence set in a Parisian theater run by a decadent coven. “Vampires pretending to be humans pretending to be vampires,” Louis observes while Stephen Rea and Antonio Banderas juxtapose a real feeding with pre-Grand Guignol showmanship before a shocked audience, who, unlike Oprah, make it all the way to the end of the show.