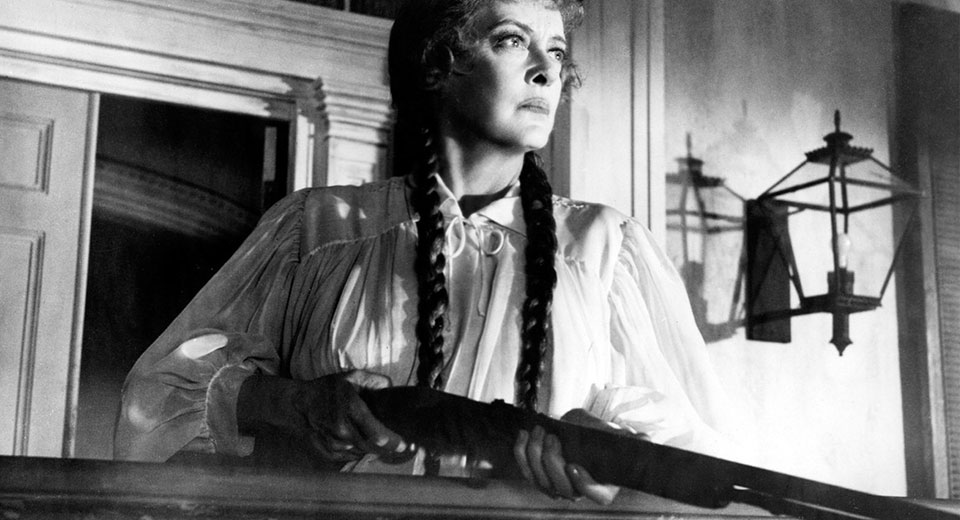 Tonight, BAMcinématek’s Southern Gothic series continues with Robert Aldrich’s Hush...Hush, Sweet Charlotte . The genre suits him. When it calls for the macabre, he goes full-throttle—the first ten minutes of Hush...Hush, Sweet Charlotte build to the brutally trippy meat cleaver decapitation of Charlotte’s lover Jim Mayhew (an early role for Bruce Dern), rendered in deep chiaroscuro, extreme angles, and pulpy gore. But that’s nothing compared to Aldrich’s treatment of Charlotte’s (Bette Davis) nightmarish visions of blinding lightning, cracked mirrors, and decapitated limbs, as she comes to be haunted by the possibility that she was the one who did the cleaving.

Never one to elide social context, Aldrich also honors the genre by rooting Sweet Charlotte in the class dynamics of the post-Civil War South. He invites us into the film by quickly cutting through several imposing glimpses of a Southern plantation house; you could easily mistake these static shots for ghostly photographs, if it weren’t for a distant falling leaf in one of the frames. Charlotte’s father (Victor Buono) booms in voiceover that he built up the property after his father let it fall into disrepair, presumably in the aftermath of Reconstruction (this prologue takes place in 1927). Since Charlotte is his only heir, he threatens Mayhew to break off the affair in order to keep him from inheriting the property. So even if the film breathes life into Charlotte’s turmoil with high camp gleefully dialed to eleven, it ultimately contextualizes her predicament as collateral damage of an aristocratic Southern patriarch.

The mansion is also the film’s narrative center. In 1964, we find Charlotte at odds with the Louisiana Highway Commission, who plans to bulldoze her home to make way for a bridge. Determined to honor her father’s wishes, Charlotte refuses to leave, and does so in style—she arms herself with a rifle and shoves a flower pot over the edge of the balcony, which comes dangerously close to crushing one of the workers. Like everything else in the house, this flower pot is almost comically enormous. Charlotte frequently appears tiny in the corners of cavernous drawing rooms, furnished with antique rococo pieces that seem to swallow her up as soon as she sits down. The house may be Charlotte’s fortress, but it also becomes her psychological battleground, bringing her trauma to life at every turn.

Conceived as a vehicle to replicate the success of What Ever Happened to Baby Jane?, Sweet Charlotte originally cast Joan Crawford opposite Davis, but their personal differences quickly drove Crawford to drop out of the film. Instead, Davis recommended her friend Olivia de Havilland (happy belated 101st!) to fill the role of Charlotte’s cousin Miriam, who travels from New York to help maintain family control of the property. Soon enough, Miriam and the local doctor (Joseph Cotten) provoke the suspicions of Charlotte’s maid Velma (Agnes Moorehead, relishing the drawl), who wonders if profit might be on their minds. Greed may be powerful, but in this haunted house, the real question is whether or not it’s capable of raising the dead.