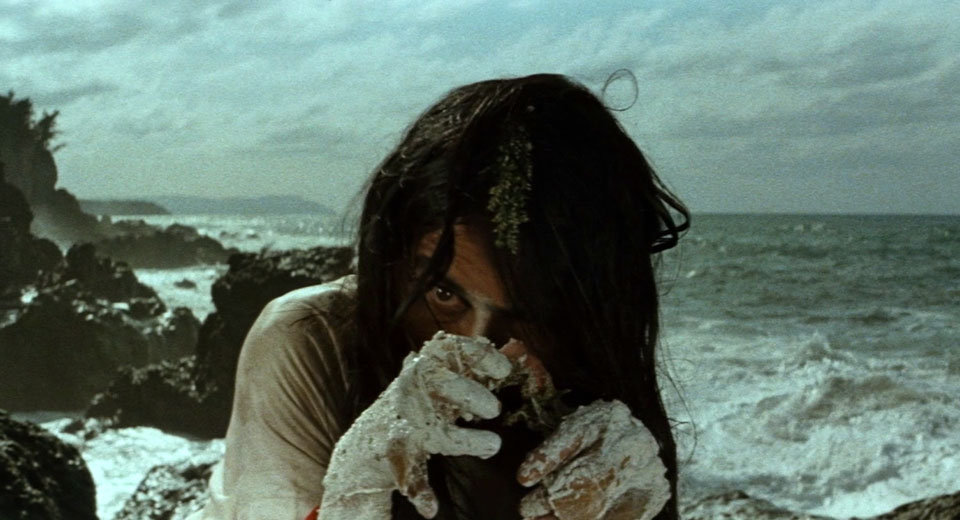 The full Japanese title of Horrors of Malformed Men includes the epithet "Complete Stories of Edogawa Rampo," and although Teruo Ishii’s notorious 1969 film is often described as an adaptation of Rampo’s novels Strange Tale of Panorama Island (1926) and The Demon of the Lonely Isle (1930), it’s more accurately a patchwork assemblage of various stories, characters, and themes found throughout the author’s work. Rampo is one of Japan’s major mystery writers and practitioners of weird fiction, a cross between Maurice Leblanc and Sir Arthur Conan Doyle who’s also associated with the rather self-explanatory cultural movement ero-guro-nansensu, or “erotic grotesque nonsense.” It’s that quality that Ishii leans on, churning out a “laugh to keep from vomiting” kind of film that is fairly described as transgressively avant-garde, owing especially to the casting of butoh co-founder Tatsumi Hijikata as its antagonist.

Teruo Yoshida (Goke, Body Snatcher from Hell) plays Hirosuke, a semi-amnesiac medical student involuntarily confined to a peculiar psychiatric hospital despite his apparent sanity. After killing a sadistic guard and escaping, he begins to trace vague memories of a strange lullaby and a craggy seaside cliff. After meeting a circus performer whom he overhears singing the haunting tune, he receives clues as to the location of the mysterious island — only for his source to collapse dead into his arms from a knife thrown by an unknown assailant. Framed for her murder, Hirosuke is able to disguise himself as a recently deceased, wealthy man to whom he bears uncanny resemblance and shares a strange marking. At this point, the narrative becomes deceptively muted, even as Hirosuke sleeps with his doppelganger’s wife and mistress. Consider it a palette cleanser for film’s second half, which leads him to an island presided over by Jôgorô (Hijikata), the father of his likeness, a deranged madman who uses it as a base for Dr. Moreau-style experimentation. At this point Malformed Men utterly explodes into a gruesomely psychedelic atrocity exhibition of virtually inconceivable human-animal abominations engaged in surreal, Actionist and Happening-style performance set pieces. And eventually Ishii somehow manages to draw together all of the various narrative threads in the most outlandish ways possible, including the delightfully absurd revelation of one of the film’s minor characters as none other than Rampo’s signature sleuth Kogoro Akechi.