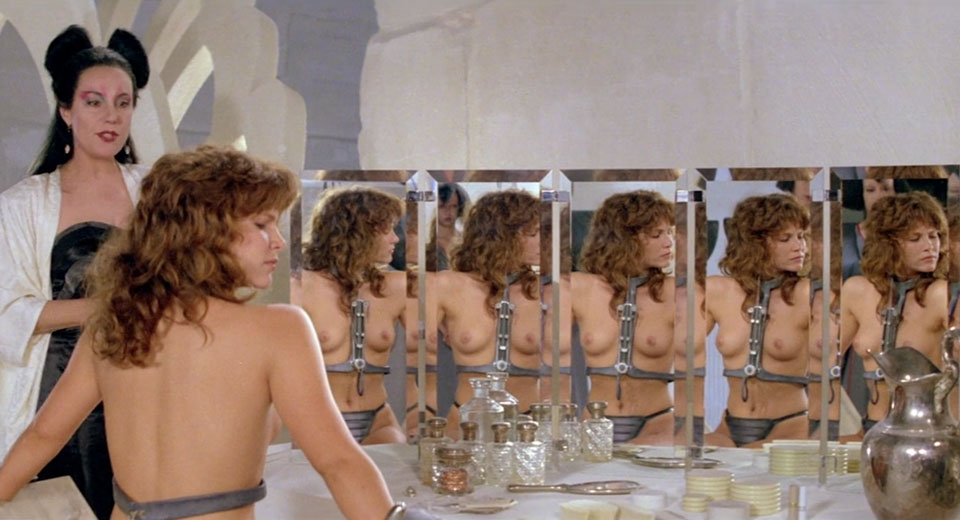 Defying the common sense of English speakers, Just Jaeckin seems to be the actual birth name of the man responsible for the first installment of the Emmanuelle series, premium cable mainstay of the first order. In addition to inaugurating that immortal franchise and thereby making life bearable for pre-internet preteens, Jaeckin drove racecars, adapted D.H. Lawrence, and directed Gwendoline, a 1984 gonzo sci-fi bondage adventure steeped in the same serial lore that gave us Star Wars and Indiana Jones, only with a slight decrease in colonial jingoism and a welcome uptick in flesh.

Tawny Kitaen stars as Gwendoline, a former nun whose attempt to smuggle herself into Hong Kong is thwarted when local crooks gift her to a greasy kingpin. There she hoped to reconnect with her father, an entomologist last seen venturing toward the formidable Land of the Yik Yak where he hoped to discover a rare butterfly and name it for himself. She’s rescured from white slavery by Willard (the disgustingly gorgeous Brent Huff), a sailor cut from the Han Solo cloth of narcissistic rascals. In the uncharted depths of East Asia they are captured by the Pikaho, an isolated gynocracy with only enough enslaved men around to assist in the production of more women. There these champions of lepidopterology must fight for their freedom in scanty neo-Roman armor.

Every object even remotely phallic fuels Jaeckin’s hair-trigger libido. Within minutes of the opening credits, he gives pornographic attention to a crowbar penetrating wood. Such is the film’s sick magic that Willard’s weapon of choice, a grappling hook with a switchblade attachment, carries something of an erotic charge when it impales baddies. Midway through the film is a miraculously titiliating pseudo sex scene involving a piece of straw. Bondage, however, is Jaeckin’s primary preoccupation. Tame compared to its source material, a proto-Crumb comic minus any satirical impulse, the film nonetheless finds countless excuses to cinch ropes around its women or fasten them to benign torture machines Beavis and Butthead might have imagined. There are few places in today’s culture markets for such innocent and celebratory rummaging through soft kinks, making the Alamo’s screening essential for pervs and squares alike.